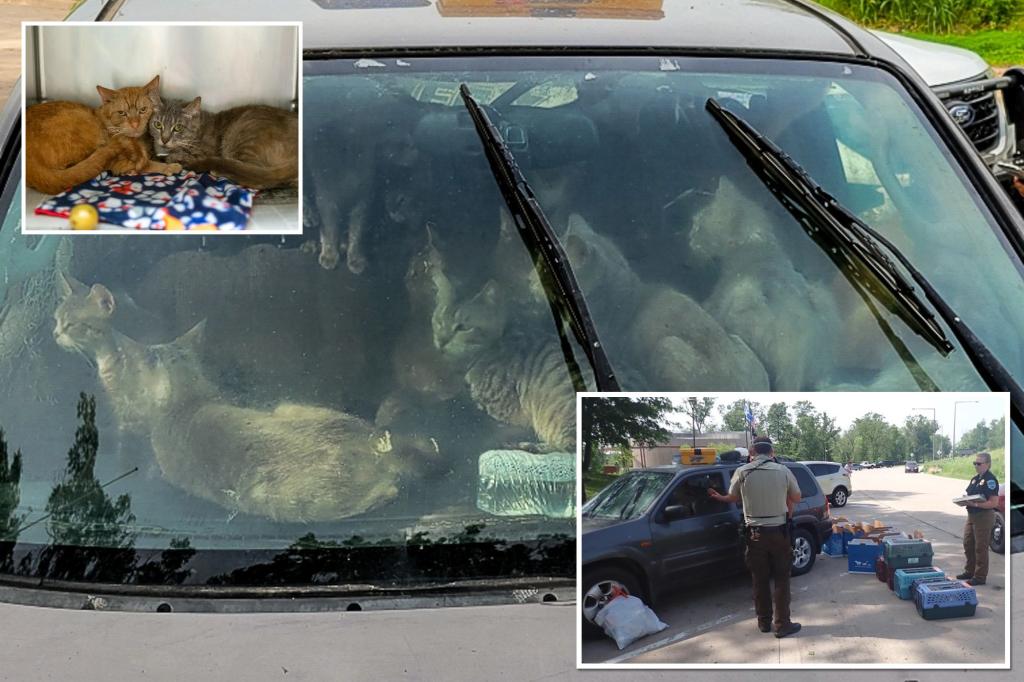 The cats were discovered Tuesday living in the vehicle with their owner, who recently became homeless and didn’t want to leave them behind, Animal Humane Society investigator Ashley Pudas said Wednesday.

“Unfortunately, with the heat yesterday he recognized that it was above and beyond what he was capable of at this time. And he let us help them out,” she said, noting that the man had not left the felines alone.

Temperatures at the rest stop Interstate 35, about 50 miles north of Minneapolis, climbed above 90 degrees on Tuesday.

The owner had been living with the cats — ranging in age from less than a year to more than 12 — “for some time” in the car, the Animal Humane Society said.

Despite the blistering heat and unsanitary conditions, most of them had only minor medical issues.

The man had previously given up 14 of the cats, which were taken by a local rescue organization.

“The gentleman had been living out of his vehicle and obviously utilizing different public areas, and a passerby must have seen him and contacted the local authorities,” Pudas told WDIO.

“While I was out on scene, I was kind of watching everybody as they were coming out one by one,” she said. “And a majority of their problems were kind of common things found with high population of animals.”

Pudas added: “Some hair loss going on, some thinning of the hair, as well as some injuries like lacerations, maybe puncture wounds, just from cats fighting each other, getting too close to each other.”

She said the cats will be tested for illnesses, vaccinated, de-wormed, spayed and neutered before being put up for adoption.

“It’s actually more common than people realize. This is something that as agents we deal with typically weekly as far as high populations of animal,” Pudas told WDIO.

In a statement on Facebook, the AHS said: “Despite the extreme heat and unsanitary living conditions, the cats are in relatively good health – though most are dehydrated and a little untrusting of our helping hands.

“It will take days, if not weeks, to provide the ongoing care each animal needs,” the human society added.