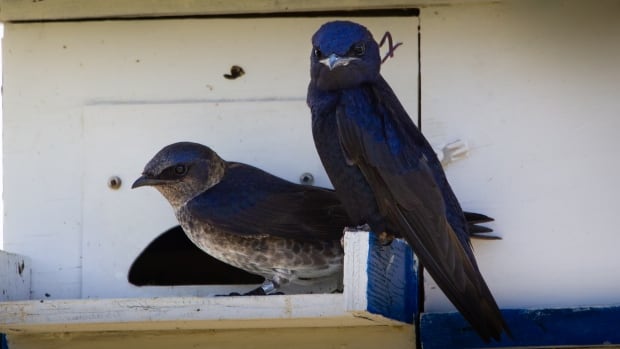 Human residents of Camrose, Alta., are coming together this Saturday to celebrate another group of locals making their home in the city: purple martin birds.

Camrose, about 97 kilometers southwest of Edmonton, has about 100 houses for purple martins, according to the city’s website. Volunteers act as “landlords” and care for the nests.

“This is a bird that can generate a lot of public interest. And so choosing it allowed us to tap into people’s deep desires to connect to wildlife,” Glen Hvenegaard told CBC Edmonton’s Radio Active.

Hvenegaard is a professor of science at the University of Alberta’s Augustana campus, and one of the organizers of the Camrose Purple Martin Festival.

He also founded the Camrose Wildlife Stewardship Society (CWSS) in 2002.

In Camrose, the hobby of landlording for purple martins really picked up when local ornithologist Frank Farley put up nest boxes for the birds in the early 1900s, Hvenegaard said.

Dependent on humans for housing

The purple martin bird is the largest member of the swallow family. The birds migrate to Alberta and across to the eastern United States for breeding. Females lay anywhere between one to six eggs a year.

In the colder months, they can be found in South America, with many nesting in Brazil.

As a species, they are now totally dependent on humans to provide them with housing. Purple martins are also very tolerant of humans and not afraid to interact with them.

A colonial bird — one that nests in groups — purple martins often prefer houses that are apartment-style with multiple entrances to different compartments.

A single apartment-style martin house can home up to 12 birds at one time.

“They arrive in the spring, they attract mates, they build nests. All under the watchful eye of the landlords,” Hvenegaard said.

“It’s like being a surrogate parent to a group of birds in your own colony.”

A festival tomorrow is aimed at promoting the hobby of looking after the small birds. We hear from Glen Hveenegard a local researcher who’s promoting purple martin subculture.

Although numbers for the purple martin birds are declining across North America, the Camrose colony continues to grow, Hvenegaard said.

Rhyleigh Henault is the Greenspace and Wildlife Stewardship Coordinator with the City of Camrose.

She was initially attracted to the birds while at university, and learned more about the birds with her job for Camrose. Part of her job involves supporting the bird landlords.

“We have a volunteer program where citizens can landlord a purple martin house over the summer,” she said.

Henault is a landlord herself and attends to four purple martin houses.

The houses have eight compartments that slide in and out that allow landlords to check on their birds. Landlords can also hold the birds when doing parasite removal.

Henault said people are attracted to the program because they get to follow the journey of the birds from the time they are born until they leave.

“There’s a connection that you can have with this class that is close to you, like having your own resident squirrel in your backyard,” Hvenegaard said.

The annual festival will have guest speakers to talk about bird conservation and workshops where people can learn how to bring purple martins to their homes and manage colonies. It kicks off at 9:30 am Saturday.