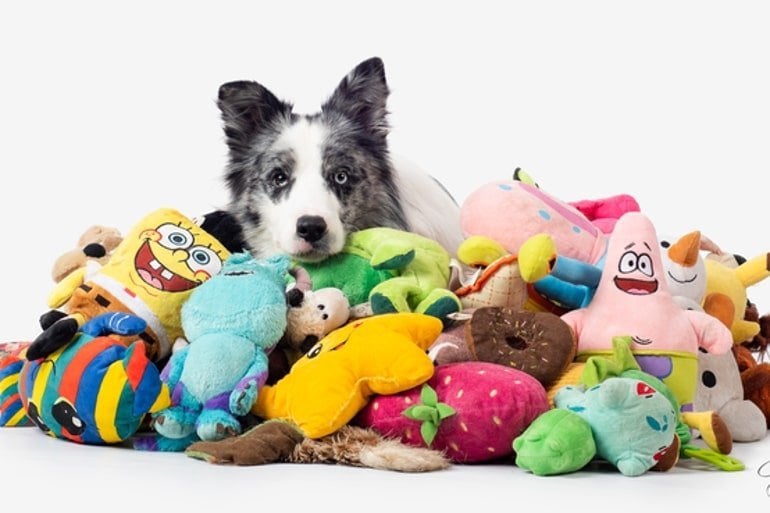 Summary: Dogs have multi-modal mental imagery of items and objects that are familiar to them. When a dog thinks about an object, they imagine the object’s different sensory features.

Many dog ​​lovers want to know what goes on in their furry friends’ minds. Now scientists are finally getting closer to the answer.

In a new study just published in the journal of Animal Cognitionresearchers from the Family Dog Project (Eötvös Loránd University, Budapest) found out that dogs have a “multi-modal mental image” of their familiar objects.

This means that, when thinking about an object, dogs imagine the object’s different sensory features. For instance, the way it looks or the way its smells.

The group of scientists assumed that the senses dogs use to identify objects, such as their toys, reflecting the way the objects are represented in their minds.

“If we can understand which senses dogs use while searching for a toy, this may reveal how they think about it,” explains Shany Dror, one of the leading researchers of this study.

“When dogs use olfaction or sight while searching for a toy, this indicates that they know how that toy smells or looks like.”

In previous studies, the researchers discovered that only a few uniquely gifted dogs can learn the names of objects.

“These Gifted Word Learner dogs give us a glimpse into their minds, and we can discover what they think about when we ask them – Where is your Teddy Bear?” explains Dr. Andrea Sommese, the second leading researcher.

In the first experiment, they trained 3 Gifted Word Learner dogs and 10 typical family dogs (ie, dogs that do not know the name of toys), to fetch a toy associated with a reward. During the training, dogs received treats and were praised for choosing this toy over a few distractor toys.

The researchers then observed how the dogs searched for the targeted toy, always placed among 4 others, both when the lights were on and off. All dogs successfully selected the trained toys, both in the light and in the dark. However, it took them longer to find the toys in the dark.

Only the Gifted Word learner dogs participated in the second experiment. Here, the researchers aimed to find out what these dogs think about when they hear the name of their toys.

“Revealing the senses used by the dogs to search for the named toys gave us the possibility to infer what these dogs imagine when they hear, for example, Teddy Bear,” explains Dr. Claudia Fugazza, co-author of the study.

The Gifted dogs were successful in selecting the toys named by their owners in the light and the dark. This reveals that, when they hear the name of a toy, they recall this object’s different sensory features and they can use this “multisensory mental image” to identify it, also in the dark.

“Dogs have a good sense of smell, but we found that dogs preferred to rely on vision and used their noses only a few times, and almost only when the lights were off,” clarifies Prof. Adam Miklósi, head of the Department of Ethology at ELTE University and co-author of the study.

“Dogs sniffed more often and for longer in the dark. They spent 90% more time sniffing when the lights were off, but this was still only 20% of the searching time”.

To conclude, the dogs’ success in finding the toys and the different senses used while searching in the light and the dark reveals that, when dogs play with a toy, even just briefly, they pay attention to its different features and register the information using multiple senses.

About this animal cognition research news

Little research has been conducted on dogs’ (Canis familiaris) ability to integrate information obtained through different sensory modalities during object discrimination and recognition tasks. Such a process would indicate the formation of multisensory mental representations. In

Experiment 1, we tested the ability of 3 Gifted Word Learner (GWL) dogs that can rapidly learn the verbal labels of toys, and 10 Typical (T) dogs to discriminate an object recently associated with a reward, from distractor objects, under light and dark conditions.

While the success rate did not differ between the two groups and conditions, a detailed behavioral analysis showed that all dogs searched for longer and sniffed more in the dark. This suggests that, when possible, dogs relied mostly on vision, and switched to using only other sensory modalities, including olfaction, when searching in the dark.

In Experiment 2, we investigated whether, for the GWL dogs (N = 4), hearing the object verbal labels activates a memory of a multisensory mental representation.

We did so by testing their ability to recognize objects based on their names under dark and light conditions. Their success rate did not differ between the two conditions, whereas the dogs’ search behavior did indicate a flexible use of different sensory modalities. Little is known about the cognitive mechanisms involved in the ability of GWL dogs to recognize labeled objects.

These findings supply the first evidence that for GWL dogs, verbal labels evoke a multisensory mental representation of the objects.