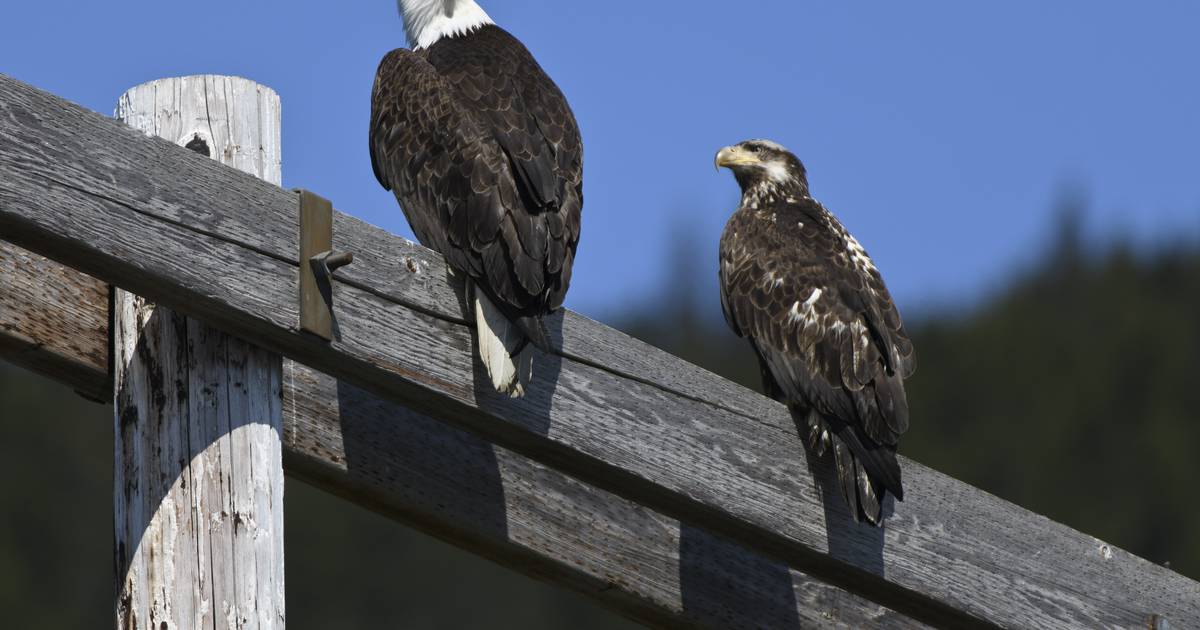 For three days in early May, the Alaska Raptor Center received multiple calls about a bald eagle in the Sitka Historical National Park that appeared lethargic and didn’t fly away even when people got close.

“The first phone call was just, the bird was acting kind of like it had a head injury,” said the center’s avian director, Jennifer Cedarleaf. She figured maybe it had been hit by a car.

Then the center got a call that the eagle was on the ground and “didn’t look right,” she said.

By the time their in-house veterinarian arrived, the bird was dead.

That eagle was one of the first birds in the state confirmed through subsequent testing to have H5N1, a strain of a highly pathogenic avian flu virus that’s been killing thousands of domestic birds and hundreds of wild birds across the country.

The highly pathogenic avian flu that arrived in the state earlier this month is hitting Alaska’s eagles and other wild birds especially hard while, at least so far, largely sparing domestic flocks like chickens.

As of Friday, at least 12 bald eagles confirmed to have the virus had died, as well as eight Canada geese. On Thursday, authorities also announced the virus was detected in a red fox in Unalaska, likely because it had fed on an infected dead bird — perhaps one of the eagles also testing positive there.

Authorities say that given the abundant numbers of eagles and other wild birds here, the virus isn’t expected to put a dent in their numbers.

But this current strain is unusual because of its ability to sicken not only domestic poultry but wild birds, said Andrew Ramey, director of the molecular ecology laboratory with the US Geological Survey Alaska Science Center.

Cases are being detected all over the state, from the Aleutians to Mat-Su to Haines and the Interior.

Nationwide, nearly 40 million birds have died from infections or exposures in 355 commercial and backyard flocks in 35 states so far this year, according to the USDA. At least 1,300 wild birds in 38 states have also been infected, according to the CDC.

During the 2014-2015 avian flu cycle — the last significant outbreak of H5N1 — only about 100 wild birds were detected nationwide, Ramey said.

“So this is very much new and different,” he said.

In early May, bird advocates watching the new strain worried about backyard flocks. Owners were encouraged to keep their chickens or ducks away from waterfowl in ponds, keep feed protected from wild birds or other wildlife and limit free-ranging among their flocks, among other recommendations.

But within a few weeks there was an “explosion” of cases, especially among eagles and geese, said Katie Peterson, avian director at the Alaska WildBird Rehabilitation Center in Houston.

“It started off with just one case in Anchorage,” Peterson said. “And now it’s kind of everywhere.”

“We’re so spread out that sometimes we’re hiking in a mile to go rescue an eagle,” she said. “There’s just so few people, compared to the large expanse of land we have here, that it’s so much harder to get accurate information.”

The center has stopped accepting new sick, injured or orphaned birds for rehabilitation as a way to protect the birds that already live there.

“It’s a very scary time,” Peterson said. “Because if one of our resident (birds) get it, it’s very likely that all of them will get it, and it very well could kill all of them.”

Bird TLC in Anchorage has been forced to euthanize five birds — three eagles, a Canada geese and a raven — because they exhibited symptoms consistent with avian flu, according to center spokeswoman Laura Atwood. The birds were mostly brought in by the public or referred from other centers.

Bird TLC has no space to quarantine infected birds from one another, Atwood said, and can’t risk contaminating resident birds.

They’ve been testing most of the birds they take in, even those not exhibiting symptoms of the virus — about 24 in total. Test results for two eagles and a goose have already come back positive.

Officials here say that precautions backyard flock owners have taken to protect their birds appear to have been successful so far.

As of late May, the highly pathogenic strain of avian influenza had been detected in just one backyard flock in Mat-Su.

Gerlach recently said people with chickens and other domestic birds “are doing a fantastic job protecting their flocks” and keeping down the rate of infection. That’s promising for poultry exhibits at fairs and shows later this summer.

Alaskans are also doing a good job of reporting potential cases of avian influenza, he said.

Many of the 20 Alaska cases in wild birds have been identified by members of the public who noticed something was wrong and called the Alaska Sick or Dead Bird Hotline, 866-527-3358, which is managed by the US Fish & Wildlife Service.

“People are aware and are reporting, and then getting samples in. And the more samples we get, the more reports we get, and we can get a better idea of ​​what the distribution of cases around the state is,” Gerlach said.

[An orphaned owl returns to the Anchorage wilds]

H5N1 is highly contagious, much like COVID-19 or influenza strains that can infect humans. Key spreaders are migrating geese and ducks that leave highly contagious droppings as they move across large areas. Symptoms in infected birds include neurological symptoms, fatigue, swollen comb or wattles, difficulty walking, nasal discharge and decreased egg production.

Because there is no treatment, the virus often means death, especially for poultry and raptors like hawks, eagles or owls that exhibit mortality rates between 70% and 100% once infected.

The red fox in Unalaska, where the virus was also detected in eagles, joins other foxes in Michigan, Minnesota, Wisconsin and Ontario to test positive for the virus, according to the Alaska Department of Fish and Game. No cases of the H5N1 avian influenza strain have been identified in any other domestic or wild mammals, but dogs and cats may be susceptible to it, the agency said this week, recommending that pet owners keep animals away from dead wildlife including birds.

According to the federal Centers for Disease Control and Prevention, transmission to humans or other mammals is very rare — just one human infection with current H5N1 bird flu viruses was reported in January, involving a person in the United Kingdom who did not have any symptoms.

Ramey said that because this outbreak is new, it’s hard to say how long it might last in Alaska, and how many birds could die. But he was optimism about the overall impact.

“There’s certainly a numerous detections, but it’s hard for me to imagine that at the current levels of reporting, that there’s going to be population-level impacts on species that are abundant,” he said.

Cedarleaf in Sitka has had nightmares about dead birds in her yard in recent weeks. She’s made a point to spend time with family and pets, and in the sunshine, to keep her spirits up.

“We do this because we want to help birds, and we want to try and get them back out there in the wild, and not being able to do one of the main parts of our mission is a little bit devastating,” she said.

The Raptor Center recently identified two additional birds — also bald eagles — who are likely sickened with the virus. Test results, which take about a week to process, have yet to confirm that.

Of the second eagle, Cedarleaf said when she approached the bird, “it stood up and was very stumble-y and holding its wings out to the side, not able to keep its balance very well.”

After the first eagle’s test result came back positive, the center made the difficult decision to stop accepting new birds to protect their resident birds and avoid spreading the virus.

“So basically what we’ve been doing is euthanizing almost everything that we pick up,” she said. “It’s so depressing.”