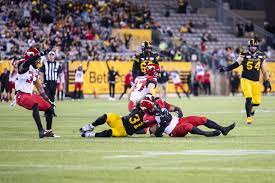 This week we learned several things about the 2022 Hamilton Tiger-Cats. Home-field advantage makes a big difference for these Tiger-Cats. The Tiger-Cats have the talent to play with any team in the CFL, but they must get better at finishing. It has been popular for the last 2 weeks to criticize the defense for not finishing games.

While it is true that the Tiger-Cats played evenly with their opponents until the end of the 4th quarter this, the concept of finishing does not lie on the defence. The offence needs to finish drives, they need to finish runs, they need to finish catches, and they must protect the ball at all costs. Another aspect of the game was mentioned by Dane Evans after the game “momentum is always the best player on the field” Evans said. When opponents are building momentum the Tiger-Cats need to have answers to reverse those trends.

On the surface, we see that the Tiger-Cats built a 24-point lead and then allowed the Stampeders to have the opportunity to overcome that lead and steal a road win in Hamilton. But if we take a deeper look into the statistics of the game we will see that the Tiger-Cats did not effectively control what they control. Each week we look at 5 analytical metrics that will allow the Tiger-Cats to win the game that week if they can win in at least 3 out of 5 of those areas. Those metrics are known as 5 Growling Questions, let’s see how the Tiger-Cats measured up in these areas.

Will the Tiger-Cats defense be able to disrupt the stampeders quarterbacks by producing 4 or more quarterback sacks?

This week the answer was no, the Tiger-Cats did get 1 quarterback sack this week. That sack came from defensive back Tunde Adeleke. When the defense can generate quarterback sacks it puts the opponent’s offence behind the chains and forces the offence out of their comfort zone. In the first 2 weeks of the 2022 season, the Tiger-Cats defense has not been able to consistently pressure opposing quarterbacks. This week the result was Bo Levi Mitchell going 28 for 42 for 313 yards, 2 touchdowns, and only 1 interception.

Can the Tiger-Cats run defense control the line of scrimmage and hold running back Ka’Deem Carey to less than 4 yards/carry?

The answer to this question is no. But the situation is more complex than it appears. When Ka’Deem Carey was in the game he had 2 rushes for 14 yards which is an average of 7.0 yards/carry. But early in the game, Carey left the game with an injury. So did the run defense hold the Stampeders committee of rushers to less than 4 yards/carry? Well, they almost accomplished that goal. The Stampeders ended the game averaging 4.1 yards/carry. In a game as close as this week’s matchup, the ability to control the tempo of the game by picking up 1st downs with a good running game is a huge advantage.

Will the Tiger-Cats offensive line show enough improvement to protect quarterback Dane Evans by giving up less than 3 quarterback sacks?

The answer is no, but they were very close to accomplishing this task. On 19 carries for 74 yards, the Tiger-Cats averaged 3.9 yards/carry. When an offence can run the ball well it can control the tempo of the game. If on every non-scoring possession, the Tiger-Cats could pick up an additional 1st down, the task the stampeders faced of coming back from a big deficit would have been much more difficult if not impossible.

Will the Tiger-Cats be able to win the +/- turnover battle?

The answer is no, the Tiger-Cats were -2 for the game. The Tiger-Cats defense was only able to produce 1 takeaway by intercepting a Bo Levi Mitchell pass. Hamilton turned the ball over 3 times, with 1 fumble and 2 interceptions. A fumble by Dane Evans on a quarterback sneak allowed the Stampeders to score a defensive touchdown to tie the game at 27-27. And then in overtime, an Evans pass was tipped into the air by Sean Thomas-Erlington which resulted in an interception that sealed the win for Calgary in overtime.

Hamilton won in only 1 out of 5 of these key areas in Week 2. The result is that the Tiger-Cats ended regulation tied 30-30 with the Stampeders. But the reality for the Tiger-Cats is that while they are getting better and competing well, they are 0-2. This Friday they face the task of traveling to Winnipeg to face the Blue Bombers. With the recent history between these teams, Hamilton will be motivated to play well, finish, and get a huge win.

Full coverage of the 2022 season on CFL News Hub.