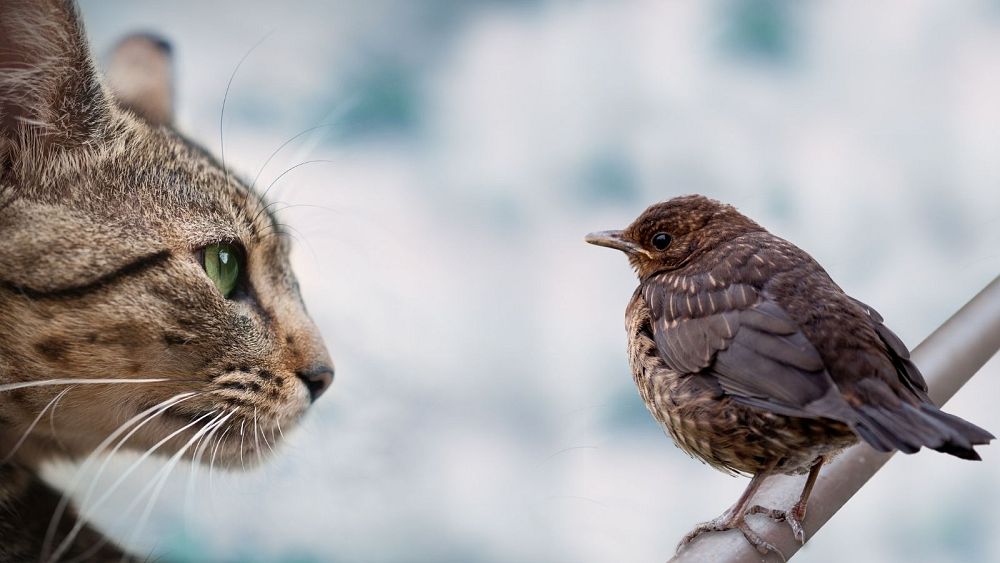 Cat owners in the German town of Walldorf have been ordered this week to keep their pets indoors until the end of August to protect a rare bird during its breeding season.

The decree is designed to help save the crested lark, which makes its nest on the ground and is therefore easy prey for feline hunters.

The bird’s population in Western Europe has declined sharply in recent decades. Although it is listed as a species of least concern in Europe by the International Union for Conservation of Nature (IUCN).

“Among other things, the survival of the species depends on every single chick,” authorities in Walldorf said.

The rule applies to all cats in the southern part of the town and will be repeated for the next three years from April to August.

Owners risk a fine of €500 if their cat is found roaming outside and could be slapped with a penalty of up to €50,000 if their pet injures or kills a crested lark.

Should I keep my cat indoors?

If you live in Walldorf, the decision is no longer in your hands. But for those elsewhere the answer may not be so clear-cut.

“Suddenly preventing cats that are used to going outside from doing so, means massive restrictions and stress for the animals,” Deutscher Tierschutzbund, Germany’s largest animal welfare organisation, said in a statement to Euronews Green.

“The negative influence of cats on the population of songbirds is in any controversial case and, to our knowledge, has not yet been proven for the crested lark in Walldorf.”

The organization supports measures to protect the crested lark but believes no animal can be treated as second class.

“Defining domestic cats as ‘culprits’ for the endangerment of certain bird species also means letting them take the blame for the fact that humans have destroyed habitats and food supplies for wild species over a long period of time, thus threatening their existence,” the conclusions.

This sentiment is echoed by Daniela Schneider, a campaigner for Four Paws Germany.

“The influence of intensified agriculture, monocultures, insect mortality, and increasing land development is probably greater than that of some cats hunting birds,” she tells Euronews Green.

“These causes are caused by humans. It would be better to fight the actual causes than to blame cats for this.”

Are cats a danger to wildlife?

The debate over whether cats should be free to roam can be a controversial one. The European Pet Food Industry found that 26 per cent of all households in Europe own at least one cat. This inevitably leads to a quarter of the population having strong feelings on the matter.

A study in 2013 estimated that free-ranging domestic cats in the US alone kill around 2.4 billion birds and 12.3 billion mammals annually. However, the authors acknowledged that unowned cats cause the majority of this mortality.

The most recent figures from the Mammal Society say that cats in the UK catch up to 100 million animals over spring and summer, including 27 million birds. The most frequently caught species of bird according to them are house sparrows, blue tits, blackbirds and starlings.

Despite these statistics, the UK’s largest conservation charity, RSPB, says that there is no clear scientific evidence that this is causing bird populations to decline.

“Many millions of birds die naturally every year, mainly through starvation, disease or other forms of predation,” they state on their website.

“It is likely that most of the birds killed by cats would have died anyway from other causes before the next breeding season, so cats are likely to have a major impact on populations.”

In Walldorf, regional newspaper Rhein-Neckar-Zeitung reported on Wednesday that the head of the local animal protection association plans to take legal steps to challenge the “disproportionate” order.

Cat owners affected by the new decree can exercise their right to object to it until mid June.