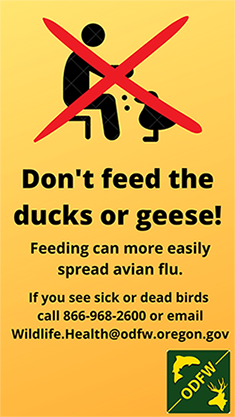 SALEM, Ore.—Several Canada goose goslings collected from Alton Baker Park in Eugene have tested positive for highly pathogenic avian influenza (HPAI), and a larger outbreak is suspected as more sick and dead waterfowl have been observed at the park. A red-tailed hawk from Eugene and an osprey collected from Dorena Reservoir (east of Cottage Grove) May 10 have also tested positive.

These cases mark the first known detections of the new avian flu strain in wild birds in Oregon. Earlier this month, the first Oregon case in a backyard poultry flock was confirmed in Linn County and one additional case has been confirmed in Lane County.

The risk of HPAI to human health is low, according to the US Centers for Disease Control and Prevention (CDC). The only known human case involving infection and illness was someone involved in the culling of presumptively infected poultry at a commercial farm in Colorado, according to the Colorado Department of Public Health and Environment.

With the detections this week, it is more important than ever to avoid close contact with waterfowl (ducks and geese) this spring and summer. This includes feeding waterfowl which congregates susceptible birds and enables the disease to spread between birds more easily.

If you see sick or dead wild birds, do not collect or handle them but report the incident directly to ODFW at 866-968-2600 or Wildlife.Health@odfw.oregon.gov. ODFW staff will be surveillance and collecting/testing sick and dead wild birds to monitor for the presence of disease. Also note that Oregon’s wildlife rehabilitators are not accepting sick ducks and geese at this time in order to protect other avian patients and education birds in their care.

If you have domesticated backyard birds such as poultry, increase your biosecurity and keep your birds separated from wild birds, especially waterfowl. If you have poultry that appears sick or has died of respiratory or neurological disease call 503-986-4711 (Alt Phone: 1-800-347-7028). For more tips visit the Oregon Department of Agriculture website at https://oda.direct/AI or en español at https://oda.direct/AIESP

Turkey hunting season is currently open in Oregon and it is possible for turkeys to become infected with avian flu. Waterfowl hunting seasons begin in fall and run through January. The risk of the disease spreading to a hunter is low but hunters should always wear gloves, thoroughly sanitize equipment that comes into contact with wild birds, cook birds to an internal temperature of 165 degrees and never consume a bird that appears sick or is found dead . Visit https://www.dfw.state.or.us/wildlife/health_program/avian-flu/index.asp for more information.

This strain of avian flu is not known to be a threat to songbirds, but keep your bird feeders clean and take them down if you see sick or dead birds near your feeder or in your neighborhood. More information is available at https://www.dfw.state.or.us/wildlife/health_program/dead_bird_reporting_protocol.asp

About avian influenza
Avian influenza is a disease of birds caused by a bird-specific influenza Type A virus. This virus has been documented in more than 100 different species of wild birds worldwide. The first 2021/22 detection of Eurasian strain (EA) highly pathogenic avian influenza, specifically referred to as H5N1, in North America occurred in December 2021 in Newfoundland and Labrador, Canada. It was believed to have entered North America in an infected wild seabird or migrating waterfowl.

The virus currently circulating in Oregon and other parts of the world is very contagious among birds, and can sicken and even kill many bird species, including chickens, ducks, and turkeys. The USDA and CDC report that infected birds can shed avian influenza A viruses in their saliva, nasal secretions, and feces. Susceptible birds become infected when they contact the virus after it is shed by infected birds. Birds also can become infected through contact with surfaces that are contaminated with virus from infected birds.

Wild birds that typically carry the virus include waterbirds (such as ducks, geese, swans, gulls, and terns), and shorebirds (such as plovers, and sandpipers). Dabbling ducks such as (mallards, pintails, and wigeons) serve as reservoirs hosts for avian influenza A viruses although it often does not cause disease in these species.

The disease can also infect raptors (hawks, eagles) that prey on or consume sick or dead waterfowl. The wild bird species in Oregon most at risk from this strain of virus currently appear to be all waterfowl, shorebirds, eagles and scavenging species such as crows, ravens and turkey vultures.

Currently, the outbreak has affected 68 species in 1326 positive detections. Of the 40 states with infected birds, 37 states have HPAI detected in wild birds, 27 states with the virus in backyard poultry flocks, and 19 states have had infections in commercial poultry operations. All 10 Canadian provinces have HPAI infections in wild birds or poultry.

While avian flu can kill multiple birds at a specific outbreak location, wildlife managers in other areas have not measured significant impacts to wild bird populations at this point. Susceptible species that occur at lower population numbers may be at greater risk. ODFW does not expect the disease to have a significant impact on the waterfowl population in the Pacific flyway that includes Oregon.