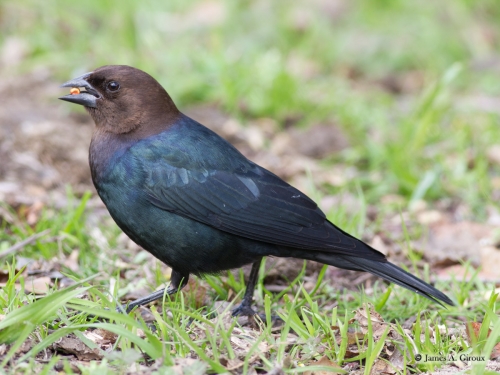 AUSTIN (KXAN) — Here’s the Central Texas bird forecast for the month, courtesy of Travis Audubon. Learn more about Central Texas birds and bird-related events for all ages at travisaudubon.org or by calling (512) 300-BIRD. Follow us on Facebook as well.

Invasion of the Nest Snatchers

In Central Texas we have two species of cowbirds. June is a good month to look for both adults and juvenile birds. Brown-headed and bronzed cowbirds lay their eggs in other songbirds’ nests, letting those species raise their young. It’s a good deal for the cowbirds, but problematic for the host species affected. Cowbirds don’t have to build a nest, incubate eggs and feed young, all of which are physically demanding. Cowbird offspring hatch earlier, grow faster and outcompete the host species’ nestlings, which often die as a result. It’s easy to vilify these interlopers, but their breeding biology raises interesting questions. Since cowbirds are raised by other species, how do they know they are cowbirds? A risk of being raised by foster parents is the cowbirds may think they are the host species, learn their songs and attempt to breed with them. Lab experiments have borne this out, with cowbirds raised with canaries forever confused. It turns out fledgling brown-headed cowbirds leave their foster parents’ care at night to sleep away from them in open fields, where they learn the ways and songs of fellow cowbirds roosting there. More recent research has found the area in the brown-headed cowbird’s brain that is hard-wired to recognize a sound that triggers the start of their journey to cowbird identity. The researchers call this a chatter password, which is the sound female cowbirds make in response to potential mates and in territorial display.

Brown-headed cowbirds are common year-round in the Austin area (in the fall and winter they gather in large flocks with other blackbirds, but in summer they disperse to breed). They used to follow the bison, not staying too long in one place, so their impact on local populations of host species was lessened. Once bison were gone, the seed-eating cowbirds followed cows for the insects they flushed and are now found in open areas such as parks, agricultural fields and at feedlots. The fragmentation of habitat caused by development and changes in land use have allowed cowbirds access to more nesting birds as their range expands. Brown-headed cowbirds have been recorded parasitizing the nests of over 220 different species of birds. These medium-sized songbirds, weighing 1.5 ounces and a little smaller than Northern Cardinals, have successfully parasitized nests of tiny blue-gray gnatcatchers (.21 ounces), black-capped vireos (.3 ounces) and endangered golden-cheeked warblers (. 34 ounces). If you see a songbird feeding a drab brown bird much larger than it is, you are seeing “brood parasitism” in action. Cowbirds are prolific egg producers too. It is not unusual for one female cowbird to lay 40 eggs in one season. Compare that to the four or five eggs another songbird might have. This phenomenon raises other questions, too.

Why don’t the host species recognize cowbird eggs and damage or eject them? Some do, including the American robin. Why don’t they abandon the parasitized nest? Some do, like the yellow warbler, which also might build a nest over the one that has a cowbird egg in it. Are cowbirds horrible parents? It was thought that female cowbirds disappeared once the egg-laying was done, but it turns out they stay in the area to monitor the nests. If a cowbird notices one of its eggs is ejected, sometimes it will destroy the other eggs. Some ornithologists call them the “cowbird mafia” for this retaliatory behavior.

Brown-headed cowbirds all have dark eyes. The males are well-named as they have brown heads that contrast with black bodies and wings. Females are gray brown with white throats — note their skulky behavior as they look for nests. Juvenile birds are gray brown with scaly backs and distinct streaking on their breasts. Look for brown-headed cowbirds at city parks where they often perch high in trees. They will visit backyard feeders. Listen for the male’s two note gurgle call, followed by a higher pitched “gliii.” The female has a sputtering chatter.

The bronzed cowbird is a southern/southwestern species expanding its range. It is a recent addition to the Austin landscape, where it is still uncommon. It spends the winter in Mexico and Central America and is noticeable here in the summer months. Bronzed cowbirds are slightly larger and heavier than brown-headed cowbirds and appear to target slightly larger host species. The males like to display for the females. Often they use a mowed area such as a park or golf course, where they raise their neck, back and body feathers, then bow, lowering their heads. Sometimes they perform a hovering flight above the females. The males are shiny jet black with blue-black wings and red eyes. Females are duller colored but red-eyed too. Places where they have been spotted recently include Emma Long Metro Park, Woodlands Park in River Place and Hornsby Bend.

Check the Travis Audubon events calendar for details on field trips, classes and other events. Beginners are welcome on all field trips. Get outdoors with a knowledgeable leader and learn more about our beautiful Austin-area birds. Most field trips fill quickly, and most require registration.

Commons Ford Metro Park Beginners’ Bird Walk: Saturday, June 4, 7:30 – 9:30 am If you are just getting interested in birds, this is a good place to start. If you can’t join this walk, mark your calendar for the first Saturday of each month and check the calendar to find out the location. Another bird walk at Commons Ford takes place there June 25.

Northwest Park: Saturday, June 18 from 7 to 9 am You may be surprised at the variety of bird life in this centrally located park close to Shoal Creek.

There are also bird walks in western Travis County including one at Travis Audubon’s Chaetura Canyon in the Apache Shores area June 11, and another at Travis Audubon’s Baker Sanctuary June 13 off Lime Creek Road. Explore Turkey Bend Recreation Area June 26.