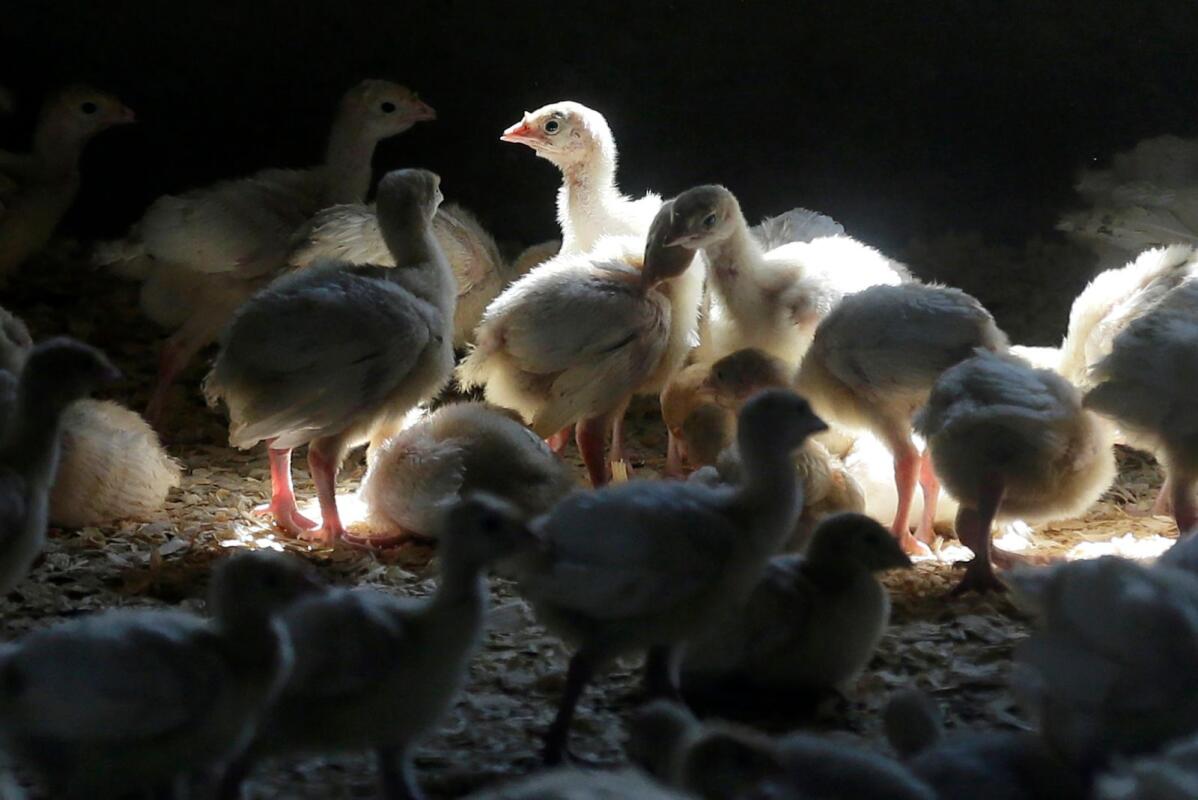 Turkeys stand in a barn in August 2015 on a turkey farm near Manson, Iowa. The bird flu outbreak that year was the most expensive animal health disaster in US history. (Charlie Neibergall/Associated Press)

OMAHA, Neb. — A bird flu outbreak in the US that led to the deaths of more than 40 million chickens and turkeys and contributed to another spike in egg and meat prices appears to be waning, but experts caution the virus hasn’t disappeared and worry surge could take hold this fall.

The number of birds culled to limit its spread dropped from a peak of almost 21 million in March to less than 800,000 in May. However, more than 2 million birds have been killed already this month after infections were discovered at two large farms in Colorado.

“The numbers in the dashboard do tell a story, but we are not ready to say the outbreak is winding down,” said Richard Coker, a spokesman for the Animal and Plant Health Inspection Service division of the Department of Agriculture. “We remain vigilant and encourage producers to continue to practice strong biosecurity.”

Some state and industry officials are optimism that the outbreak is ending, although no one is quite ready to relax.

Iowa Agriculture Secretary Mike Naig said the virus still poses a risk because more cases are being reported, but that “it really does feel like we’re on the tail end of it for this year.”

When a case of the highly pathogenic virus is found, officials kill the entire flock to limit its spread. The virus doesn’t discriminate between backyard flocks and massive egg farms; flocks of all sizes have been infected.

Iowa was the hardest hit

Iowa, the nation’s leader in egg production, was by far the hardest hit state with 13.4 million birds lost. No cases have been reported in the state since May 4, likely because migrating wild birds, which are blamed for spreading the virus, have moved out of Iowa.

An outbreak in 2015, when 50 million turkeys and chickens were killed, remains the most expensive animal health disaster in US history. The government spent nearly $1 billion then to deal with infected birds, clean up barns and compensate farmers. The USDA has so far approved $793 million to cover costs this year.

National Turkey Federation spokeswoman Beth Breeding said the government payments “keep those losses from being catastrophic everything,” but they don’t cover. For example, farmers lose income because they can’t raise birds while their properties are being disinfected.

Food prices have increased 10 percent overall this year, exceeding the 8.6 percent inflation reported last month. Egg prices soared the most, jumping 32 percent, while poultry prices are up nearly 17 percent. But agricultural economists say that while the bird flu outbreak contributed, spikes in the cost of feed, fuel and labor are much bigger factors.

It didn’t help that the outbreak peaked just as demand for eggs was highest around Easter, driving prices higher.

Economists expect egg and meat prices to ease this summer as farms are able to build back their flocks.

“I think that there is going to start being some relief,” said Jada Thompson, an agricultural economist at the University of Arkansas.

The summer heat should help kill off the disease, but experts worry that the latest version of the virus may be hard enough to survive the season, leading to a new outbreak when wild birds migrate later in the year.

“We may have an even bigger peak this year in the fall, who knows?” University of Georgia researcher David Stalknecht said. encouragement.”

The prospects for a bird flu vaccine are uncertain; Foreign markets are reluctant to import meat from inoculated birds, and vaccination can hide the presence of the virus, meaning farmers would have to spend more to increase testing of their flocks. And vaccinated birds can still fall sick, just like vaccinated humans.

“I personally do not see vaccine as something that’s going to be used in the United States,” said John Clifford, the former US chief veterinary officer who oversaw the USDA response to the 2015 outbreak. “Countries that don’t export may feel different. We can’t afford to lose those markets.”

Steps to stop the spread

There is only so much farmers can do to limit the spread of bird flu. Farmworkers already usually have to shower and change clothes before they enter a barn, and tools for each barn are kept separate.

Emily Metz, CEO of the American Egg Board trade group, said some farmers have invested heavily in combating the virus, including upgrading ventilation systems and installing laser light systems to ward off wild birds.

“If it does linger or come back, we’re prepared. We’re not letting our guard down,” Metz said. “The improvements our producers have made in terms of biosecurity are part of their everyday business.”