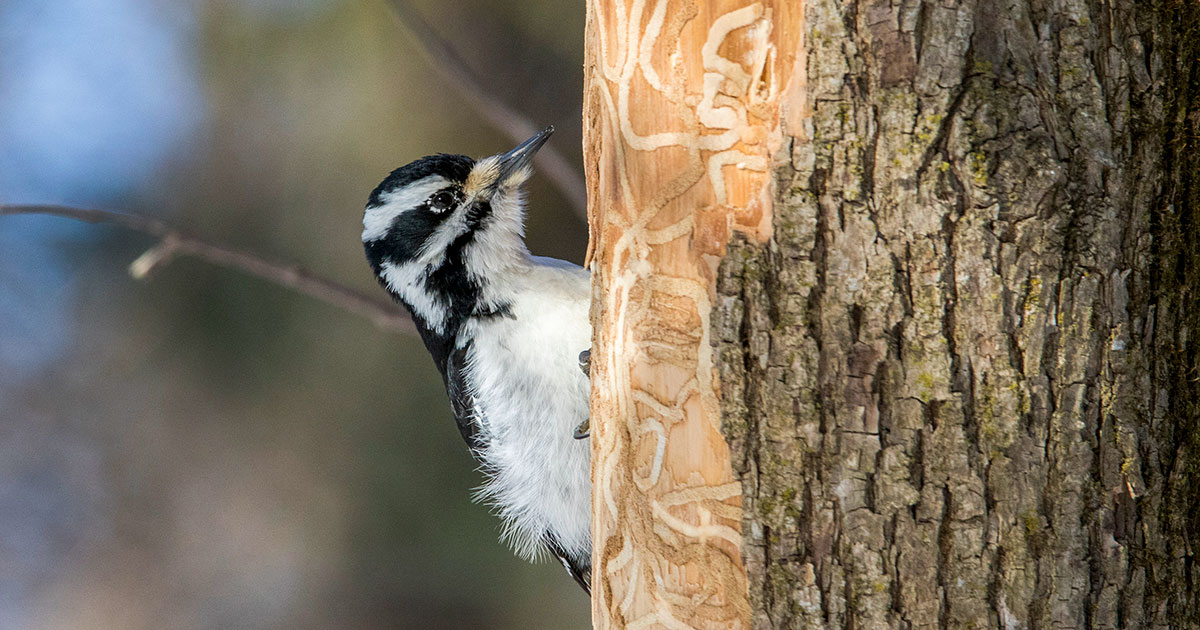 Sometime in the early 1990s, the generally accepted origin story goes, a bargeload of freight from Asia arrived in metro Detroit. Onboard were stowaways that would transform North American forests: insect larvae pupating in packing crates made of Eurasian ash. Having fattened on inner bark while the trees still stood, the larvae survived both the sawmill and an overseas voyage to emerge in southeast Michigan as iridescent green beetles called emerald ash borers. They flew off with one purpose—to find more ash trees. They did.

While this continent’s 16 ash species have evolved chemical defenses to ward off native pests like the clear-winged ash borer, they were defenseless against the new invader. The adult beetles laid eggs on ash bark, and when the eggs hatched, the larvae burrowed in and began to feast, fatally cutting off the flow of water and nutrients in each infected tree. By 2002, when foresters first noticed ash trees dying en masse in Michigan and Ohio, no longer possible. The beetles not only flew to new areas but hitched rides in loads of firewood and deliveries from plant nurseries. Today they’re in 35 states along with 5 Canadian provinces. In Michigan alone, an estimated 40 million ash trees have succumbed. Many cities have seen swaths of street trees wither and die. In all, the United States has lost hundreds of millions of its roughly 8 billion ash trees.

Economically, culturally, and ecologically, the loss of these stalwart hardwoods is devastating. In some areas, emerald ash borers kill more than 99 percent of the trees they infect, an urgent concern for the logging industry, which values ​​standing ash timber at $280 billion. For many Native craftspeople, black ash is a priceless basket-making material. And roughly 100 insect species rely wholly on trees in the ash genus for all or part of their life cycles. When a forest’s ash trees die off at once, it opens up the canopy and lets sunlight through, which can benefit fast-growing invasive vegetation—generally a bad thing for birds. “Invasive plants don’t host the same diversity of insects,” meaning they offer less food for insect-eating birds, says Steve Hagenbuch, a conservation biologist with Audubon Vermont. “Non-native fruits also lack the nutrition of native species, which is critical for fall migration.”

Two decades after the emerald ash borer was first detected on this continent, despite a national quarantine to prevent the movement of infested wood—a policy the US Department of Agriculture (USDA) abandoned as ineffective in 2021—the devastation continues apace. However, while foresters have given up on eradicating the invasive beetle, there are encouraging signs that management actions can keep its numbers low enough to give ash forests a chance to regenerate. Slowing the beetle’s spread is critical to that end, and a growing body of research suggests that, in the fight to save these trees, birds are some of our native allies.

Woodpeckers, along with Brown Creepers and White- and Red-breasted Nuthatches, eat insects found in or on tree bark, including ash borers. Not long after scientists first observed the beatles on North American trees, they noticed that woodpeckers—especially Downy, Hairy, and Red-bellied—were prolific predators. Project Feederwatch, a community science organization, found between 2002 and 2011 that Red-bellied populations spiked where ash borers proliferated. While they and other woodpeckers didn’t save the trees, they severely cramped the pest’s numbers, typically killing about 40 percent of emerald ash borers in a given area.

“Woodpeckers are amazing at finding larvae,” says Joe Elkinton, an entomologist at the University of Massachusetts Amherst. “Along with biocontrol they’ll be key in bringing equilibrium to borer populations and giving ash a chance.”

By biocontrol, Elkinton means managing a pest species by releasing natural enemies from its native range. In this case, the go-to insects are parasitoid wasps, a diverse set of species without stingers that lay eggs in their host insects, which then feed the growing wasp larvae. Following the emerald ash borer invasion, scientists traveled to China and found three wasps that exclusively target the species. A later trip identified a fourth species in Russia. One lays its eggs only on emerald ash borer eggs, while the others lay theirs in the several grub phases the pests go through during the one to two years they spend in the tree.

After a rigorous testing regimen wouldn’t make sure the wasps’t prey on native insects, USDA scientists began releasing them in Michigan and Ohio in 2007. A decade later, with those sites showing clear signs that the wasps were becoming established and young ash trees were surviving, researchers conducted a series of studies in Connecticut, New York, and Massachusetts. The scientists wanted to see if the wasps’ success would translate to different regions, but they also took a closer look at the role birds play in controlling ash borers.

Together, birds and insects are proving to be a powerful force in the fight to save ash forests.

One study concerned that hungry woodpeckers might shrink the army of helpful wasps by eating ash borer larvae in which the parasitoids had lain eggs. To find out, USDA Theresa Murphy—at the time a student in Elkinton’s lab—placed screens over some heavily infested trees so woodpeckers couldn’t get at the larvae. While fewer wasps survived where woodpeckers could access the trees, the foraging birds didn’t have significant enough an impact to prevent the introduced insects from becoming established.

“Woodpeckers are generalists,” says Juli Gould, one of the lead biologists who identified the beneficial wasp species. “They go for the most abundant, highest food reward they can find.” Larvae of one of the wasp species spin silk cocoons that are hard to eat, Gould says, while another’s develop inside the borer larva and, when ready to pupate, spill out into the gallery—the tunnel the ash borer makes in a tree. They’re a lesser reward than the pudgier ash borer larvae and don’t all get vacuumed up. “If woodpeckers are finding lots of galleries with difficult, less nutritious food, they’ll move on.”

More recently, A 2021 study found that the wasps have not only gained a foothold but are expanding their range, traveling well beyond study sites and reproducing in at least 22 states. Other research has shown that, as they spread across the continent, the wasps are inflicting serious damage on the invasive beetles: Collectively they kill more emerald ash borers than woodpeckers do, with one species, Spathius galinaealone capable of reducing the pest’s numbers by up to 57 percent.

Together, birds and insects are proving to be a powerful force in the fight to save ash forests. “We’ve found in both Michigan and the Northeast that with the woodpecker and wasp combination we have young trees without one late-stage emerald ash borer larva,” Gould says. “This gives us hope.”

There’s no doubt that ash trees in North America will continue their steep decline. And even with a promising control program taking shape, hurdles remain; producing enough wasps in laboratories torelease into the wild, for instance, is a challenge. However now that studies have shown that peckers don’t hinder the wasps from becoming, it’s established wood that in time ash willrebound and the invasive pests will be just another wood borer, irksome but in check.