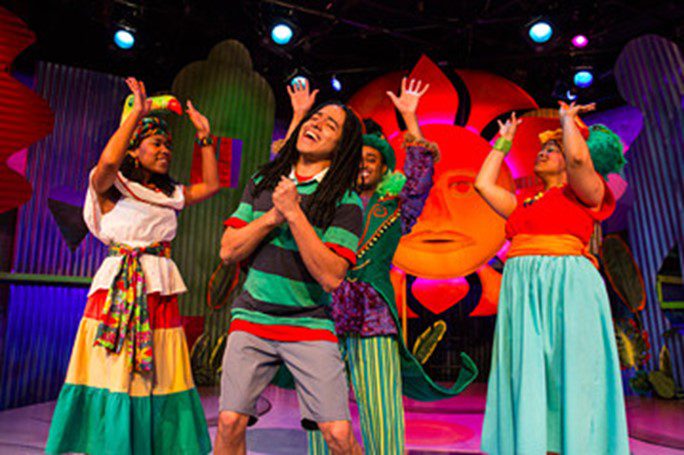 City Theater and the Adrienne Arsht Center for the Performing Arts of Miami-Dade County are proud to present Bob Marley’s Three Little Birds. This jammin’ musical featuring the timeless music and lyrics of Bob Marley is based on the children’s book (Every Little Thing) by his daughter Cedella Marley. Playing June 22-July 9 in the Arsht Center’s intimate Carnival Studio Theater, Bob Marley’s Three Little Birds features a live reggae band playing onstage and makes for an entertaining summer theater event for the whole family.

Bob Marley’s Three Little Birds is a tale of peace and love. Mama says “breathe easy,” but Ziggy’s afraid to leave the house. He’s too busy worrying about tropical storms, evil spirits and steering clear of that sneaky, hair-snatching Duppy! But with the help of Doctor Bird and his feathered friends, Ziggy’s reminded that “every little thing gonna be all right!”

“It’s an honor to see my father’s music connect with each new generation. My own children loved singing ‘Three Little Birds’ when they were little. It was like their own little mantra, and that’s what inspired me to write the book. Seeing this story come to life onstage illustrated by my father’s music gives it an added dimension. It’s positive, uplifting vibe is something the world needs more of, especially these days,” shares Cedella Marley.

Tickets to Bob Marley’s Three Little Birds and may be purchased at the Adrienne Arsht Center box office by calling (305) 949-6722, or online at arshtcenter.org.

Launched in 1996, City Theater is one of Miami’s oldest theater company. They are nationally distinguished for being the only theater in the country producing 10-minute plays and musicals year-round and for all ages.