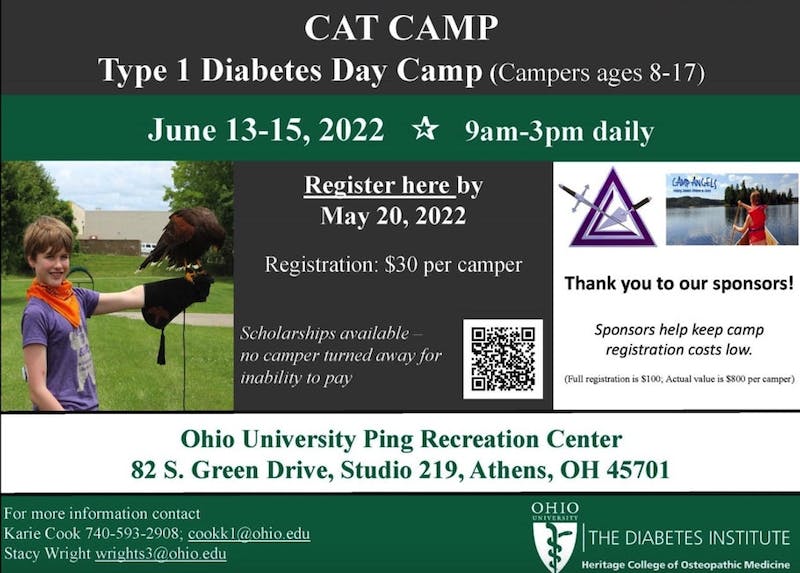 After the COVID-19 pandemic prevented various summer camps throughout Ohio, CAT Camp is finally back in Athens county this year from Jun. 13-15. Hosted at Ping Recreation Center, the camp is designed for children with Type 1 diabetes between the ages of 8 and 17.

“The main purpose and focus of camp is to encourage independence in diabetes management, encourage confidence and build confidence in the campers ability to manage their diabetes and to have fun along the way while we do all of those things,” Karie Cook, camp director for CAT Camp, said.

The camp combines real life situations with fun activities such as games, crafts and field trips to stimulate campers throughout the day, promoting wellness and a sense of normalcy. What differentiates CAT Camp from other summer camps is it’s actively inclusive space for children with Type 1 diabetes.

“Oftentimes, our camps might tell us that they’ve been to other camps, but they were the only kid with diabetes, which sometimes meant they had to sit out activities or couldn’t participate in the same way,” Cook said. “Whereas, with our camp, if someone has to step away for a minute it’s no big deal. It’s just part of what happens, and so everybody is on the same playing field and that feedback makes a big difference in their confidence too.”

Amber Healy, medical director for the camp, said CAT Camp also provides a sense of community for campers with Type 1.

“It gives them an opportunity to have fun in an environment where everybody else also has diabetes,” Healy said. “Less isolation and the feeling of being alone because a lot of kids don’t know someone else with Type 1 diabetes or know too many people with Type 1 diabetes, and this gives them an opportunity to meet other participants in the region with a similar disease process.”

Alyssa Walker, a former camper and an incoming camp counselor, also says this camp experience helps kids feel less alone, as loneliness is typically a common feeling amongst those with Type 1.

“I think (CAT Camp is) important so then they see other kids their age, or maybe older or younger, that are also Type 1,” Walker said. “When you’re first diagnosed, you get in this mindset of ‘I’m alone.’ It’s like that for a lot of kids because I was also like that. For them to see others that had the same experiences or hardships that they do, it helps them a lot, it definitely helped me. I think that’s good for them, and it allows them to make friends.”

Cook and Healy are both excited for this year’s camp, especially after hosting it virtually for the last two years.

“I’m excited to be able to interact with the campers this year because they didn’t really need someone there to help provide guidance with insulin dosing and other things that might come up throughout the day, first aid issues and so forth,” Healy said. “The last two years my capacity has been (hosting) a parent meeting at night, so I will be excited to see some of our returning campers and see how much they’ve grown in the last couple of years and have that in person experience again.”

Cook hints at new additions to CAT Camp this year, which aim to motivate campers to help out around the camp.

“This year, there’s something new we’re doing,” Cook said. “(Campers) get to earn CAT Cash throughout the course of camp, and we have a prize table that they can buy prizes on each day. They earn their CAT Cash by being helpful or trying something new.”

Looking ahead to CAT Camp, Walker is excited to interact with campers this year, as well as act as a role model for younger children with Type 1 diabetes.

“I’m very passionate about being some sort of support system or a role model for younger kids that are also Type 1,” Walker said. “I just want to be someone that kids can look at and just be like, ‘Oh, if they can do whatever they want to do, so can I.’ So it’s more just making sure they see that even though they do have diabetes that they’re still able to do whatever they put their heart to.”