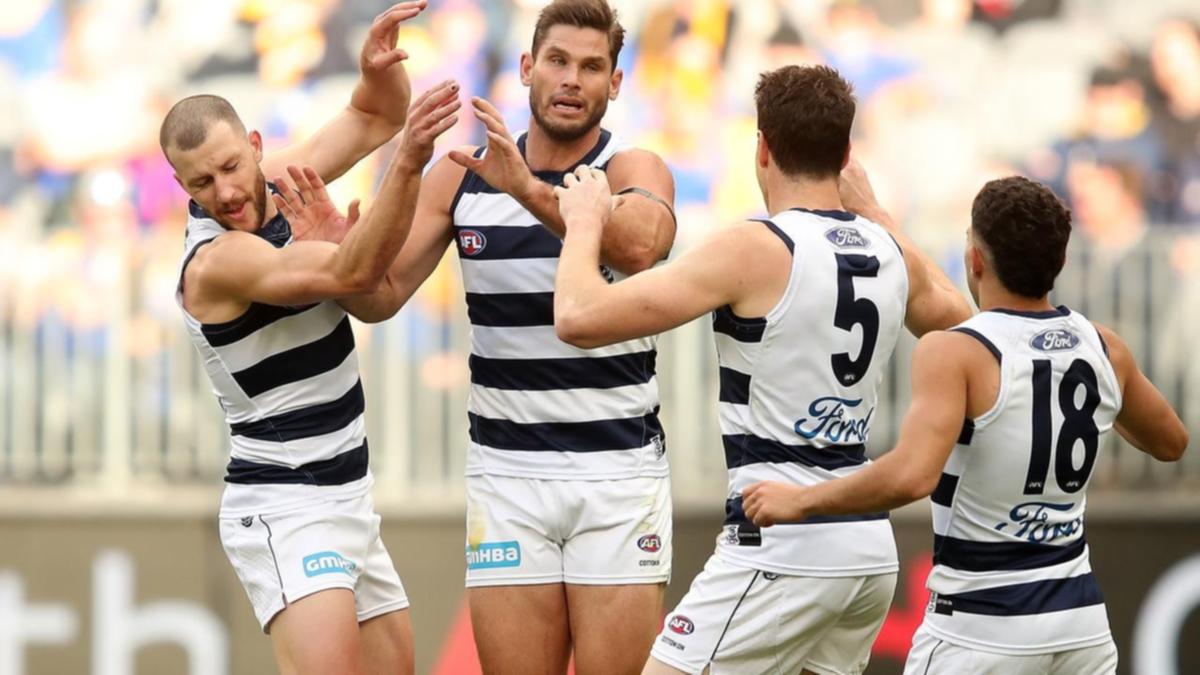 Geelong coach Chris Scott hopes Tom Hawkins can thrive into his mid-30s after the star forward kicked his 700th AFL goal in an 18-point win over West Coast.

The Cats were expected to stroll to victory against a bottom-of-the-table Eagles outfit that had registered just one win all year.

But buoyed by the return of premiership stars Elliot Yeo, Willie Rioli and Dom Sheed, West Coast hit the lead early in the third quarter.

Hawkins kicked goal No.700 in the second quarter when he won a lucky free kick, with the 33-year-old becoming just the 26th player to achieve the feat in VFL/AFL history.

The 33-year-old is out of contract at season’s end, but Scott said the spearhead is showing no signs of slowing down.

“I think it is possible,” Scott said of Hawkins playing for several more seasons.

“Our approach is to be open to that possibility and make sure our program reflects that.

“It has been assumed in the AFL world for a long time that if you start to get to the 30, you are not sore or a bit out of form, you’re old. We don’t subscribe to that.”

West Coast suffered a huge setback before the match when star player Tim Kelly was ruled out with illness.

They were dealt another blow 10 minutes into the second term when defender Jeremy McGovern suffered a game-ending rib injury after being bumped by Jeremy Cameron.

McGovern was sent to hospital for scans on what looks to be broken or fractured ribs.

“He’s had plenty of knocks over his time and he’s pretty brave. He plays hurt all the time. So for him not to get up, he’s pretty sore.

“A lot of guys play with broken or fractured ribs. He’s done it plenty of times before, but it looked like a pretty bad one.”

The result was West Coast’s ninth loss on the trot – a club record.

But they will be heartened by a much-improved effort.

West Coast spent the week celebrating the 30-year anniversary of their grand final triumph over Geelong in 1992, and the 2022 team fought hard until the end on Saturday.