A sous chef for most of his career, Freddy Rembert of Villa Park drew on his kitchen experience to create his unusual, award-winning invention, appearing now in local television commercials.

“I’ve been cooking forever and a day,” says Rembert, 72, who now works for Quest Food Management Services, a Lombard company that provides meals for businesses, conference centers and schools.

Those worlds collided one summer about a decade ago. Macie, the rescue German shepherd-pit bull mix he picked up from the West Suburban Humane Society in Downers Grove, was shedding, leaving fur all over the home Rembert shares with his wife, Debra. Drawing on his experience cooking in kitchens at Cracker Barrel and elsewhere, Rembert mused, “I wish they had hairnets for dogs.”

Conceding that “Doggy Hairnets” sounds as if it could be the title of a comedy skit on “Saturday Night Live,” Rembert saw the need and created a prototype full-body mesh suit for Macie. He slipped Macie’s paws through the opening, pulled it over her back and zipped it up without a hint of protest from the dog, who willingly wore it for hours.

“I took it off,” Rembert remembers. “Hmmm. Look at all this hair.”


On a day with temperatures nearing 100 degrees, Macie, a German shepherd-pit bull mix, has no problem slipping into a Doggy Hairnet, designed by owner Freddy Rembert. A sous chef from Villa Park, Rembert knows what it is like to wear a hairnet.
– John Starks | Staff Photographer

Convinced he was on to something, Rembert searched the internet before finding a manufacturer on Alibaba, the Chinese-based business-to-business wholesale platform, that made him 1,000 Doggy Hairnets in a variety of sizes to fit small, medium and large breeds – – from precious pugs to burly Bernese mountain dogs.


“I sold all those,” says Rembert. He continues working at Quest, and his wife works for Brookdale Senior Living. But the pandemic took the wind out of his hairnet sales, and Rembert shut down that business.

He wasn’t the only small-business owner or minority businessman to close up shop. Between February and April 2020, the number of Black-owned businesses declined by 41%, and businesses run by women, Hispanics and Asians also declined, to the National Bureau of Economic Research.

In an attempt to help those businesses, the telecommunications company Comcast hosts a contest called Comcast RISE, which stands for Representation, Investment, Strength and Empowerment. Rembert, who also has a nonprofit company called Just Love 1, which makes hoodies and donates proceeds to help feed kids in schools, entered his Doggy Hairnets in the contest and was named one of the winners of free local TV commercials for 90 days.

RAGE Agency, a digital marketing company in Westmont, created the television commercials for Doggy Hairnets. One shows a dog, in trouble for shedding on the bed, hopping onto a computer to order his Doggy Hairnet. The commercial ends with the pooch wearing his Doggy Hairnet and his happy master in her bathrobe together in bed, eating popcorn and watching a movie. 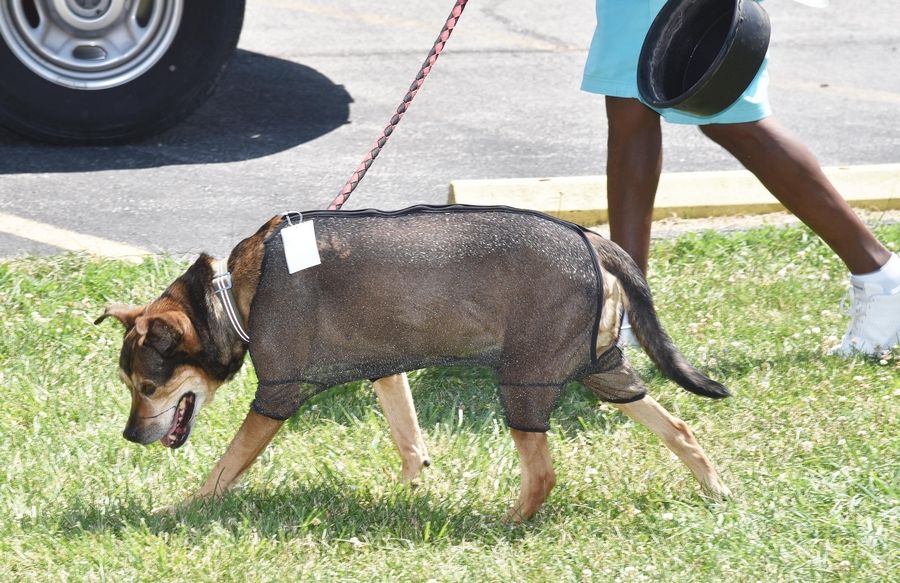 Getting the idea from his years as a chef, Freddy Rembert created his Doggy Hairnets to collect hair that dogs shed. His dog, Macie, “loves it,” Rembert says.
– John Starks | Staff Photographer

The nets, made of a lightweight, ventilated mesh, sell for $14.95 at doggyhairnets.com and come in two colors: the black Dark Knight and the Lady Rose, which is pink with white lace collars around the neck and paws.

“This has a purpose more than looking cute,” Rembert says. “I know there is a market.”

Macie wore the Dark Knight around Villa Roosevelt Park, in the York Center Park District, in temperatures hovering around 100 degrees while Rembert talked about how dogs don’t mind the mesh.

“She loves it,” Rembert says of Macie. “It also acts like a comfort blanket on days when it’s storming.”

Online reviews sometimes seem surprised that the product works and their dogs don’t mind wearing the net. One happy customer reached him by phone to thank him, Rembert says.

“She said, ‘You saved my marriage. My husband wanted me to get rid of the dog because he sheds so much,'” Rembert says, laughing. “Now they’re back to sleeping in the same bed.”

Rembert says he’s expecting orders to pick up in the summer heat. Because of his website, he’s sold the nets in 13 countries, he says. He’s hoping the TV commercials bring him more customers.

“I haven’t had to wear a hairnet the last 20 years, because…,” Rembert says, tipping his hat to reveal his shiny bald scalp. “I solved that problem.”