There is a good deal of interest among academics and nonacademics in comparing human animals with nonhuman animals (animals), with the main questions focusing on the similarities and differences between humans and other animals. While there are obvious differences in the size, shape, sensory systems, and locomotion between humans and nonhumans, many people focus more on intelligence, sentience and consciousness, and emotions, pondering questions such as

All too often, humans place themselves above and separate from other animals—arguing for human exceptionalism in this or that arena.1 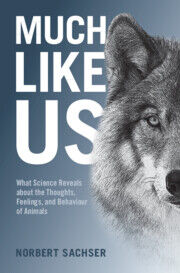 Science, including ethology, behavioral biology, and comparative psychology, and common sense have a lot to say about these topics and who’s smarter or more emotional. In his thoughtful book Much Like Us: What Science Reveals About the Thoughts, Feelings, and Behavior of AnimalsUniversity of Muenster behavioral biologist Professor Norbert Sachser reviews the literature and writes about these topics and much more.1

All in all comparative research shows that between-species comparisons are often fraught with error because individuals need to be able to do things that allow them to function as card-carrying members of their species. Clearly, there are many things, for example, that mice, rats, and various birds and mammals do that humans can’t, but this doesn’t have anything to do with who is smarter, dumber, or more or less emotional. Being called a birdbrain can actually be quite the compliment.

Ideas about the “ecological relevance” of many studies of comparative intelligence in captivity must also be factored into discussions of who’s smarter than whom because when animals are asked to do things that are unnatural in highly unnatural settings, they may be totally disinterested or bored, and just because they don’t do something does not mean they can’t.

In his outstanding book Ways of Being: Animals, Plants, Machines: The Search for a Planetary Intelligence, James Bridle stresses that humans aren’t the smartest among Earth’s diverse intelligences, and, in some tests of the presumed intelligence of nonhumans, they might not do what we ask them to do because of a lack of interest or motivation rather than because of any intellectual deficiency. Renowned primatologist Frans de Waal goes as far as to wonder if we’re smart enough to know how smart other animals are.

Sachser also weaves in a discussion about the practical implications of how we view other animals including their well-being. His book made me think and rethink how human’s views of other animals are far too often human-centric, to the detriment of how we perceive and treat other animals because they supposedly don’t really know what’s happening or don’t suffer like we do .

Many nonhuman animals are well aware of when they’re being mistreated and in pain. Even if they don’t suffer like we do, this does not mean they are not suffering. In fact, we clearly know numerous other animals do experience pain and suffer psychologically and physically, and that is why welfare regulations, regardless of how they lag behind what we really know about animal sentience, are constantly being evaluated and, in some cases, made more restrictive. Nonetheless, even with these so-called advances, countless nonhumans continue to suffer at the hands of humans.

Comparative data clearly show there are blurred borders between humans and countless other species. It’s important to keep in mind Charles Darwin’s ideas about evolutionary continuity in which the differences among species are argued to be differences in degree rather than in kind. All too often, human exceptionalism is overblown.

I hope Much Like Us finds its way into a wide array of courses at the undergraduate and graduate level including animal behavior and comparative psychology. It’s also readable by the general public who need to know what we’re actually learning through rigorous research about the thoughts, feelings, and emotions of other animals. I’m sure many people will be surprised by what we really know. Others, perhaps especially those who live with different companion animals, won’t be all that surprised, and many will wonder why we don’t use what we know on behalf of other animals.