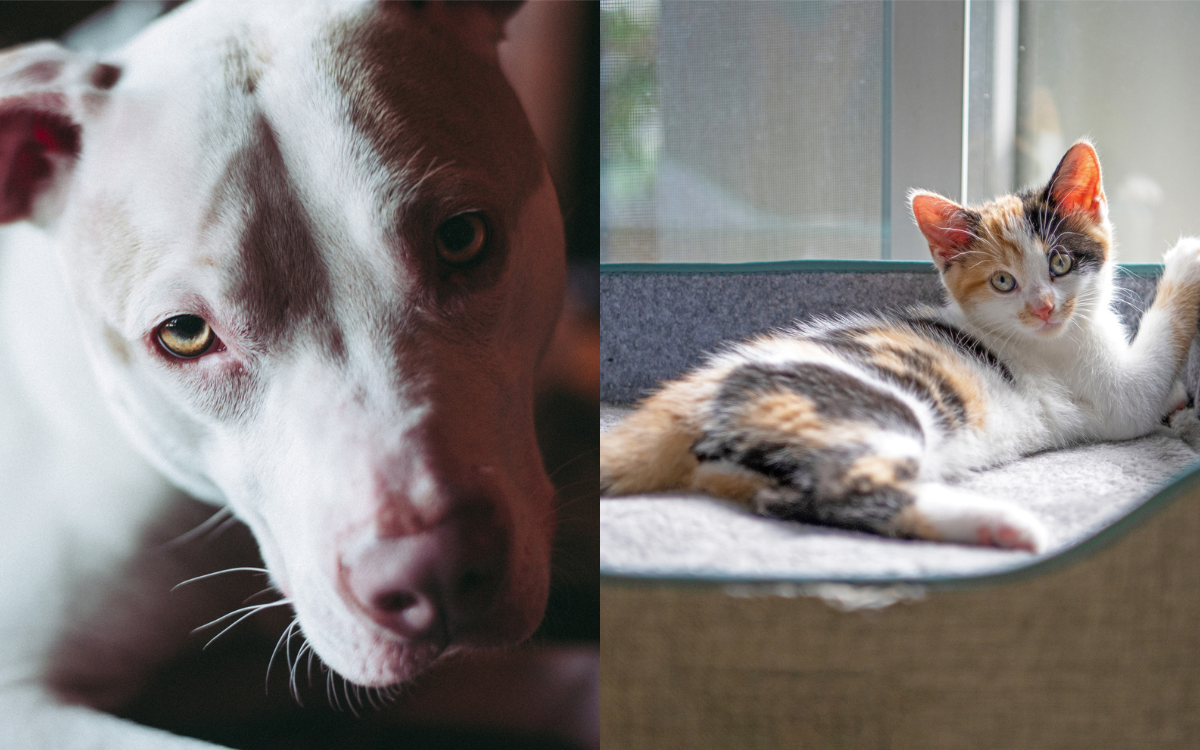 Footage of a pit bull’s crestfallen reaction at having to cram herself onto a tiny cushion while her owner’s cat spreads out across her giant doggy bed is proving popular among pet fans online.

A video of Zara the dog’s dejected response was posted to TikTok by zara_pitt. At the time of writing, the clip has been watched over 3 million times.

Research suggests dogs are smarter than cats, with one study conducted by neurologist Suzana Herculano-Houzel finding that canines, on average, possessed twice as many neurons—the basic information processing units found in the brain—as cats.

However, that doesn’t mean cats aren’t capable of outsmarting dogs every now and then. After all, a 2020 study by Eötvös Loránd University in Budapest, Hungary, actually found felines were more adept at solving puzzles than their canine pet rivals.

One cat who appears to have gained the upper hand on her pooch companion is rescue cat Amora, whose bold efforts were recently chronicled in a video shared online. The video can be watched here.

“When you want to sleep but your king-size bed is occupied,” the caption reads.

In the clip, her dog Zara can be seen sitting awkwardly on a cushion clearly not designed for a canine of her size and stature.

All the while she appears to be shooting dejected glances off in a particular direction. The camera duly pans across, following her gaze only to discover she is looking over longingly at what is clearly her bed and the cat occupying it.

Few could begrudge this feline a little relaxation though.

According to one of Zara’s owners, Amora the cat was found at just 3 months old, abandoned on a cold rainy day, three years ago.

Thankfully she was taken in by owner Gledi Triches, where she quickly developed a bond with Zara. “It was love at first sight,” Triches explained in one post. “The two loved each other and in a matter of minutes they were great friends.”

Best friends and partners in crime, it’s a good job Zara does appreciate her cat pal, otherwise Amora might have found herself turfed out of the bed at any moment.

Instead, Zara did the right thing, rising above it by letting her cat pal enjoy a much needed snooze and making do with the smaller cushion provided. Despite her best efforts though, Zara is unable to mask her disappointment at having to make do with a smaller bed while the cat stretches out in evident delight.

The hilarity of the situation and Zara’s amazing reaction was not lost on social media, with fans flocking to comment on the clip. “Oh my God how cute,” one viewer wrote while another concluded it was just a “cat being a cat.”

“You better buy another bed like this,” one fan suggested. “Poor Zara.” Another wrote: “The cat that runs the place” with a fifth applauding the fact Zara was at least “trying to fit in the cat’s bed.”