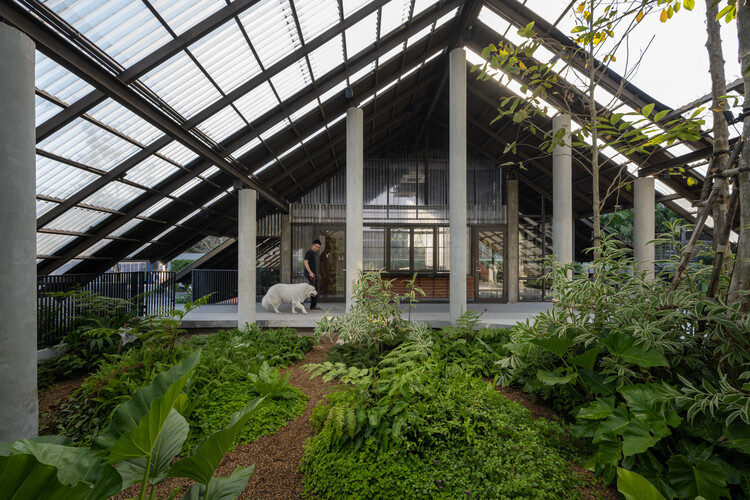 Text description provided by the architects. Being respectful to each other is, presently, the major issue of being a human, and so be the architecture. This house is built for a man who desperately loves dogs. In the beginning, he desired to build a place, not only for him to live, but it must be a place for his dogs to enjoy as much as they want. He also desires to share his happiness and his beloved dogs’ happiness with other dog lovers by accommodating a part of his dog’s house as a hotel where other dogs can share facilities and meet each other in the place, including dog care and salon corner to the back house, and also the waiting area in front of the project for the human who wants to see their beloved dog’s activities during the dog’s treatment program.

To reflect this attitude of the client, we started researching the context of the project to understand how the architecture will be configured. Nakhonpathom is the agricultural province known as the ‘national kitchen’ where pork, chicken, and rice in the market are exported, so we researched and found a lot of interesting architectural characters remaining from the past to the present day, ‘the roof’.

The word ‘Context’, for us, is not only used for the nearby building, existing trees, weather, geology, or any of the physical things we perceive through our senses but it is also included the abstract thing, the relationship of the users , ‘Dog and Human’. We also studied human and dog behavior to understand the relationship between them. What we found relatively between dogs, humans, and architecture is a simple thing called ‘Scale’.

‘Scale’ is the most significant difference perceived by both dogs and humans. Whenever we want to communicate with the dog, we need to a little bow ourselves to get closer to make them more confident and to reduce the distance between dog and human, physically and mentally. Lying, the architecture, human-made, is designed using the character of the local agricultural building which has a low roof design to match the scale of chicken and pig, but we used the roof element according to remind people of the existence of other lives. The roof indicates where people can walk, where they cannot, where they can see, where they can sit, where dogs can run, where dogs can lay down, or even where the trees can grow.

The column base is designed to fit the dog shape when they sleep and to be functionally used for easy cleaning. The steps of the swimming pool are also designed to suit not only human scale, but it is also suitable for the dog to step up from the pool properly. The roof is designed without the roof gutter to let the water touch the ground directly. All of the designs aim to live with each other, to make them closer, to make them grow together, and to make humans more respectful to the other lives matter on earth.