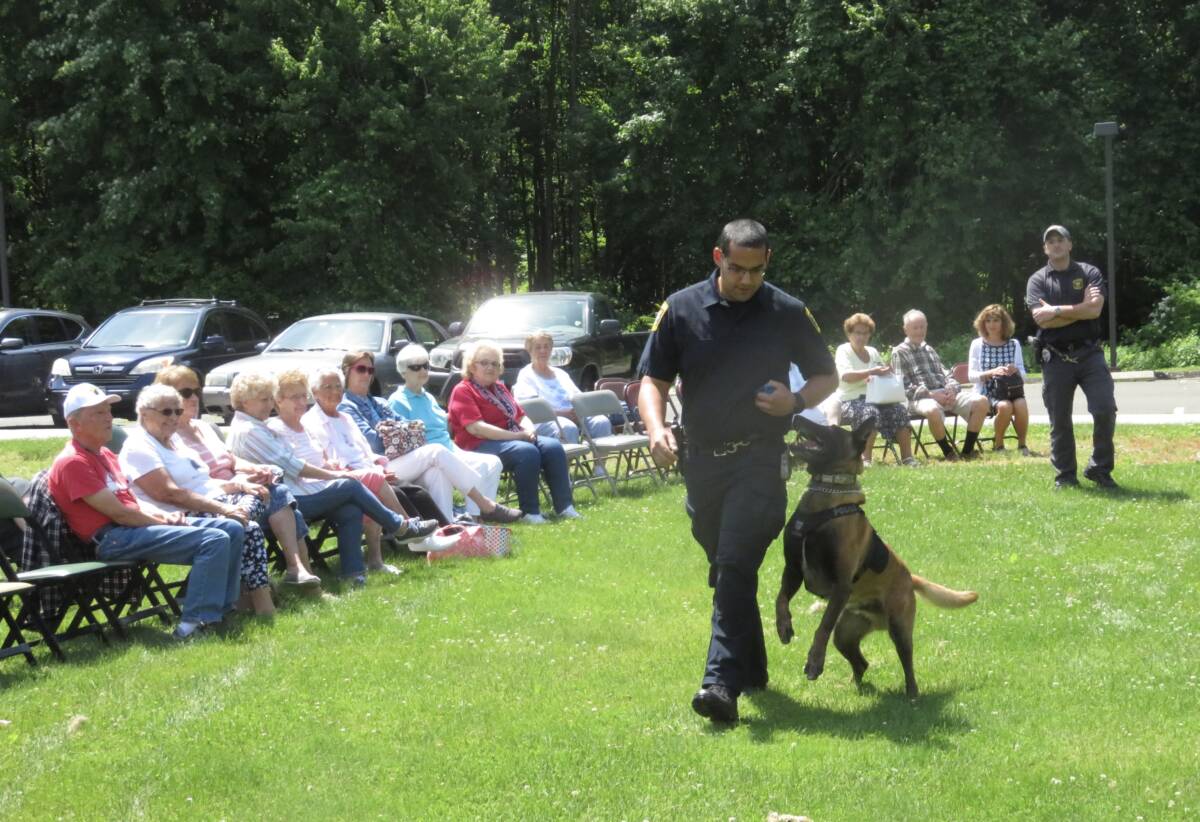 MONROE, CT — Monroe Senior Center patrons watched a police dog demonstration while sitting on folding chairs on the back lawn late Tuesday morning, before going back inside to enjoy hot dogs off the grill. 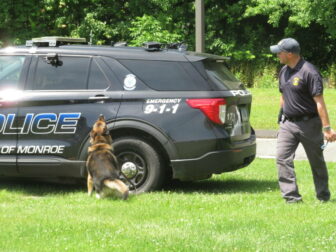 K-9 Murphy finds cocaine in the wheel well of a police SUV during a demonstration as his handler, Officer John McAulay looks on.

Police Officer Michael Panza donned the bite suit for demonstrations, when the dogs took turns chasing and taking him down to the ground.

The center also received a visit from Chief Keith White, Capt. Greg Smith and other officers.

Riggs, a seven-year-old Malamar dog born in the Czech Republic, participated in first demonstrations. He was Jeffrey Loomis’s dog, before Loomis was promoted to sergeant. Now the dog is DeCarli’s partner.

DeCarli showed how attentive Riggs is to him by walking past the row of seats as the dog walked closely by his side, looking up at him. At one point, McAulay pulled on Riggs’s tail without breaking the dog’s concentration. 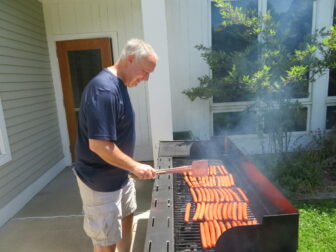 Hot dogs are prepared on the grill outside the Monroe Senior Center Tuesday.

He said food reward dogs can have toys all over the house, but if they want to eat, they have to do their job. “I think it’s a huge pain in the neck to do it that way,” McAulay said.

“Both of our dogs are trained to bite and apprehend criminals,” he said, adding Monroe’s canines can also use their noses to search for evidence and people, though not as well as bloodhounds.

“They can find drugs and clear buildings,” McAulay said of Monroe’s canines. “We can send a dog ahead of us.” 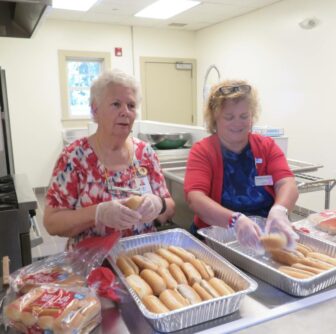 Hot dog buns are prepared inside the kitchen of the Monroe Senior Center Tuesday.

Both of Monroe’s police dogs are certified at detecting marijuana, though that drug is now legal, according to McAulay.

The officers hid cocaine in the wheel well of one of their SUVs and Riggs was ordered to search for it. The dog sniffed around the vehicle and quickly found it, sat and alerted his handler.

Though there are containers that hide the scent of drugs, McAulay said drug dealers still handle it with their hands, so the smell is there, just as someone cooking with garlic gets the scent on their fingers.

He said a really good indicator of the presence of drugs in a car is when the dog smells the vehicle door handles for a long time. 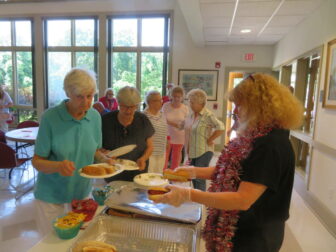 Lunch is served at the Monroe Senior Center Tuesday.

To describe dogs’ extraordinary sense of smell, McAulay said if stew is cooking on a stove, human’s smell it as a whole, while a dog will smell the beef, carrots and onions separately.

Sometimes a police dog can become fixed on the material of drug containers are commonly found in, such as a glass jar. At one time, McAulay said his dog Murphy was barking at headlights and anything made with glass.

Murphy is a German shepherd, who is almost nine.

One senior asked if Murphy and Riggs get along. “They love each other. They’re best buddies,” DeCarli said. 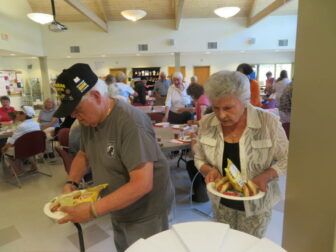 Hot dogs were on the menu for the Dog Days of Summer at the Monroe Senior Center Tuesday.

The dogs were trained by Lt. William Scribner of the North American Police Working Dog Association. DeCarli said he is now in North Carolina training TSA dogs for airports.

Before being brought to the US, McAulay said Riggs and Murphy were trained in Germany. “It’s easier for me to learn a few German commands,” he said.

McAulay said there are police dogs in other towns who follow commands in Italian and French.

A woman expressed concern over Murphy, who was still inside a police SUV on the hot morning. “Is the air conditioning on?” she asked.

McAulay brought Murphy out. “I was in the Army for a long period of time, serving in the 3rd Infantry Division in Iraq. He was named after Audie Murphy,” he added of the late soldier, actor, songwriter and rancher.

Murphy’s first task was to find a wallet and a set of keys in the grass.

“Did you give him the scent first?” one senior asked.

“No. He’s trained to detect anything that smells like people,” McAulay said.

The German shepherd found the items, receiving applause from the crowd and his ball toy.

Murphy also found the cocaine in the wheel well, barking and jumping around when he did. 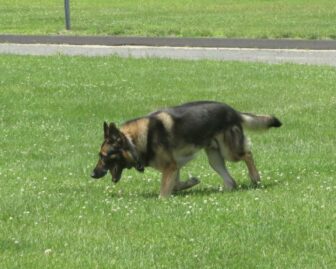 Monroe police K-9 Murphy searches for keys and a wallet on the lawn outside the Monroe Senior Center Tuesday.

McAulay shared the tragic story of a fatal crash in Redding. A teenager died and his St. Christopher medallion was lost. The family asked police to find it, but after a two-and-a-half-week search officers came up empty.

Redding officers asked McAulay to bring Murphy in to look, but McAulay said a human smell usually wears off after three days, and even faster when it rains.

However, Murphy went into bushes and dense prickers and found a soccer shin guard, a soccer cleat, the car’s head rest and the victim’s wallet within five minutes, before finding the sentimental piece of jewelry.

“It was cool to find that for his family,” McAulay said of the victim. 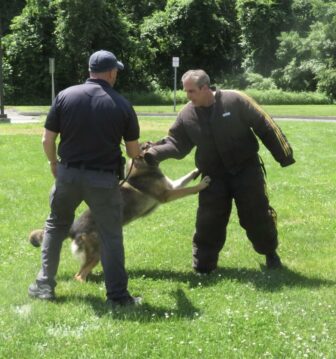 Panza walked onto the lawn in a bite suit for a demonstration.

“At a call, they don’t see good guys or bad guys — cops, robbers and victims,” McAulay said of the town’s police dogs. “They see me and everyone else. We teach other officers how to work with us.”

If McAulay gives a command for Murphy to get a suspect who runs away and another police officer instinctually chases the suspect, McAulay said his dog tackle might the officer.

“We train our dogs to bite everywhere,” McAulay said, explaining how a dog only trained with a bite sleeve may only pursue someone who is wearing one.

Monroe police train their dogs to focus on shoulders, legs and arms because those are areas of nonfatal bites, McAulay said.

Riggs and Murphy are equipped with bullet and stab proof vests valued at $5,000 each, according to McAulay. By contrast, he said police officers’ bullet proof vests cost around $1,000 each.

K-9 Officer John McAulay answers a question during a demonstration at the Monroe Senior Center Tuesday.

McAulay and DeCarli opened the event up to questions. One senior asked if the police SUV door can be opened remotely if officers need their dogs.

“We have a door popper if we need our dogs,” DeCarli said. “It’s a remote on our duty belts.”

A woman asked if the dogs act differently with other officers when they’re not wearing a bite suit. “We bring them into the building to get to know our staff,” DeCarli said. “They’re smart.”

Asked when it is time for a police dog to retire, McAulay said most dogs retire at eight-years-old and some retire when their handler is promoted. 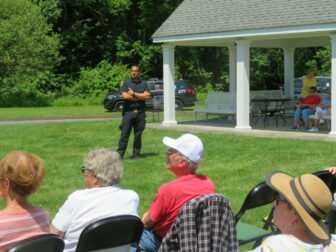 “Most dogs, when they realize they’re not working anymore, get depressed and literally die of depression,” McAulay said.

A man asked if the dogs are trained to lung at a gun or a knife if a suspect has a weapon in their hand.

McAulay said no, the dogs simply go for anything they can get ahold of.

As good as Murphy and Riggs are at tracking, Monroe police know when more help is needed.

About two weeks ago, a juvenile female was missing for 24 hours, according to McAulay. He knows a handler with a bloodhound and the dog was called in to help.

The dog led police officers into the woods, then into a swamp and onto a walking trail leading up a hill, where they found the girl — almost a mile from her home.

While Riggs and Murphy can detect the smell of humans, a bloodhound can sniff an article of clothing and track a specific human’s scent, McAulay explained.

“The girl was alive and safe,” he said.