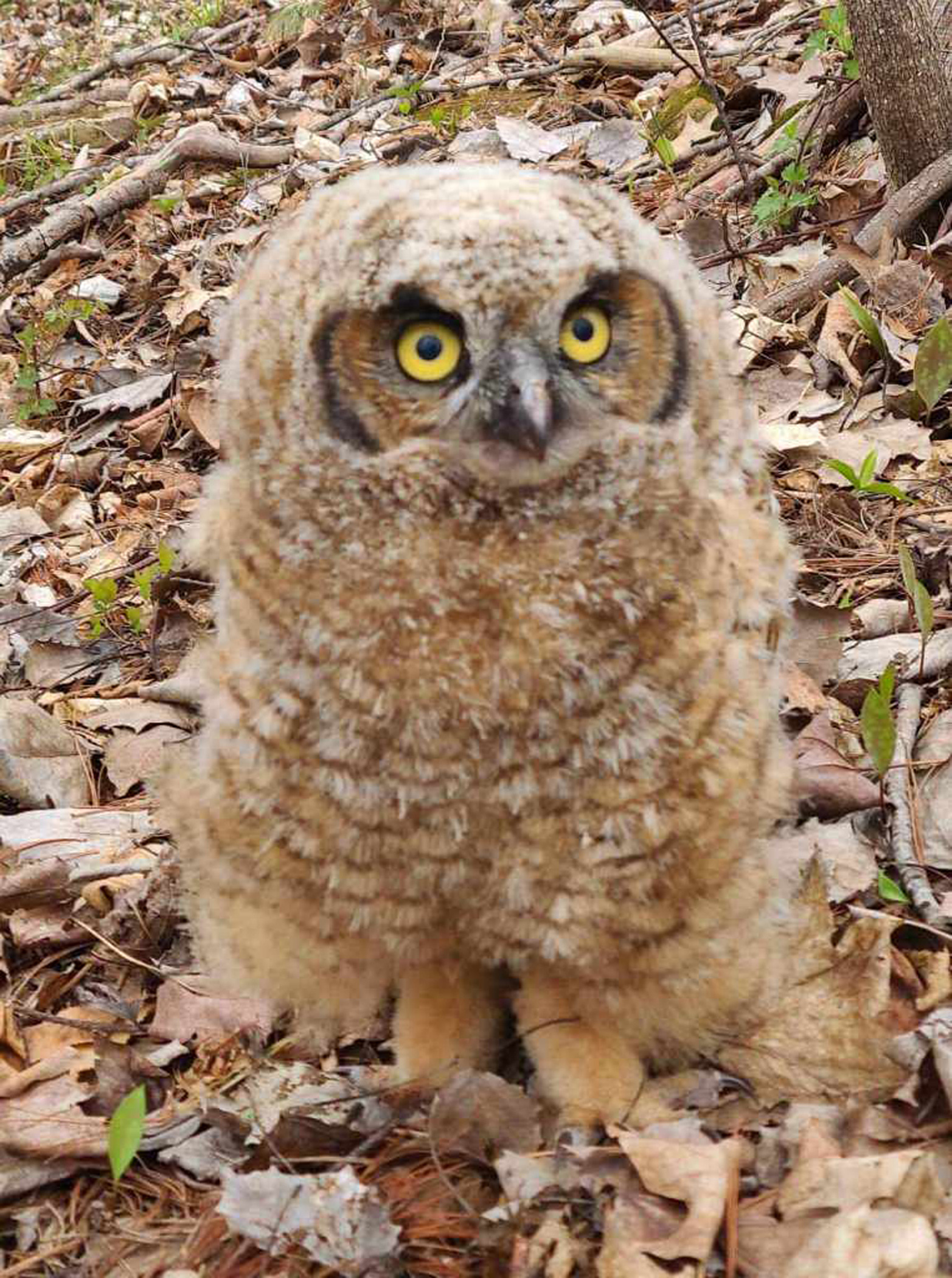 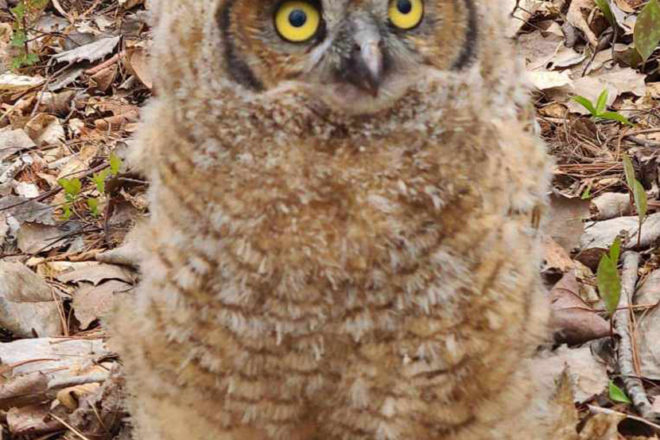 This fledgling great horned owl still has many fluffy, down-like feathers. Photo by Jeff Guillette. Used with his permission.

June is the month when most songbirds are mated and females are in their nests, incubating eggs. Males sing from trees nearby, encouraging their mates to be successful at hatching the eggs and remaining vigilant for predators.

During the 1970s, my late husband, Roy, and I used to conduct a breeding-bird survey for the federal government. The 24.5-mile route had specific road assignments, and the survey had to be done once a year between May 28 and July 7, and completed before 9 am. That tells me that June is the greatest songbird nesting month.

Large birds such as cranes, herons, hawks and owls nest earlier and take longer for the young to grow and become self-sufficient, mainly because of their size. The great horned owl may be incubating eggs by February, for instance, and they take 28-30 days to hatch, compared to the average 14 days for smaller songbirds.

Baby great horned owls are fully grown by about four weeks. They can fly well at 12 weeks old but do not have fully developed talons until almost six months of age, so they depend on their parents for food until nearly the end of summer.

Breeding birds are either precocial (pre-KO-shil) or altricial (al-TRISH-al). Many of the shorebirds and ducks are precocial, meaning that they incubate their eggs for a longer time, but once hatched, the young are up and running or swimming with the adults right away.

Smaller songbirds are altricial, meaning that they incubate their eggs for only about two weeks, and then the chicks spend about two weeks in the nest, growing feathers and being fed by the adults, before flying out to learn to fare for themselves. Even after leaving the nest, the adults help to feed the youngsters and teach them how to find the food that’s necessary for them to become independent.

Many of the smaller birds nest a second time if conditions are good. We’ve even had a few bluebird pairs that had three broods in one year. Bluebirds are in the thrush family, which includes the American robin. Many homeowners have robins nesting in their yards and see the youngsters with spotted breasts searching for food on the ground as summer progresses.

Nest sites for some species are holes in standing dead or dying trees. We encourage woodland owners to allow some of their dead trees to remain standing for use as possible woodpecker, nuthatch or chickadee nesting sites. In my woods, I have great crested flycatchers that use old woodpecker cavities 20-40 feet up in a deciduous tree.

Once in a great while, they may use a nest box instead. I remember cleaning a box in our field and finding a discarded snake skin in the box as part of the nest. We knew immediately that the box had been used by a great crested flycatcher because they are known to do this.

Protein is an important element in the food given to newly hatched birds to help them grow. It’s mainly found in insects and larvae, so it makes sense that summer is the time for nesting and raising young. Sometimes small reptiles such as tiny frogs or lizards also become a meal.

Many years ago, Roy and I were leading a nature tour in May. We were hiking down a woodland trail not far from Kangaroo Lake when we spotted a pair of sandhill cranes ahead of us with a young colt – their hatchling. The three of them were walking slowly, searching the ground for any small reptile that would be good food. We admired the beautiful, rusty-feathered youngster, then turned back so as to not disturb them.

Door County is a great place to study waterfowl and their varied nesting habitats. It seems unusual for a duck to nest high up in a tree, but several species do this regularly. Some friends in Ephraim called to tell of a common merganser nesting about 30 feet up in their maple tree.

The young hatched by mid-June and, one by one, jumped out of the nest hole. All but one survived the leap, and then the hen led them down the hill. A man helped them across Highway 42 by putting the eight chicks into a box and stopped traffic as he carried them to the water’s edge.

It’s amazing how these birds survive the great challenges to their lives. Let’s help them by not poisoning the environment with toxic sprays and chemicals that damage this fragile world we all occupy.