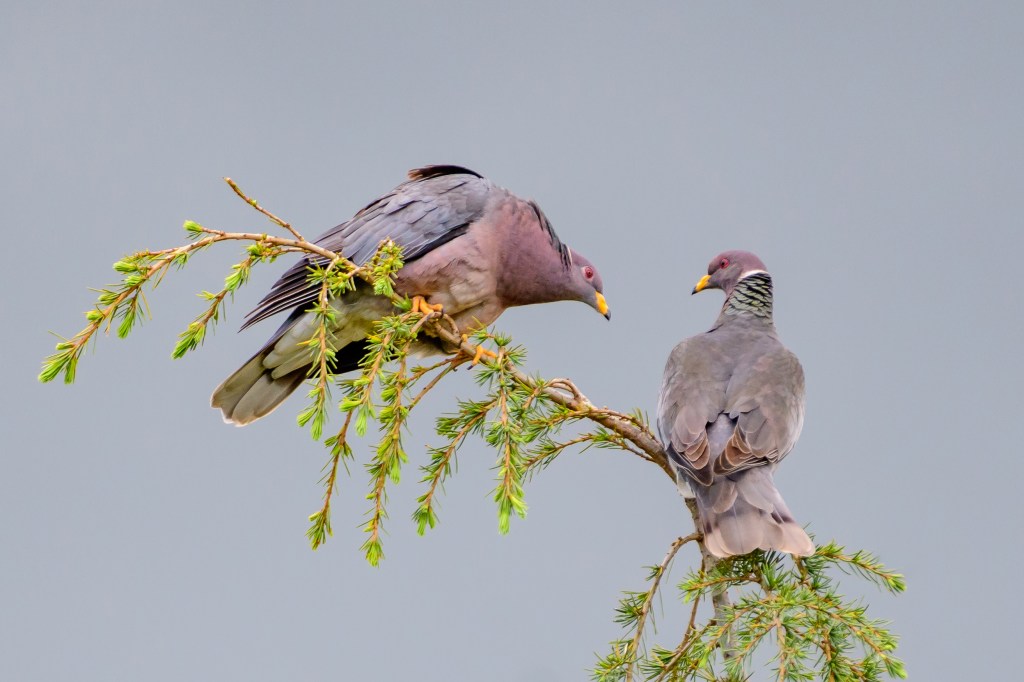 Here in Marin, we have four kinds of doves and pigeons. Really, these are all members of the same family — “dove” and “pigeon” are not strictly scientific words and are applied without any perfectly consistent pattern across the various species of the group.

Two of these birds are native species (the mourning dove and the band-tailed pigeon) while the other two (rock pigeon and Eurasian collared-dove) are striking examples of birds that have thrived in human-modified habitats. These are all birds that you should know.

The mourning dove is a widespread native species and the most frequently seen as a backyard bird. They are relatively small doves, and can also be distinguished by the dark spots on their wing and the absence of a prominent neck band. They have only a small dark smudge, rather than anything approaching a full collar. Their name derives from their melancholy song, a long, drawn out “coo-AHHHH-coo, coo, coo” given primarily in spring, especially by unpaired males.

Our second local dove is the Eurasian collared-dove, a large, light-colored dove with a dark neck band. (People often ask me about the “ring-necked dove” in their yard, usually thinking of this bird.) As its name suggests, this bird is not native to California and is in fact a fairly recent arrival. After being brought by ship to the Bahamas in the 1970s, collared-doves flew to Florida under their own power and have since spread across the country, reaching Marin in 2006.

Collared doves have grown distinctly more numerous over phe last decade and a half, especially in residential areas, though it has yet to become clear if they are having any significant ecological effects such as direct competition with mourning doves or other species.

An aside: all doves can be easily attracted to backyard feeding stations. In general, they are too large and clumsy to feed directly on hanging feeders that have short perches designed for small songbirds, but if your feeder has a large tray or platform, they will visit for a variety of seeds. Doves will also happily feed directly on the ground, either on what falls beneath a hanging feeder or on a handful of seed scattered for their express enjoyment. I recommend white millet for this purpose.

Species number three is the familiar city pigeon, officially known as the rock pigeon after its preferred nesting habitat in the wild. These days, of course, most rock pigeons do not nest on cliffs, but on ledges of buildings and other urban structures. Pigeons are variable in appearance, but most commonly have dark heads with iridescent patches on the neck, lighter gray bodies and frequently two dark gray bars on the wings.

Our last member of the family is the band-tailed pigeon, our native forest pigeon and the closest relative to the extinction passenger pigeon. Similarly to the Eurasian collared-dove, band-tails have a prominent neck band, but the colors are inverted. Band-tails are dark gray pigeons with a white collar, rather than being light, creamy doves with a dark collar. They can also be easily identified by their yellow feet and beaks.

Band-tailed pigeons are the most agile local member of this family, adapted to cling to branch tips feeding on acorns, madrone berries and similar foods. Because of the clumping but ephemeral nature of these food sources, band-tailed pigeons have a relatively nomadic lifestyle, spending much of the year traveling across the West in small flocks, feeding vigorously until a food source is exhausted, and then moving on. You might notice their sudden arrival in your yard for the same reason. They don’t follow a simple north-to-south migration between a consistent nesting territory and winter territory, but go they find adequate food.

Have you seen these birds? You’ve heard the name “morning dove,” but when was the last time you stopped to listen to that most melancholy voice?

Collared-doves probably weren’t here when you were born — did you notice that the birds of your world are changing?

Jack Gedney’s On the Wing runs every other Monday. He is a co-owner of Wild Birds Unlimited in Novato and author of “The Private Lives of Public Birds.” You can reach him at jack@natureinnovato.com.