Recently I have dove deep into three important team stats, and today I wanted to provide a Cumulative Adjusted Net Yards per Pass Attempt (ANY/A), Turnovers and Explosive Plays (TOX) and Adjusted Early Down (AED) Success Rates, or CATS for short. The goal for today is to look at Super Bowl Winners since 2000, seeing how they fared in each aspect separately, and ending with the new cumulative stat.

First, let’s look at ANY/A which is defined as (Passing Yards – Sack Yards + (20* Passing TD) – 45 * Interceptions)) / (Passing Attempted + Times Sacked). Using the differential for offenses and defenses, this is the most predictive individual stat in predicting Super Bowl Winners that I have found in my studies. Since I previously broke down such teams at the ANY/A link above, here is a different visual to see how teams ranked over time:

Viewing the 23 teams chronologically, we can see the stat favors the early end of the era. From 2000-2011 (the mean year), eight teams had above average ranks compared to only four since. The 2009 Steelers where one of the eight teams, landing at 10th thanks to a great defensive number of 3.2 that tied for second best but a 5.4 offensive result that tied for the fourth lowest, while the 2006 team landed just below the mean at 13th with a better 6.6 result on offense (14th) and allowing 4.7 on defense which tied for seventh best.

The strongest offensive result came from the 2017 Patriots (8.5), one of four teams with an above eight number (2020 Chiefs, 2000 Rams, and 2010 Saints), but ranked eighth in differential due to their defense allowing 5.8 which tied for second . The 2003 Buccaneers had the third ranked differential thanks to an elite result on defense of 2.3, with the 2014 Seahawks (top ranked differential) and 2009 Steelers tying for second at 3.2, allowing nearly a whole yard more!

The key thresholds for Super Bowl Champions are a defensive number less than six and a positive differential (offense – defense ANY/A) considering the only team to hoist the Lombardi trophy with a negative differential was the 2008 Giants.

Next let’s look at the TOX differentials which is Turnover and Explosive Play Differentials for offenses and defenses, viewing the numbers first since I’ve yet to provide it: 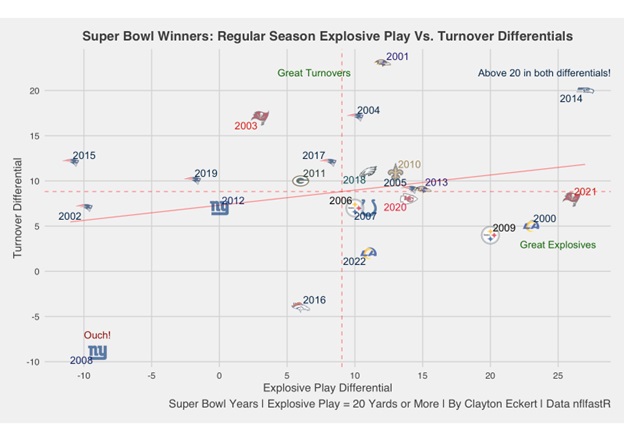 So, a positive turnover differential seems more predictive, as I’ve found in my prior studies, and considering the higher number of four champions having a negative explosive play differential.

Here’s a view with TOX differential ranks (Turnover Differential + Explosive Play Differential) of the above data to get a similar total view to the first graph: 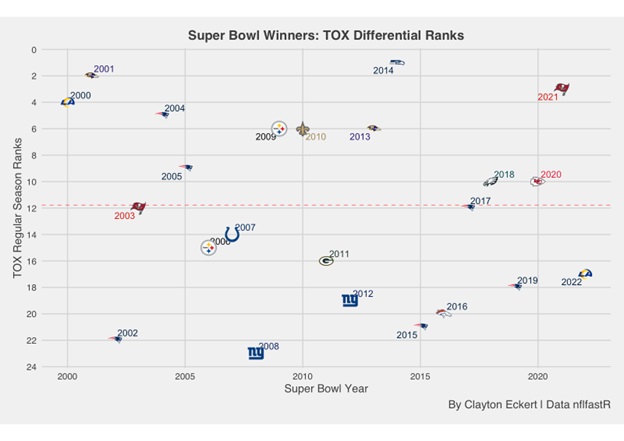 Overall, there was not as strong of a trend chronologically as one might expect. Looking at the offensive and defensive numbers separately though, there were more interesting and expected findings. Since 2010, no Super Bowl offender had had less than 52 explosive plays (2016 Broncos had the fewest), compared to six teams having less than 50 previously. Similarly, all but one team had 50 or less explosive plays allowed before 2010, compared to all but two teams (2014 Seahawks and 2016 Broncos) with 50 or more on defense since. This emphasizes the shift into a more pass happy league, with the era exceptions being the 2000 Rams on offense and the 2014 Seahawks on defense. 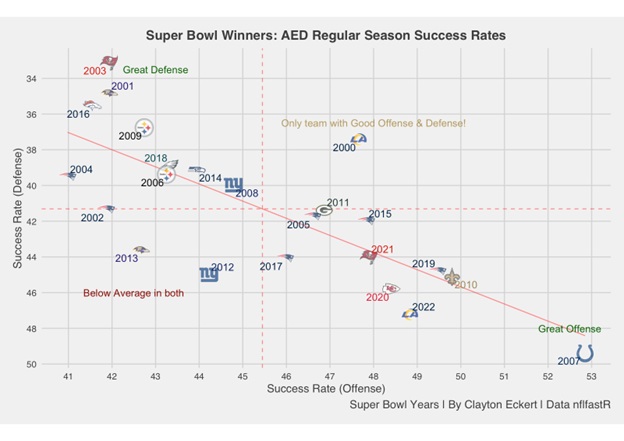 The 2000 Rams land alone on the top right of the graph with the best balanced results on both sides of the ball. Their offensive success rate of 47.65% ranked eighth along with a strong 37.42% success rate allowed on defense which is ranked fifth. The strongest success rate on offense was the 2007 Colts at 52.85%, which was impressively the only team above 50%. They also allowed the highest success rate on defense (49.41%) though, one example of the high correlation to the trendline (diagonal line) overall.

Here is a chronological rating view of the AED success rate differentials (offense – defense) as we saw with the other two data points: 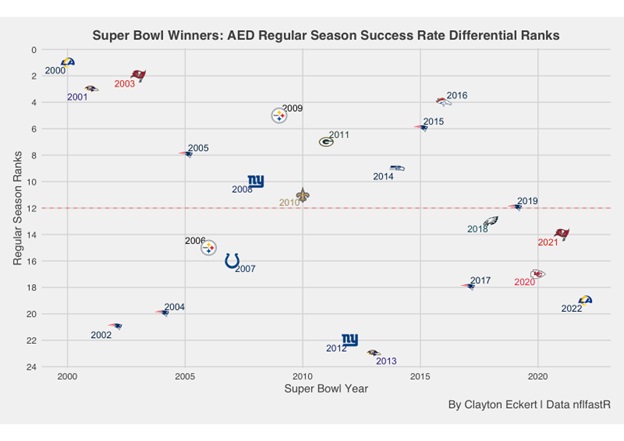 Now that we have seen the context of all the data, here’s a chronological graph of the new CATS results that factors the average rank of the three cumulative stats, with ANY/A ranks used as a tiebreaker since it was the highest predictor to winning the Super Bowl. I’ll also follow this up with a table to sum up all how each Super Bowl champion fared across the board to close: 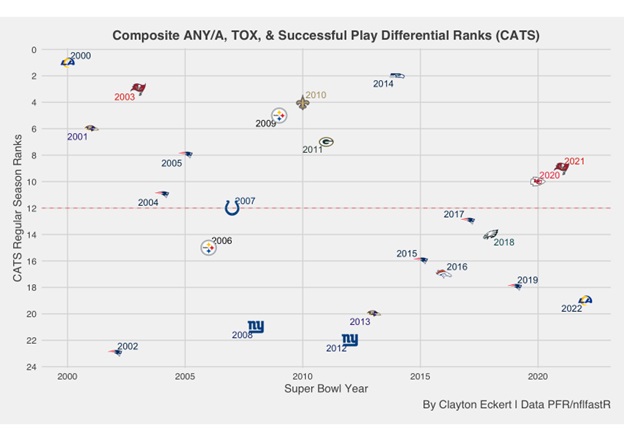 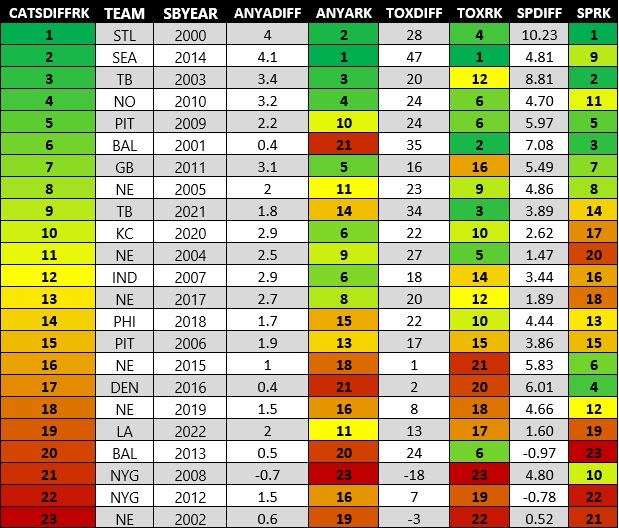