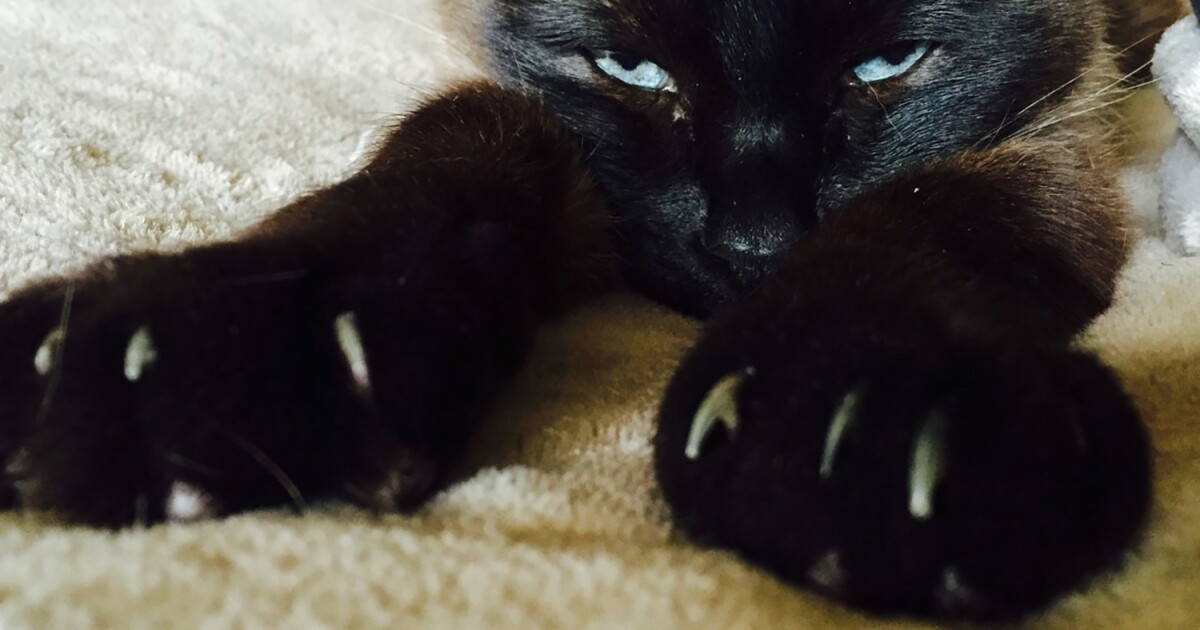 Cat scratch things. As any cat owner knows, all the world is definitely theirs for the scratching. Whether anchoring their claws into a rug for a good stretch or marking their territory by shredding the backside of an upholstered chair and a scent from the glands leaving in their paws, they are exercising a natural behavior. Similarly, when cats scratch people, they may be playing or warning them to back off.

At least half a century ago, declawing a cat became a convenient way to deal with a behavior unacceptable to the pet’s owner. But declawing a cat is not some kind of a permanent pedicure. It is an amputation of the last bone in each toe. The medically unnecessary procedure requires significant surgical anesthesia and post-operative medication, and can leave some cats with chronic pain, trouble walking, inflammation and other ailments, according to veterinarians, including Jennifer Conrad, the founder of a nonprofit called the Paw Project, who has been sounding the alarm about the cruelty of this procedure for two decades.

The California Legislature should pass Assembly Bill 2606, sponsored by the Paw Project, which would prohibit declaw surgery, or onychectomy, except in cases where it is necessary for the cat’s health.

Opposition has been building against this cruel procedure. It is already banned in eight California cities, including Los Angeles, Santa Monica, West Hollywood (the first city to ban it) and San Francisco. It is also outlawed in New York and Maryland and several dozen countries including Britain.

“It can cause severe problems for mobility, there can be pain, there can be residual bone fragments,” says Erik Olstad, a veterinarian and faculty member in the UC Davis School of Veterinary Medicine. The procedure, which he calls “messy” and “bloody,” is not taught at Davis, where it is strongly discouraged. Although Olstad would not do it in his practice, he is reluctant to support a ban.

Few veterinarians want to declaw today, and all the major veterinary organizations discourage it and insist that veterinarians educate cat owners in methods to avoid furniture scratching. The American Assn. of Feline Practitioners “strongly opposes” the procedure as a medically unnecessary one that carries the possibility of long-term complications and behavioral problems that may be worse than scratching. A cat with tender paws from the surgery may find cat litter too uncomfortable to tread on and stop using the litter pan.

Still, none of these organizations supports a blanket ban. The California Veterinary Medical Assn. argues that it would take clinical decision-making out of veterinarians’ hands and stop them from using declawing as a last resort if, for instance, an owner was on the verge of getting rid of a cat that wouldn’t stop scratching or was immunocompromised and feared a cat scratch could lead to a serious illness.

However, there are less-invasive methods to get cats to stop scratching: using scratching posts and pads, adhering double-sided sticky tape to furniture (cats hate touching sticky stuff), repellant sprays and vinyl nail caps applied with adhesive to cats’ claws . Many veterinarians and the American Assn. of Feline Practitioners point to guidance from the Centers for Disease Control and Prevention as well as to federal HIV/AIDS medical guidelines, which counsel HIV-positive individuals to avoid play with cats but “declawing is not advised rough.”

It’s time to outlaw this barbaric practice in California.