In a recent study posted to the bioRxiv* preprint server, researchers in the Netherlands assessed the indirect and direct severe acute respiratory syndrome coronavirus 2 (SARS-CoV-2) B.1.22 lineage transmission across domestic cats in an experimental environment.

In the current research, the investigators conducted an exhaustive study to describe the transmission of the SARS-CoV-2 B.1.22 lineage among cats, both via direct and indirect contact, in a more detailed manner. For that purpose, the team determined the transmission rate and decay parameters for the SARS-CoV-2 infectivity in the environment. They primarily measured the duration of SARS-CoV-2 infectiousness in a setting with contaminated surfaces.

The researchers conducted a transmission test in domestic cats following infection with SARS-CoV-2 to determine the likelihood of cats transmitting SARS-CoV-2 through a contaminated environment and offer additional proof of direct contact COVID-19 transmission.

Four separately housed cat pairs were used to evaluate direct COVID-19 transmission and contamination of the environment, ie, a pen, where two new naive cats per contaminated pen were placed after the pair of cats used to estimate direct transmission were removed. The sample size was estimated using information from the study of Gonzales et al.

Rectal and oral swabs were collected frequently, while oropharyngeal and nasal swabs were sampled only at a few time points. Heparinized blood and sera samples were obtained from all cats. Environmental samples (litter box, wall, floor, toy, and feeding tray) were taken day-to-day from all pens. Besides, the scientists assessed COVID-19 transmission by employing seroconversion or single-gene polymerase chain reaction (sgPCR) as indicators of successful infection. 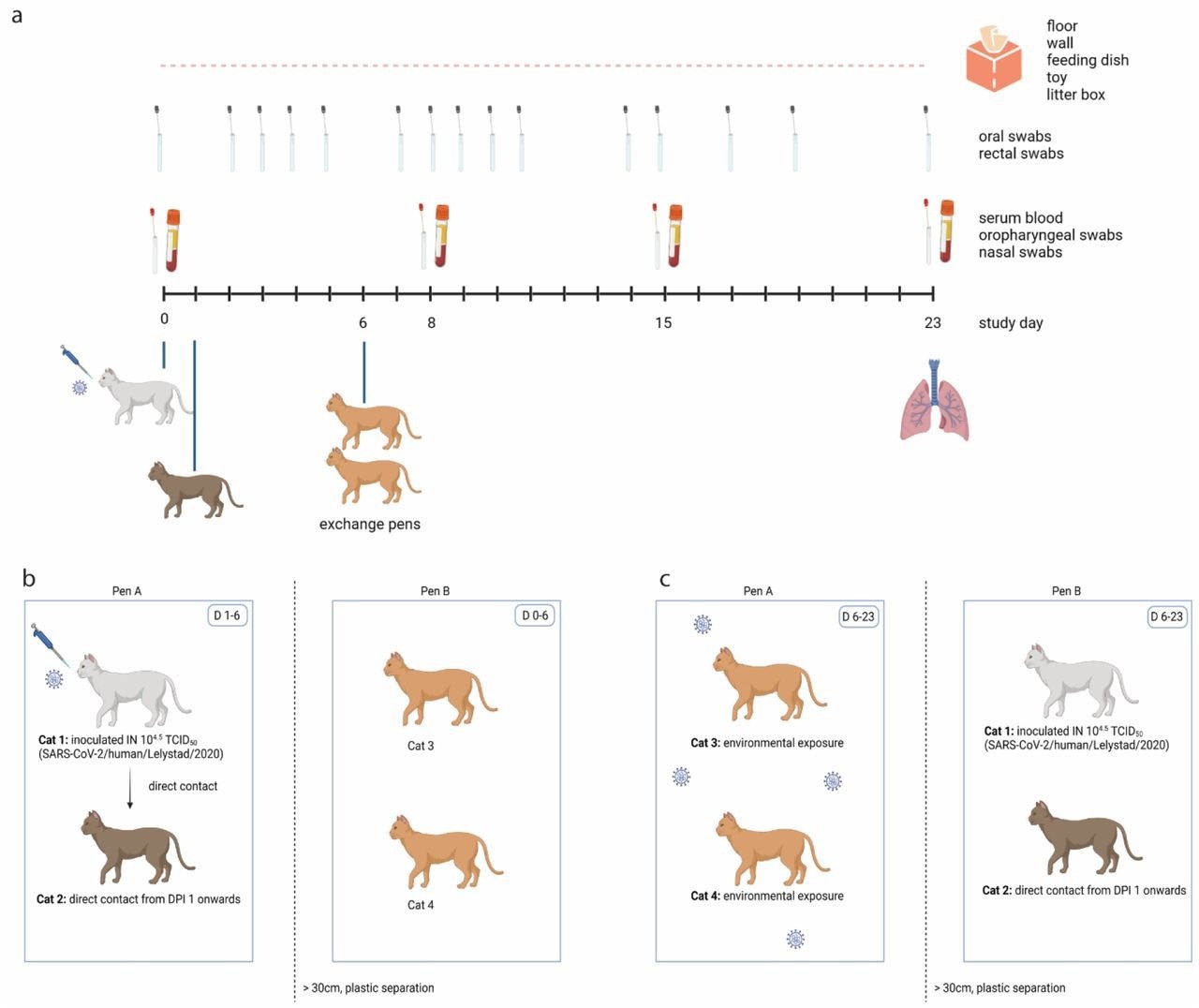 Experimental design of one out of four replicate groups. (a) Schematic timeline. One cat was inoculated intranasally on D0, and brought in contact with a naïve cat on D1 in pen A. On D6, these two cats were exchanged with two other naïve cats. Blood samples, oropharyngeal swabs and nasal swabs were collected under general anaesthesia on D0, D8, D15 and upon euthanasia. Oral and rectal swabs were collected more frequently without anesthesia. Environmental samples were collected daily, and all cats were euthanized on D23 except of one cat who died before the end of the study by a cause not related to SARS-CoV-2. (b) Until D6, cat 1 (inoculated donor cat) and cat 2 (direct contact recipient cat) were housed in pen A and contaminated the environment. Cat 3 and cat 4 were housed in pen B, which was separated from pen A by a plastic separator and space. (c) From D6 onwards, cats 3 and 4 were housed in contaminated pen A. Cats 1 and 2 were housed in pen B.

In addition, three of the four direct contact cats became infected, shed virus, and two among them became seroconverted. One of the eight cats subjected to an environment contaminated with SARS-CoV-2 contracted the virus yet did not seroconvert. 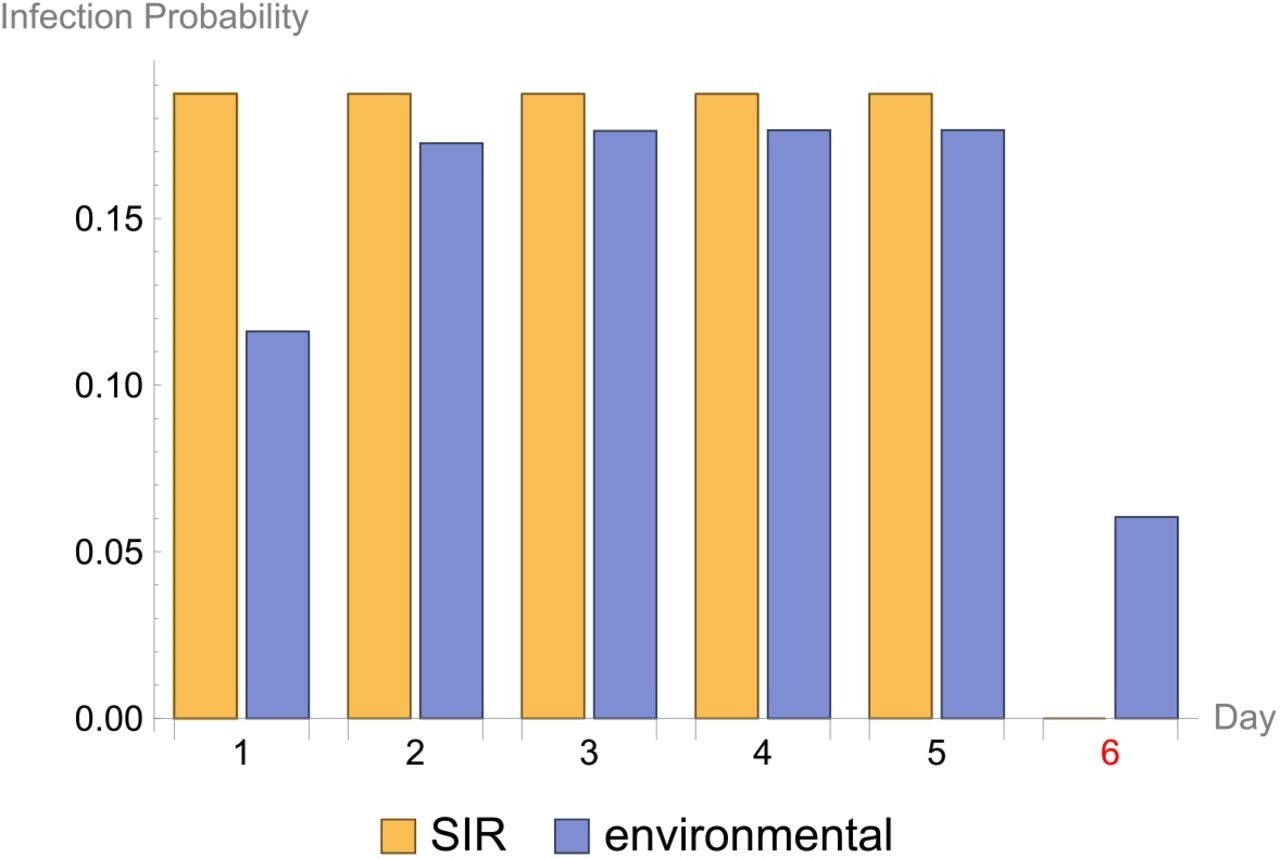 Infection probability. The infection probability for each observed interval in the experiment where the day of the start of the interval is given on the x-axis. The results for two fitted stochastic models are given: ‘SIR’ is the direct transmission SIR model and ‘environmental’ is the environmental transmission SIR model. Day 6 is highlighted in red, because this is the day when the inoculated cat was removed from pen A.

The team hypothesized that a lower dosage and intranasal exposure to SARS-CoV-2 would be an appropriate match for the donor cats’ natural infection. In addition, the lack of evident clinical indications combined with viral shedding detected in nasal, oral, rectal, and oropharyngeal swabs, mild nonspecific histological features, seroconversion of inoculated animals, and direct contact transmission to naive cats was all consistent with earlier reports.

Statistical evaluation of the transmission findings yielded 1) a reproduction number, R0 of 2.18, 2) a transmission rate parameter, β of 0.23 day-1, and 3) a virus decay rate parameter, μ of 2.73 day-1. The current data indicated that SARS-CoV-2 transmission among cats could be sustained with an R0 of more than one. On the other hand, the infectiousness of the contaminated environment deteriorates quickly, with a mean infectiousness duration of 1/2.73 days, or 8.8 hours. Further, the researchers explained that SARS-CoV-2 infections of cats cannot be ruled out if exposure to a SARS-CoV-2-contaminated setting occurred soon after contamination.

The research concluded that direct contact transmission of SARS-CoV-2 between cats is feasible even when the inoculation dose is low. Additionally, the current work depicts that the infectiousness of a SARS-CoV-2-contaminated environment quickly degrades, reducing the effectiveness of environmental COVID-19 transmission. The indirect, environmental transmission pathway, however, may still be viable. In addition, the present data showed that surveys that focus only on seroprevalence in cats might overlook the exact prevalence of SARS-CoV-2 among cats.

bioRxiv publishes preliminary scientific reports that are not peer-reviewed and, therefore, should not be regarded as conclusive, guide clinical practice/health-related behavior, or treated as established information.