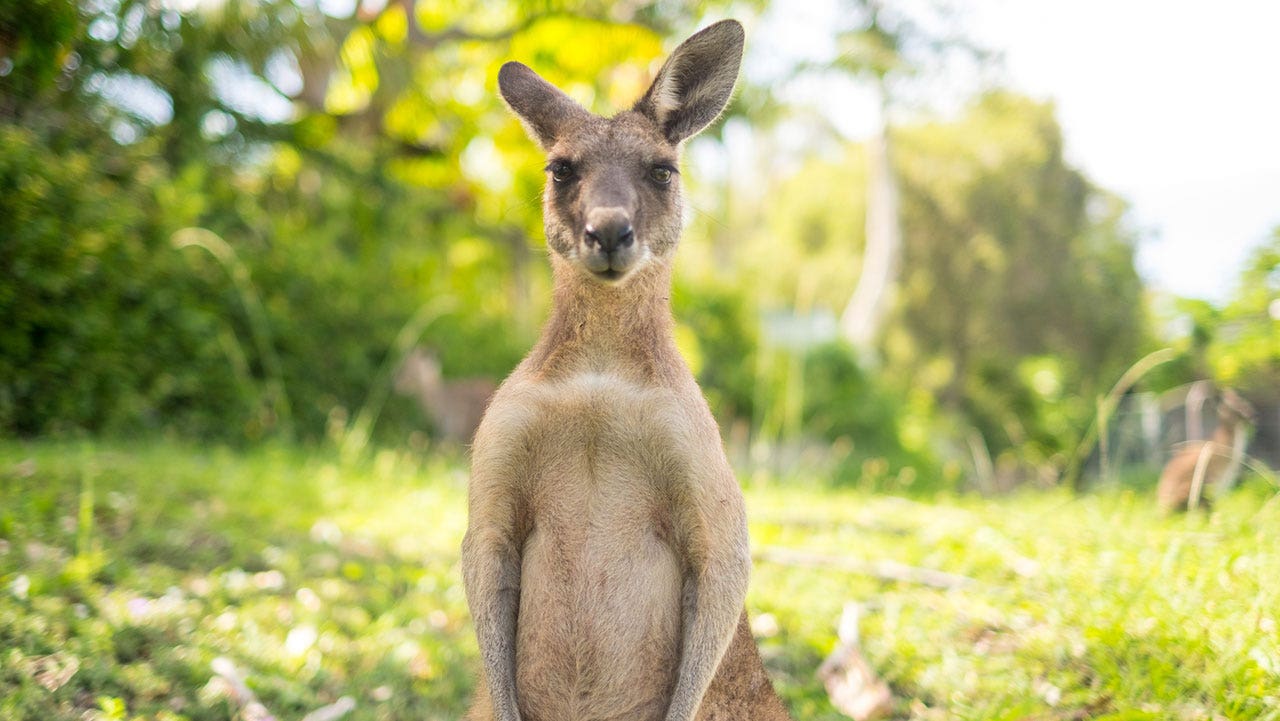 Kangaroos are known to box with each other — but it’s rare to see a human and a kangaroo actually duke it out.

Yet that’s exactly what happened for more than six minutes in Argyle, Australia, recently, when a kangaroo began going after a man’s dogs in his yard.

The man — a father and grandfather — reportedly described the animal as a “six-foot mad roo.”

The kangaroo went after the man, as Tucker Carlson noted in his “Final Exam” segment on “Tucker Carlson Tonight” on Friday, June 3.

In the video at the top of this article, as well as in the tweet below, you can see exactly what happened.

At one point, still trying to fend off the kangaroo, the man grabbed a stick — but the kangaroo kept coming at him.

Meanwhile, the man’s dogs were barking wildly but couldn’t come to his aid because they were behind a fence in the yard.

The man is shown at one point wrestling the animal to the ground to try to subdue it.

The kangaroo was “in an aggressive mood,” the man said.

In an interview with an Australian television station, the man, Cliff Dess, said he has bruises on his body.

He said his dogs were barking in the yard — and that he went out to see what was going on.

He said the kangaroo was “in an aggressive mood.”

A kangaroo is shown here. A man in Australia recently fought one off with a stick — and then had to wrestle to the ground.
(iStock)

Dess said he tried shooing the animal away, but that didn’t work, as the animal put up its claws and began chasing him.

So, ultimately, “I fought it off with a stick,” the man said.

He said he “took it to the ground,” as that was “the only way I could deal with it,” he told 9 News Australia in an interview.

He said the aggressive animal “gouged me on the top of the head” and bit his finger as they wrestled on the ground.

Finally, after several more minutes, the man said he got off the animal — and yet it still chased him around the yard.

Dess indicated he didn’t have anything against the animal or kangaroos in general.

But neither did he want such a creature threatening his dogs.

“Sometimes kangaroos move into backyards or onto private property to feed.”

The Queensland government website reports that kangaroos acccustomed to being fed by humans can become aggressive.

If they get into the habit of expecting food — and there isn’t any — then they can become agitated.

The site also says, “Even if it is only looking for food or human contact, a kangaroo may still become aggressive. Don’t act aggressively toward the kangaroo, as this will simply reinforce the idea that you are a threat.”

“Sometimes kangaroos move into backyards or onto private property to feed,” it adds.

“Stop this by fencing and removing sources of food or water that attract kangaroos.”

The site notes as well, “Kangaroos are one of Australia’s most recognizable animals. Australia has 4 kangaroo species — red, eastern grey, western gray and antilopine. The eastern gray is the most common species in Queensland.”

To learn more, watch the video at the top of this article, or click here to access it.

Maureen Mackey is managing editor of lifestyle for Fox News Digital. Story tips can be sent on Twitter at @maurmack.