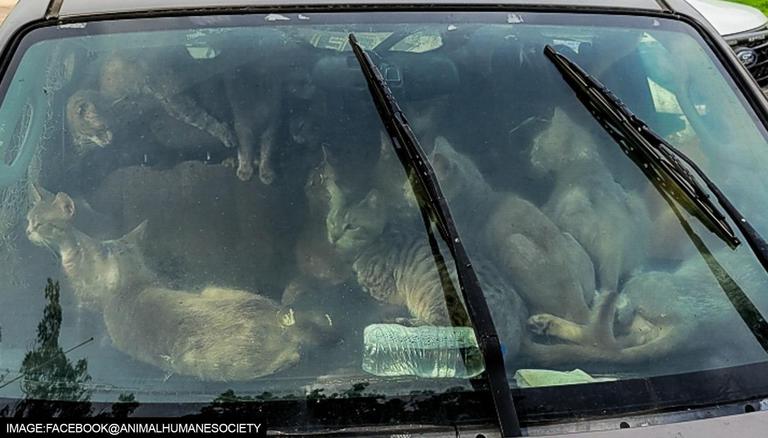 In a bizarre sequence of incidents, a shocking photo is going viral on social media. The viral photo shows 47 cats packed in a parked car in the rest area in the USA’s Minnesota amid scorching heat. After the photo emerged on the internet and went viral, it became a talking point, and the cats were rescued by the Animal Humane Society (AHS).

As per the Facebook post, according to the Animal Humane Society (AHS), the cats were living with a man who recently became homeless and didn’t want to leave the animals behind. The agency said in a Facebook post that the man later agreed to take their help as temperatures in Minnesota in the US reached above 32 degrees Celsius.

“Sweltering June heat and humidity. No home, no air conditioning. Living inside your car alongside your cats and unsure where to turn. This was the reality a community member faced yesterday when a police officer was concerned knocked on their car window,” AHS said in the Facebook post.

Further, the Animal Humane Society on Facebook shared the photo of the cats in the car – ranging in age from less than a year to more than 12. It also said that the homeless owner of the cats was assessed on the scene by paramedics and provided with medical resources. As per the Facebook post, the agency helped in removing 47 cats from the van, provided them with much-needed care, and took possession of the animals.

Moreover, the cats will be tested for illnesses and vaccination and will be de-wormed, spayed, and neutered before being put up for adoption. “Despite the extreme heat and relatively unsanitary living conditions, the cats are in good health – though most are dehydrated and a little untrusting of our helping hands. It will take days, if not weeks, to provide the ongoing care each animal needs,” the agency further said in the post.

The post has accumulated around 3.5K reactions accompanied by several comments. The viral post has prompted many to express their views. “Thank you for helping the cats and their human with kindness,” a user said. A second user wrote, “I am happy for the cats and hope the human is also getting the help they need”. A third user expressed, “So glad this was addressed. Thank you to those other rescue individuals that worked hard on obtaining some of them & dealing with this on their own for the past month trying to get these poor cats to safety.”