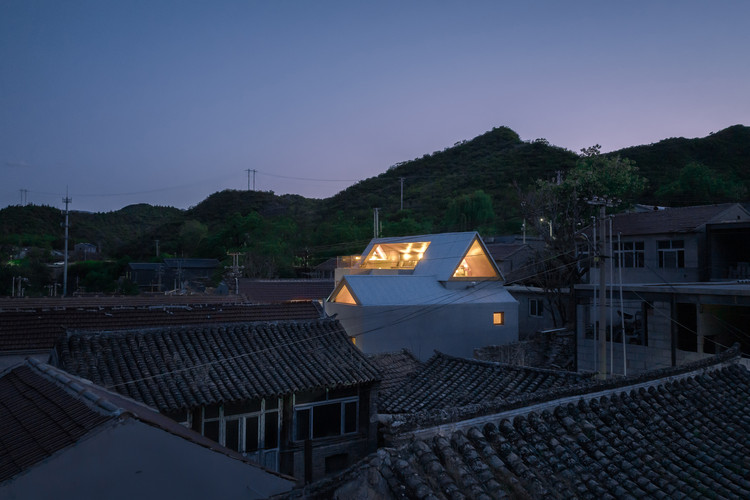 Text description provided by the architects. The site of this project is located in the western mountainous area near Beijing city, occupying a low-lying site within a mountain village, roughly 100 square meters in size. The original spatial condition was crowded and chaotic, and although people lived within the wilderness of the mountains, they could hardly feel the beauty of their surroundings.

The client was once a guest at “House of Steps” (a previous project which we completed and published in 2020). During our first meeting, the client displayed a true love for the open views provided by “House of Steps”, and communicated that they wished to have a similar terrace at a high vantage point that would provide excellent views.

Within this small, crowded site, our assignment was to build a vacation home that provided access to and experience of the mountains. This included three en-suite bedrooms and a series of functional public spaces with fine scale. Placing a 165 square meter building onto a site of just 100 square metres, the question of how to deal with the conflict between large volume and small site is the premise of our experiment in “coherence”.

The towering volume on the west side is tilted back, thus preventing people from feeling uncomfortable with the large volumes existing on such a small site. The grand slope is then merged with a slope on the opposite side. When looking toward the northern façade, a triangle appears on top of the original volume. Simultaneously, the sloped roof of the northern building extends toward the west and enters the interior. Under the slope, various public areas with multiple heights are combined together to form one cohesive space. On the slope, the space is occupied by a series of terraces, which function as beds at differing elevations. Essentially, the slope becomes the boundary between public and private. Compared to a stable horizontal surface, a slope conveys dynamism and movement. Within this process, the body, action, light, and the flow of wind are all also shaped.

Though the horizontal space is limited, the vertical space above and below the slope is rich and diverse. Two steep staircases link the space at differing heights. A spiral staircase links the first floor with the roof terrace, while the bedrooms on the first floor and second floor are linked together by one another.

Aside from the slopes and staggered floor between the roof terrace and yard, another characteristic of the project is the sense of scale that pushes limits. The most typical space is the bedrooms on the second floor. Space was too limited to place the sink in the bathroom, so we instead installed a countertop between the bedroom and staircase, blurring the boundaries between the two. The width of the sliding door becomes unequal at the top and bottom, and when the door is closed, the unevenly shaped door bites into the countertop, separating inside and outside.