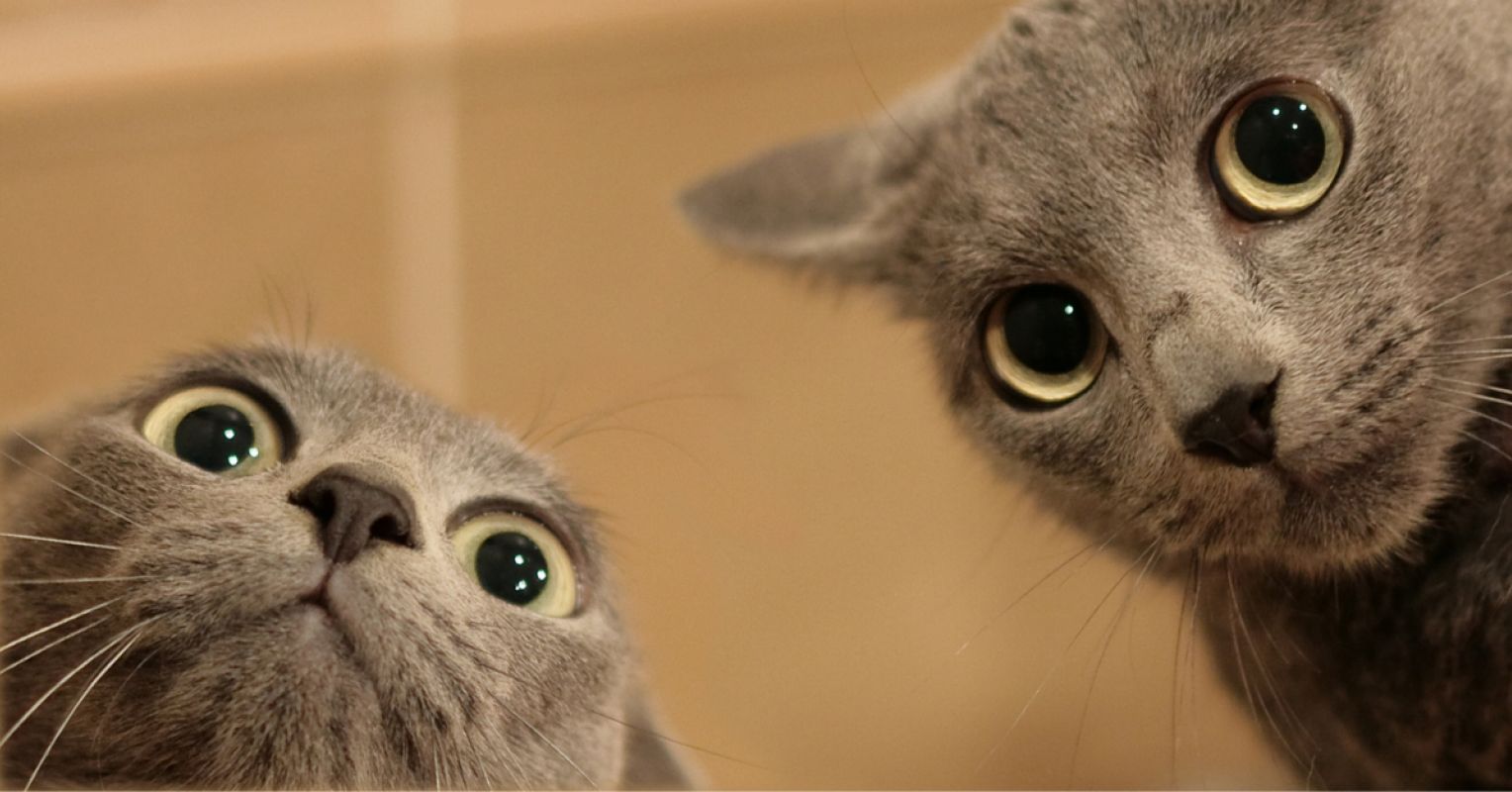 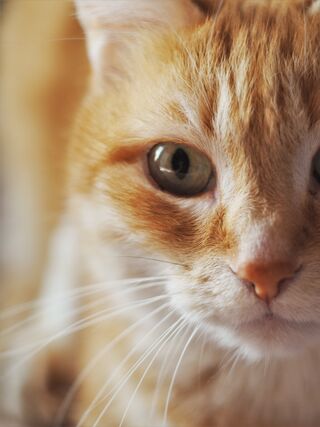 For millennia, we humans have invited cats into our homes. Yet cats remain mysterious, and their behavior often strikes us as delightfully mystifying (see: cat videos). We can gain some perspective on cats if we consider the sensory world they inhabit, and how they evolved to have the particular sensory abilities they possess.

It turns out that humans and cats share remarkable similarities in key aspects of how we see, despite our evolutionary differences.

How Evolution Shaped Vision in Cats and Humans

The last common ancestor of humans and cats was a mammal that lived over 90 million years ago. One set of descendants of this mammal branched into rodents and primates, eventually giving rise to us. The other branch led to cats, as well as whales, pigs, horses, and bats. For one thing, this means we humans are more closely related to mice than we are to cats.

Our last shared ancestor with cats probably had a simpler and less powerful visual system than either humans or cats do today. But over time, both our lineage and the cat lineage became adapted to particular ways of life that required sharp vision and our visual systems became more sophisticated.

For us and other primates, it seems to have been living in trees that sculpted our visual system. The canopy is an excellent place to avoid predators, but one false step could mean doom and—more importantly for evolution—no more copies of your genes. So our visual system, with its highly mobile eyes, is especially good at helping us evaluate, plan, and imagine in a complex 3-D environment. This strategy helped us find fruits and other foods in trees while mitigating the risk of falling. 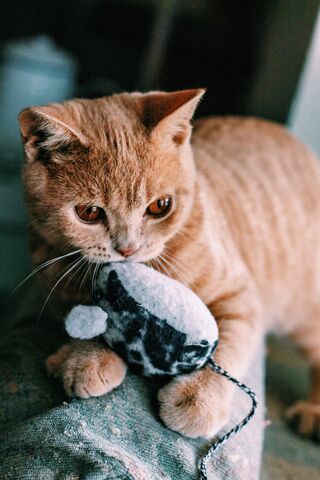 The cat’s visual system was shaped by their hunting lifestyle. Cats are so fully built around hunting that most of their brain can be cut off and they can still pounce. More specifically, if the forebrain is surgically disconnected from the rest of the brain, a small zap of electricity delivered to the intact brainstem will cause the animal to produce a fully-coordinated pounce attack.

To catch a wily prey animal like a mouse, the pounce has to be precisely directed and timed. This is where vision comes in. To know where to pounce, a cat needs to know how far to leap. Since each eye captures only a flat, 2-D picture of the world, stereo vision is needed to infer depth information from the visual scene. The view from the two eyes is somewhat different, which allows the brain to judge the distance from our eyes to a nearby object accurately. How stereo vision in mammals is achieved—how the brain makes the requisite calculations—is not fully understood. But one key feature seems to be comparing information originating from a given location in space using the two eyes.

Stereo Vision in the Brain

Imagine a cat sees a mouse on the ground ahead of it. The image of the mouse is projected into both eyes, and lands on the two retinas. A neuron in each eye captures light from, say, the top of the mouse’s head. The two neurons then need to deliver this information to brain maps of the visual scene so that the two images can be compared for small differences. This happens in the visual cortex, at the back of the head, which receives information from the two eyes.

The challenge is that neurons in the visual cortex are built into sheets, with individual cells packed together like blades of grass in dense turf. Neurons receiving information from the two eyes can’t be stacked on top of one another. This would be like stacking one patch of turf on top of another. Instead, the brain intersperses neurons receiving information from the two eyes, as if we carefully inserted individual plants from one patch of turf into the corresponding location in the other turf patch.

In the cat brain, this evolution strategy shows up as a pattern where inputs from the two eyes are intermingled in swirly patches, somewhat like a fingerprint. The fingerprint pattern makes it easy for the brain to compare how a given location in the world looks from the vantage point of both eyes. Information about the two views of a point in space is processed by neurons that are physically near each other. The brain seems to extract 3-D information from the small discrepancies in these maps and use it to direct a precise pounce.

Neuroscientists have been able to make highly detailed maps of the fingerprint pattern in cat brains, as shown in the figure below (bottom panel). In this patch of visual cortex, neurons carrying information from the left eye (black areas) are interspersed with neurons carrying information from the right eye (white areas), with black and white regions mapping the same piece of visual space. 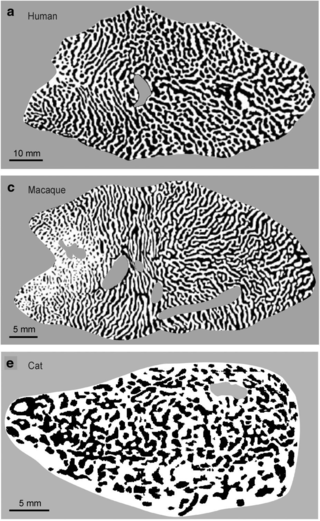 Visual cortex of the brain stained to show maps of the visual world derived from inputs from the left eye (black) and from the right eye (white). Top: Human; Middle: Macaque monkey; Bottom: Cat. The fingerprint-like pattern, which supports stereo vision, evolved independently in cats and in primates.

The figure also shows this situation in humans (top panel) and monkeys (middle panel). Though the fingerprint pattern in cats is not exactly the same as it is in humans, it is clearly similar and may serve the same purpose: to improve our stereo picture of the 3-D world. However, the exact relationship between the fingerprint pattern and visual function remains unknown.

A Shared Solution for Sharp Vision

What’s remarkable is that cats evolved essentially the same pattern of visual system organization as we did, but completely independently, and probably for distinct reasons. It must have arisen independently—and not because our shared ancestor possessed it—because other mammal lineages lack the fingerprint pattern. For us, the importance of the pattern (termed ocular dominance columns) is probably that it supports foraging in trees, as well as other visual skills. For cats, it’s probably about hunting. In both cases, the pattern may allow information about 3-D space to be extracted and acted on.

For better or for worse, the similarity between cat vision and our vision has meant that cats were historically the animal of choice for invasive research in visual neuroscience. An enormous body of research on “deprivation” in kittens developed in the 1950s and 1960s, investigating the effect of all manner of alterations to the visual environment, from suturing their eyes shut at birth, to rearing them under strobe lights or in environments with only vertical stripes. Around the same time, researchers recorded neuronal impulses in the visual brain of anesthetized cats, work that was later awarded the Nobel Prize in Physiology or Medicine. In part because of public unease, cat research is less common now; Most studies in visual neurophysiology involve mice or rats today. But because these rodents have weak visual capabilities, historical research on the highly visual cat remains relevant.

Cat Senses Show Deep Similarities to Ours, But There Are Also Differences

While we share remarkable similarities in our visual system, there are obvious differences between our eyes and cats’ eyes. Cats are active at night and have better acuity than us in low light levels. They also have striking slit-like pupils, which are common in nocturnal predators. And cats are colorblind: they have two types of cone photoreceptors, while most humans have three.

These differences extend to other senses. Being strict carnivores, cats rarely put anything in their mouths that isn’t meat. And one thing meat has very little of is chemicals that taste sweet to us. Because of their diet, cats don’t need to know whether something is sweet. Cats have in fact lost the receptors on their tongues that detect sweet chemicals like sucrose. This is why you will never be able to tempt a cat out of its hiding place with a sweet treat.

But despite our evolutionary differences, humans and cats share deep similarities in how we see. I think this is part of what makes cats so compelling: We almost feel we can see through their eyes. This may explain why we empathize when cats are tricked by a visual illusion, since we are also fooled (see this video, also here).

Cats remain an enigma, which may be part of their appeal. But understanding their sensory world can bring us closer to them.

Thanks to Leah Shafer for recommending classic cat videos. Copyright © 2022 Daniel Graham. Unauthorized reproduction of any content on this page is forbidden. For reprint requests, email reprints@internetinyourhead.com