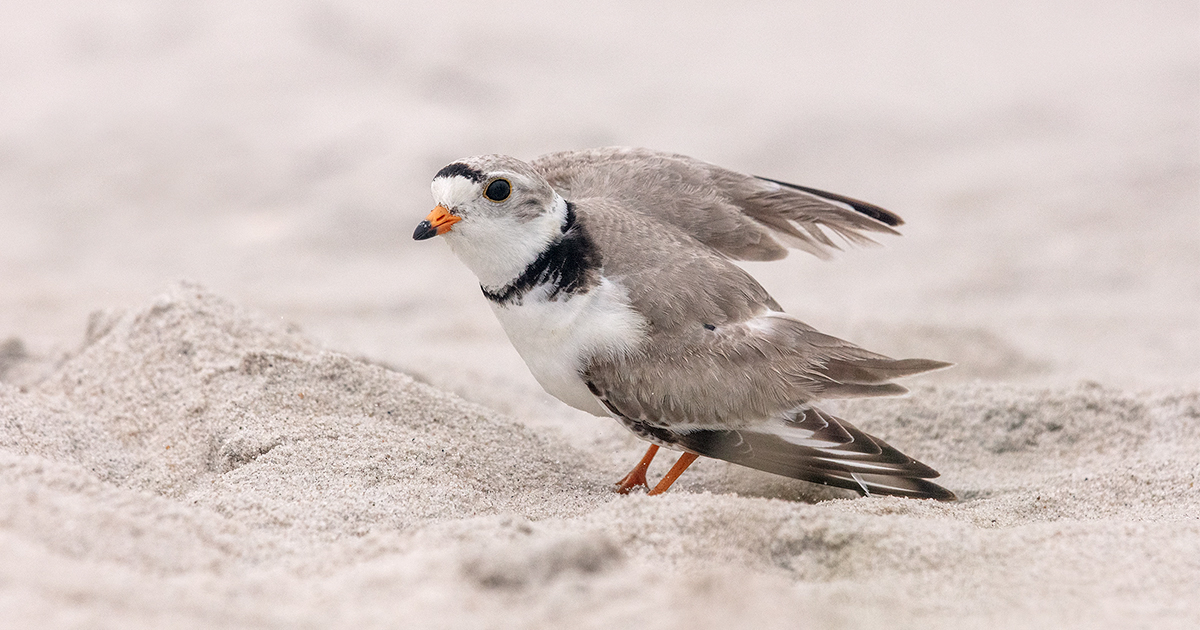 Ornithologist Clinton Francis was leading a class field trip along the California coast when students spotted what appeared to be an injured Killdeer. They watched as the striking shorebird aggressively called and held out a contorted wing. When Francis explained that the Killdeer was faking it, using what’s called a broken-wing display to lure predators away from its nest, a student asked a question that seemed simple, but proved challenging to answer: What other species do that?

Francis knew other shorebirds and some doves performed the display, but he wasn’t sure how widespread it was. So, he encouraged enthusiastic students at California Polytechnic State University to find out. “It’s fun to see these projects,” Francis says. “Students get really curious about something they see in the field and really run with it.”

That simple question in 2016 transformed from a senior project to a peer-reviewed study published in March in Proceedings of the Royal Society B. Francis, along with students and colleagues, found nearly 300 species that perform the broken-wing display across the world, upending the long-held idea that this was mainly a shorebird behavior. “That was super surprising to me,” Francis says.

The broken-wing display is just one of the many creative behaviors animals have evolved to avoid becoming a meal. The eastern hognose snake, for example, plays dead when threatened, rolling onto its back and emitting drops of blood to exaggerate the stunt. Some animals may flush or freeze, like herons and egrets, when an attacker approaches too closely. But evading predators is more complicated during the breeding season, when birds must balance their own survival with preventing the next generation from becoming nugget-size snacks.

Some parents aggressively mob potential attackers to save their chicks: Common Terns, for example, are infamous for their fierce attacks on seabird researchers. Nightjars take a different approach, using camouflage to blend into their surroundings and hide both themselves and their nests. Distraction displays are another set of tools that allow the parent to protect its young and escape at the last second.

These attention-grabbing maneuvers escalate in intensity as the breeding season progresses. “They sort of exist on a continuum,” says Paul Smith, an ornithologist at Environment and Climate Change Canada who has studied shorebirds breeding in the Arctic for almost 25 years. At their simplest, distraction displays might just involve a bird calling to capture an attacker’s attention. Other birds take it a step further, running in a crouched posture away from the nest with its tail between its legs—called a “rodent-run” because it mimics the main prey of some predators—hoping the hungry hunter will follow. And among the most complicated of these behaviors is the broken-wing display, which varies among individuals and species, from the Killdeer’s dramatic performance to a Snowy Plover that remains motionless with outstretched wings.

To identify all birds that use this ploy—not just the well-documented shorebirds—the team of researchers, including co-author and then-undergraduate student Wren Thompson, dove into the literature. “It started with just searching ‘broken-wing display’ and seeing if that was actually an established term,” says Thompson, now a museology graduate student at University of Washington. The researchers painstakingly scanned databases of scientific studies and the Handbook of the Birds of the Worldand surveyed nearly 100 ornithologists and birders to track down additional species, which maybe weren’t formally recorded, that they’d performing performing the display.

Their year-and-a half-long effort yielded 285 species from 52 families across the world. Only one in five of them turned out to be shorebirds, with ducks, songbirds, and even owls using the broken-wing display. “I was stunned,” Thompson says.

And that could be just the beginning, according to Francis. “There’s a lot of species out there that may very well perform the display that we missed, just because someone hasn’t written it down in English, in a place that we could find it,” he says.

After finding the behavior so widespread, the researchers next asked what causes some birds to perform the display when so many other species don’t. They looked at 16 features, such as body size, breeding latitude, and how well each species conceals its nest. Among their findings, the team discovered that birds breeding at higher latitudes were more likely to perform the display than tropical birds. They also found that species which don’t conceal their nests tend to use the broken-wing trick more often than those with well-hidden nests. The combined results point to a larger force at play: predation risk.

“Animals that experience more predation in general may have evolved this broken-wing display—that’s probably the most general type of conclusion you can take from our paper,” Francis says. More specifically, the display is most useful in places where a bird’s main predators hunt from the ground during the day, such as Arctic foxes stalking Ruddy Turnstones on the tundra. Days are also longer at those high latitudes during the nesting season, providing abundant daylight to illuminate the birds’ dramatic performances.

Conversely, among the closely related trogon and woodpecker families, which nest in tree cavities and count snakes and other nocturnal hunters as predators, the researchers found no examples of the deceptive behavior. “That absence—a conspicuous absence—is really interesting,” Thompson says.

The behavior’s wide appearance across the avian family tree—with some species performing the broken-wing display while other closely related species don’t—indicates that it has evolved independently multiple times, emerging wherever species need a way to defend their young, says lead author Léna de Framond, an ornithologist at the Max Planck Institute for Ornithology. “They do it instinctively,” she says. “They don’t learn it.”

Of course, there are downsides to faking an injury. While birds burn some calories performing the behaviour, the biggest potential cost is coming so close to a lethal attacker. “Sometimes birds do get gobbled up by the predators while doing these distraction displays,” Smith says. If the birds aren’t tied to a nest, fleeing is an easier, safer option.

One question that deserves more investigation, Smith says: Why haven’t predators caught on to the birds’ ruse? When he surveys breeding shorebirds in the Arctic, observing a broken-wing display is a dead giveaway for a nearby nest. “You would think a predator would be smarter,” he says.

This video of a Piping Plover performing a broken-wing display was filmed, through a professional conservation program, by a trained shorebird monitor while predator protection was being installed around the bird’s nest. Video: Jim Verhagen

Researchers like Smith are clever enough to recognize the subterfuge, and are careful when approaching the birds they study to prevent harming the young or over-stressing the adults. Birders and others enjoying the outdoors in breeding season should exercise similar caution. Stumbling across a bird emphatically calling and appearing to hold a broken wing is a good sign of a nearby nest—and a clue that you may be too close.

Should you encounter a displaying bird, back up carefully, looking at the ground and retracing your steps to avoid stepping on a nest. Or, follow the displaying adult, which will lead you away from its young. Once it veers off, leave the area quickly and carefully. Then, you can observe from afar this eye-catching example of avian shrewdness and parenting skills.