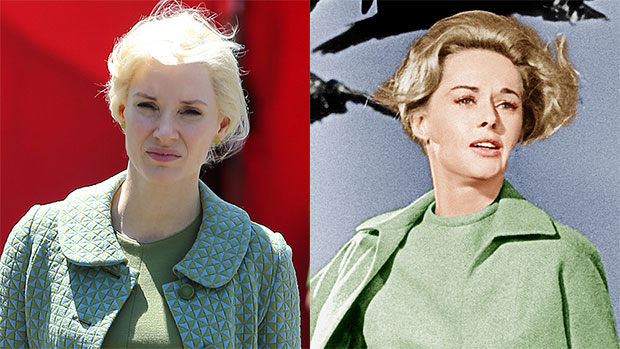 Jessica Chastain45, threw it back to the 1960s in a sophisticated costume while on the set for her recent film Mothers’ Instinct. In the photos that were captured on set, Jessica looked elegant in a chic vintage inspired knee length dress in a retro olive green color.

The look was adorned with a blue and green patterned coat, and she tied everything together with a thick belt at the waist. She also sported classy pointed nude heels, and her typical copper hair was concealed by a platinum blonde wig that was tied up in a loose fitting bun.

The look was highly reminiscent of Tippy Headrin‘s iconic costume in the 1963 Alfred Hitchcock classic horror film called The Birds. Both The Birds and Mothers’ Instinct are phycological thrillers, according to The Daily Mail. It is unknown whether or not Jessica’s outfit choice was intentionally meant to resemble Tippy’s, however, the direct inspiration cannot be denied.

Mothers’ Instinct reportedly revolves around the story of two close friends, Celine and Alice, who live traditional, peaceful lives. However, once personal tragedy strikes their families, they are launched into a world of dark paranoia and guilt. The film also stars Anne Hathawayand a French version was released in 2018 that was critically well received, according to Deadline.

Jessica is clearly no stranger to making bold choices with her attire while on set. During a 2021 interview for The Viewshe gave some inside details about the nude scenes she shot while filming the critically acclaimed HBO series Scenes from a Marriage with fellow Juilliard alumni Oscar Isaac.

Stars Who Make A Statement With Their Clothing: See Bella Hadid & More

“I said to Hagai [Levi] who wrote and directed the series—in the very beginning, I said, ‘I’m comfortable with all of the nudity, but any part of my body that you show, you’re going to have to show the same with Oscar.’ There’s a shower scene that I have in episode two, and you see my body. So now, you see his body. So for me, I wanted it to be balanced,” she explained on the show.