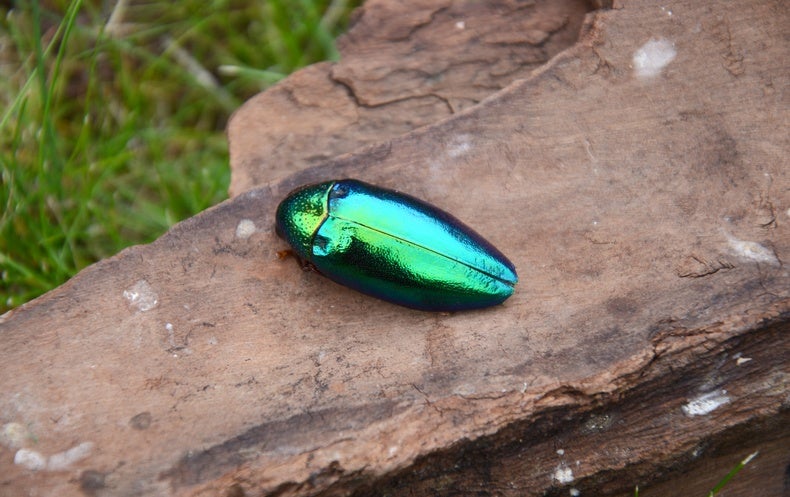 For insects trying to avoid hungry birds, flashy iridescent shells might not seem like the best evolutionary strategy. But in recent years, biologists have shown that iridescence—lustrous shifts in color, depending on the angle of view—can actually camouflage green jewel beetles among sun-dappled leaves. Now a new study published in Animal Behavior iridescence also suggests another way to protect these insects, even when they step into plain sight: birds appear to have an innate wariness of the color changes themselves.

This is the first time iridescence, as opposed to simple glossiness or bright colors, has been shown to deter predators. “It’s actually the changeability, the very hallmark of iridescence, that is important for this protective function,” says Karin Kjernsmo, a researcher at the University of Bristol in England and the study’s lead author.

To test how birds reacted to iridescent beetles’ varying colors, Kjernsmo and her colleagues set out real Sternocera aequisignata jewel beetle shells, along with three types of artificial shells: one a glossy green, one a matte green and one color-shifting but matte. They baited the shells with mealworms, then offered this buffet to day-old domestic chicks (this was to ensure any reactions were innate, not the product of learned predation tactics).

The chicks scarfed down the mealworms under the matte green shells but hesitated at the glossy shells and both types of color-changing ones. A 2017 paper from another lab had shown that birds shy away from glossiness, yet the specific avoidance of the color-shifting nature of iridescence had never been documented before.

Johanna Mappes, a University of Helsinki biologist who worked on the 2017 study but was not involved with the new paper, praises the way Kjernsmo’s team controlled for each type of shell finish, “especially creating matte iridescence signals—it’s really genius.”

The new findings suggest iridescence is an evolutionary two-for-one deal: it helps the jewel beetles hide but can also scare off predators that still spot them. Kjernsmo speculates that this might help explain why so many insects are iridescent: it “allows them to be protected in many different contexts.”

This hypothesis might also explain why these jewel beetles evolved to use iridescence rather than a more typical warning color such as bright red or orange. While some poisonous insects, such as ladybugs and monarch butterflies, use these vivid hues to advise birds to back off, such colors also stand out more. These insects’ poison provides a backup in case they do get noticed. For this species of jewel beetle, which does not have chemical defenses, the extra attention from a traditional warning color might not be worth it—better to blend in when possible.

It is still not clear exactly what it is about iridescence that seems to frighten birds. These jewel beetles may be mimicking other iridescent insects that do have chemical defenses. Kjernsmo says this idea might be confirmed by analyzing the insect family tree to see how often iridescence coincides with poison. Alternatively, Mappes posits, iridescence might simply confuse predators: if a beetle’s color shifts, a predator might not be able to classify it as safe or dangerous.

Though more work is needed to fully understand iridescence as a warning, Kjernsmo says she is proud of how this study demonstrates nature’s nuance and complexity. It can be tempting to find one answer and stop looking, she says, but “it’s really important to realize that colors can actually serve multiple purposes at the same time—that they don’t necessarily evolve for one particular purpose.”