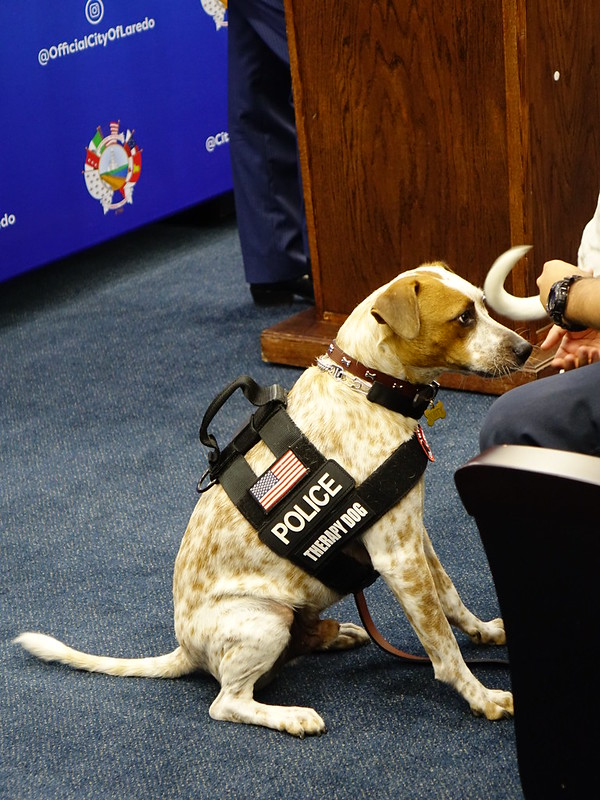 A new initiative was established this week to help adopt shelter dogs for the purpose of becoming therapy dogs who will be trained to help children who have been abused and are currently in court proceedings.

District IV Councilmember Alberto Torres began the program in 2020 and said its impact is twofold.

“As this program continues to gain nationwide popularity, more dogs are saved from homelessness and euthanasia as they are trained to make a big impact on child abuse victims,” the city wrote. “Local dogs, Dusty and Coco, were selected from the local animal shelter to train with K-9 handlers in Florida, making them the first-ever certified police therapy dogs and handlers in Laredo.”

Both dogs were celebrated and recognized during the meeting alongside officers Cesar Esquivel and Vito Cardenas, who also completed their training alongside Coco and Dusty. Torres said the partners have put Laredo on the map for being champions of providing emotional support for crime victims and continuing the initiative of reducing euthanasia rate.

Torres proclaimed the goal is to reduce the rate and lead city efforts to pioneer to save the lives of animals and pets throughout the city. This works in tandem with other agencies throughout Laredo and Webb County that works to find and stop animal cruelty, including the Sheriff’s Animal Cruelty Taskforce.

District judges gathered and praised the move that will put a whole new meaning to dog cases. Judge Oscar Hale said past discussions between him and Torres revolving around therapy dogs would help with difficult cases, specifically those that have child victims.

That case was eight years prior to the initiative, but he added it is clear a dog can help both at homes with children and in the courtroom.

Roy Soto, representative of district attorney Isidro Alaniz, said the therapy dog ​​programs and methods in the district judges’ courts really do help children in dire times when they have to retell the toughest stories and tragic moments of their lives.

Laredo Police Department Chief Claudio Trevino said the canines allow officers to work easier with children under stressful conditions as the therapy dogs help distract and relax them, as well as ease their fears. He added someday in the future, he’d also like to see a component where officers and dispatchers can also visit Coco and Dusty to relieve the stress that comes with the jobs.

“We have a broad use for these canines, and we expect this program to grow,” Trevino said. “We are committed to what we have right here, but we are also committed to grow the program and allow for other officers to come and take on the task, because I know once we get going, the duties are there, the courts are many and the needs are there for this program to go.”