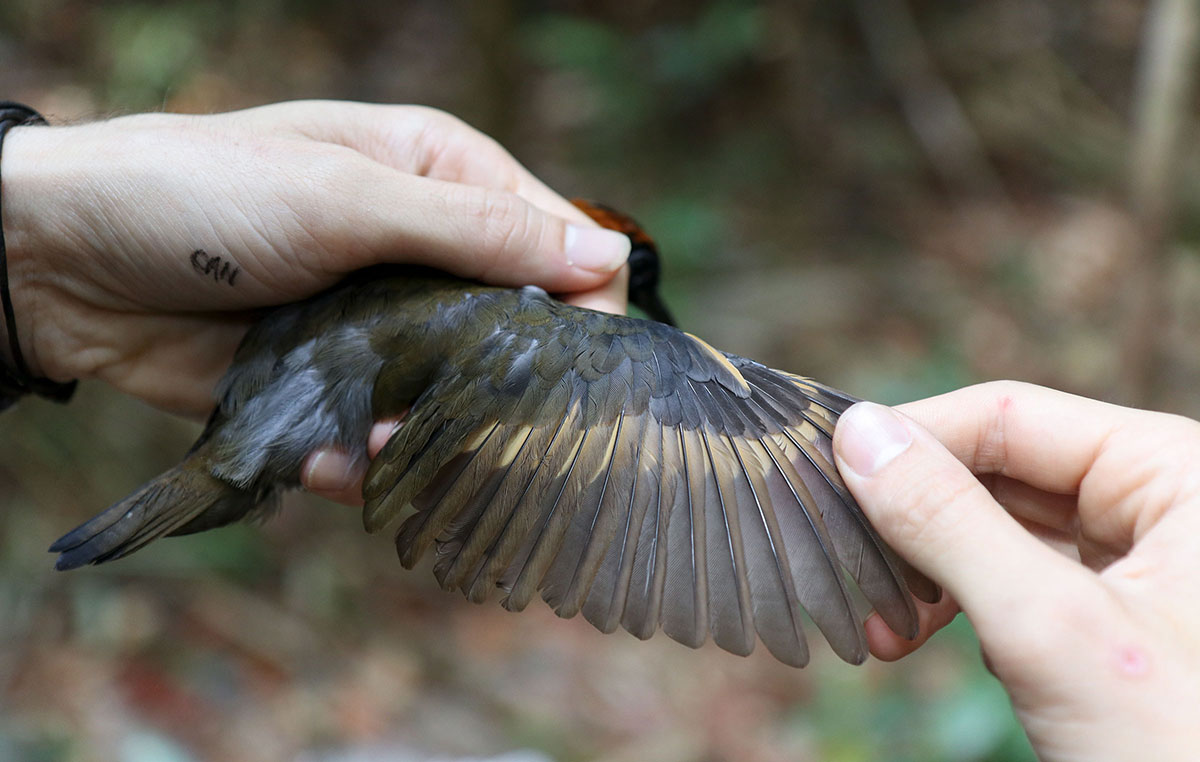 But climate change may be having another, less intuitive impact on birds: A host of scientific studies showing that birds are gradually shape-shifting—their bodies are miniaturizing at the same time as their wings grow longer.

Since the 1980s Amazonian birds’ bodies have decreased in size and their wings have lengthened, according to a study published late last year in Science Advances. After accounting for other factors, the researchers found that the birds’ bodily changes were closely linked to the rising temperatures and shifts in precipitation caused by climate change.

The results, compiled from data covering 77 different species and more than 10,000 individuals from the Brazilian Amazon, support an emerging research trend: multiple studies suggest that birds (and other animals) are shrinking in response to rising temperatures. In one 2010 study of birds captured in Pennsylvania, researchers found 197 of 249 bird species had declined in average weight since 1961, while their wing length remained more consistent (or even increased, depending on species). A 2020 study of more than 70,000 individual birds also found increasing wing length along with reductions in body weight through time for 52 migratory species passing through Chicago.

Though a pattern in the research is emerging, little work has been done to explore why this is happening. What scientists have are theories.

Are These Changes Happening Everywhere?

Before we dig in, let’s make clear: Not all birds everywhere are shrinking. While several analyses, which each included many dozens of species and thousands of individuals, we suggest birds are shrinking due to climate change, there are other studies that show seemingly opposite results.

In certain places birds appear to be getting heavier or developing shorter wings. In one study of California birds, researchers found that body mass increased (albeit by small amounts) over 40 years—though the birds’ wing lengths also increased during the same time period. In a study of wintering ducks, researchers found Mallards and teas in France were growing heavier over the years. And researchers in Spain found that Common Nightingales’ wings shortened over 20 years.

That the shrinking trend isn’t found everywhere in the world doesn’t mean the studies done in Pennsylvania, Chicago, or Brazil are invalid. Instead, it points to the complexity of climate change and ecology. The regional impacts of climate change vary widely. In some places, rising temperatures or shifts in precipitation could be increasing food availability, says Vitek Jirinec, an ecologist at the Integral Ecology Research Center in Blue Lake, California, who led the Amazonian research. “Maybe they’re experiencing different conditions besides just simply [changes in] temperature and precipitation,” he says. “It’s really hard to tease apart some of these threads.” For example, in the case of the fat French ducks, researchers found that milder winters were allowing the fowl to bulk up more and later in the season.

Why Are Birds Shrinking?

In the places where birds do seem to be getting smaller, researchers have a few ideas about why.

One explanation comes down to physics: Bigger objects hold onto more heat. In biology, Bergmann’s rule posits that warm-blooded animals are larger in colder climates and smaller in warmer ones. That’s because larger bodies conserve heat, while smaller bodies disperse it more quickly. Bergmann’s rule also explains why a small cup of coffee cools down faster than a large one: Smaller objects have a higher ratio of surface area to volume, which means more contact with cooler air that absorbs heat.

Previous research has found Bergmann’s rule holds true in birds, and that, in general, birds living in warmer environments are smaller than those in cold habitats. Jirinec and Weeks both consider this a likely explanation for why avifauna are shrinking. Just as humans experience heat exhaustion and stroke when we get too hot, birds are too stressed by excess heat. To avoid overheating, it could be advantageous to be smaller. In that case, smaller birds may be better able to survive in hotter, climate-changed temperatures larger than birds, especially in warm environments like the Amazon rainforest.

At the same time, climate change can drive any number of ecological effects, such as disease, and other environmental chain reactions that cause birds to grow more or less. Even simple temperature and precipitation shifts could affect birds’ ability to find food in a given region. In the case of the bulky French ducks, researchers think warmer winters are producing more food. In other habitats, climate change may instead reduce food options for many birds, and less food means less energy for birds to grow.

However, evidence that birds’ wings are getting longer complicates this theory, Jirinec says. “If that’s true, it’s hard to justify those increasing wings, because that takes energy as well.”

Ben Winger, an evolutionary biologist at University of Michigan and another author on the Chicago study, agrees and adds that the wide array of species included in recent studies makes food-related theories seem less likely. To him, it’s hard to believe that food resources across all of the studied species with their varied diets would be decreasing uniformly—whereas, the data to support temperature increases worldwide is already robust. We don’t know how climate change is affecting what each bird species eats, but we do know that almost all birds are regularly exposed to hotter temperatures than in the previous decades.

Why Are Some Birds’ Wings Growing Longer?

The story behind increasing wing length is even less clear.

Flying is such an important aspect of most birds’ lives that any changes in wing length are probably directly linked to flight adaptations. For example, the Chicago researchers proposed that longer wings help birds that migrate long distances.

However none of the birds studied in the Amazon ecosystem are migratory. To this, Winger says: “Maybe this isn’t so much a response to migration, but to the demands of flight more generally, as bodies are shrinking.” Flight is an energy-intensive activity, and smaller birds have less fat and muscle to power themselves in the air, he says. So, as body mass goes down, wing length might be increasing to compensate for diminishing brawn. Unfortunately, it’s a difficult hypothesis to test. “You would have to put birds in wind tunnels,” Jirinec says.

An alternate theory, called Allen’s rule, states that warm-blooded animals have longer limbs and extremities in hotter climates. For example, antelope jackrabbits that live in Arizona deserts have much longer ears than their snowshoe have relatives in colder northern areas. Larger extremities have more surface area, which better release heat—an important adaptation to stay cool in hot places. But no existing data currently support Allen’s rule in birds, say Jirinec and Weeks. For one, wing length is measured from the “wrist” to the tip of the longest feather. Feathers don’t distribute heat—only parts of the body with blood flow can do that—which means the wing-length metric doesn’t necessarily reflect heat release.

Are These Changes Proof That Birds Are Adapting to Climate Change?

All of the researchers I spoke with pointed out that we don’t yet know if a shrinking body size benefits birds. Body mass has historically been used as a measure of health: Smaller birds within a species are generally assumed to be less fit. It’s possible that birds’ recent miniaturization could be the product of higher stress, in which case the outcome might not lead to better survival.

For instance, Jirinec And his co-researchers found that the birds in the Brazilian Amazon experiencing population declines were also undergoing the same body mass loss over time. If becoming smaller confers an automatic advantage under climate change, he says, it’s not clear why a species shrinking in body size would also be declining in number. Either way, there’s a limit to how small birds can get. “You can’t shrink the birds indefinitely,” Jirinec says. “At some point, it’s going to hit a threshold beyond which the population drops off.”

And no matter the causes, it’s a trend that is concerning. “It’s really hard to overstate the importance of body size,” Winger says. An animal’s ecology, diet, metabolism, and lifespan are all directly connected to its size, he says.

“If body size is changing,” Winger says, “then it probably means a whole lot of other things are, too.”