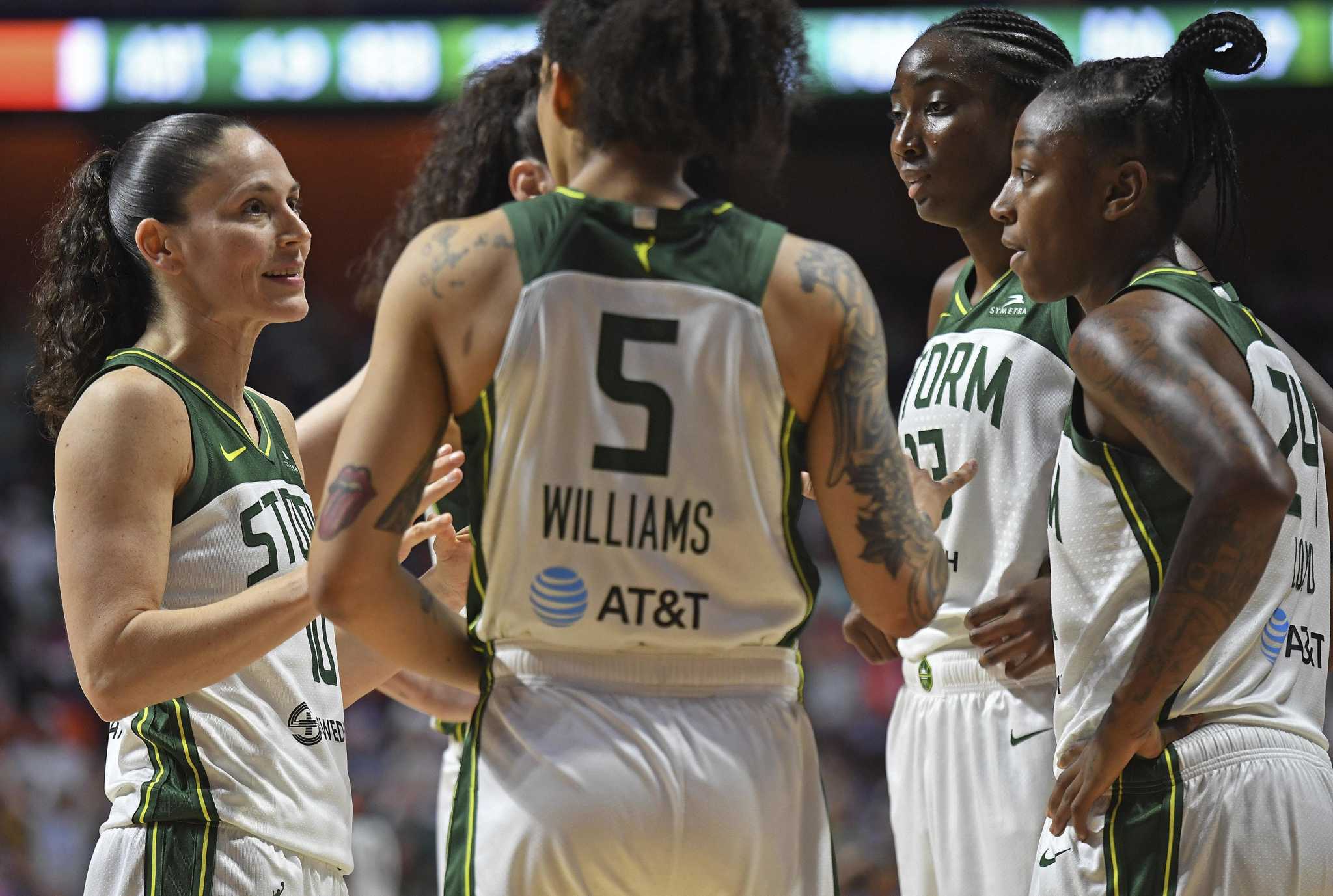 UNCASVILLE — While the Seattle Storm headed down the tunnel from the court to their locker room an hour before tipoff Friday night, Cali Durham charged up the Mohegan Sun Arena stairs, waving precious cargo.

“I asked her to sign this,” Durham, 10, said, holding a small Pride Month poster she’d made, “and my friend, too, and she did.”

Durham was wearing one of several green-and-yellow Seattle No. 10 jerseys dotting the stands Friday night as Sue Bird, UConn legend turned WNBA legend, came to town for the second-to-last time as a pro to play the Connecticut Sun. Bird announced Thursday that this season would be her last.

The Storm, also featuring UConn alumnae Breanna Stewart and Gabby Williams, drew a solid hand as they came out for the pregame shootaround from a crowd that stretched into the upper tier of the arena.

All three Huskies products were starters. All three got applause when they were announced. Bird, called out last, drew a roar as most of the crowd of 7,088 jumped to their feet.

“Of course it means a lot,” Bird said after the game. “Especially being in Connecticut, it was kind of funny to walk out there and see so much green and yellow at the stands.”

Some of the fans wore Bird’s jersey. One, behind the scorer’s table, waved Bird’s UConn jersey. Other…

“There was a bunch of people courtside: Two guys had” — Bird chuckled — “my Sports Illustrated Swimsuit picture, like, on a T-shirt. That was hilarious.”

Bird scored 14 points in almost 28 minutes — the crowd shouted again when she hit a left-side 3-pointer in the first minute — and Stewart led the Storm with 19, but Connecticut pulled away late to beat the Storm 82-71.

“I think it’s special because it’s her last season,” said Durham, from Stonington. “I thought it would be pretty cool to see her in her last season.”

“From the moment that I knew I was going to be drafted to Seattle, my first thought was having an opportunity to play with Sue Bird,” Stewart said.

“Now, looking from the years we’ve had together, what we still have this year, it’s just really making sure you appreciate every moment, leave it on the court. She’s someone who’s a great friend, just an amazing person.”

Current UConn players were also at the game. Paige Bueckers and Azzi Fudd shared photos from the stands on social media, and the team — along with assistant coaches Morgan Valley and Jamelle Elliott — posed for a postgame picture with Bird, Stewart, Williams and Sun director of franchise development Morgan Tuck.

The photo spanned generations of Huskies: Stewart, Williams and Tuck were UConn teammates from 2014 to 2016, while Valley and Bird played together in college from 2000 to 2002. Elliott played at UConn from 1992 to 1996 and the group included incoming freshman Ayanna Patterson, Class of 2026.

The Storm visit the New York Liberty on Sunday at noon at Barclays Center (ESPN). It’ll be the last visit home as a pro for Bird, a Long Island native, which is one of the reasons she made her announcement Thursday.

On July 28, she’ll come back here for her last trip to another home.

“Part of announcing you’re going to retire is it does give people a chance to say hi, get an autograph, wear your jersey, rep you one last time,” Bird said, “put a picture of you in a bikini on a T-shirt. I’m just gonna have fun with it, enjoy it as much as I can.”