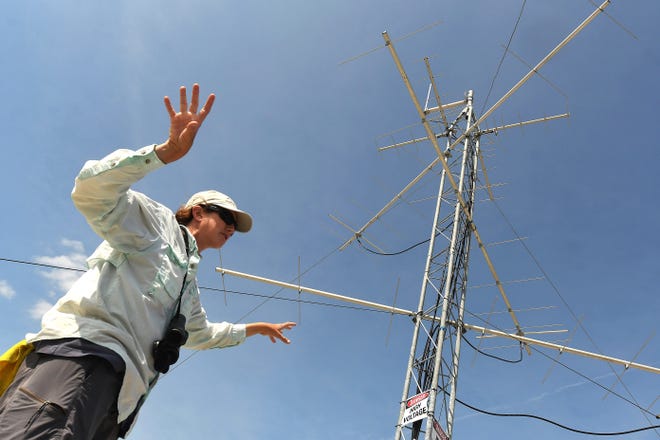 For those of a certain age, the 20-foot antenna tower probably doesn’t look much different from those roof-top monstrosities extending skyward decades ago to watch “I Love Lucy” or “All in the Family.”

But it’s location, standing like a solitary guardian on a sandy berm set back from the ocean on undeveloped Lea-Hutaff Island in Pender County, might raise some eyebrows.

The tower, however, isn’t debris left over from the last hurricane to batter The Cape Fear region. It’s a cutting-edge tracking station that biologists hope can help fill in some of the holes on how human interactions, predation, loss of habitat and climate change are impacting migratory birds.

MORE SUPER STORMS?:Coastal areas love their clean air. A new study finds that hurricanes do, too

“What this will help us show is where they are and when,” said Lindsay Addison, a coastal biologist with Audubon North Carolina.

Funded through a $5,000 donation from the local Cape Fear Audubon chapter and run by Audubon North Carolina in partnership with the University of North Carolina Wilmington (UNCW), the tower works by picking up signals from any bird with a radio tag that flies within 9 miles of the tracking station. The data is then uploaded in real-time via the local cell network to the internet, where it can be viewed and used by anyone.

“If you know how a bird got there or its track, it really helps in developing the best ways to conserve the habitat or the routes they need to get there,” said Marae West, a doctoral candidate with UNCW’s Danner Lab. “For many birds, we just don’t have a lot of that information.”

There’s no question bird populations nationally and globally are in trouble, and climate change is only making the situation worse for a host of species.

MAGIC FRUIT:How the pawpaw, also known as a hillbilly mango, could be a climate change winner in NC

In a study published in the May edition of the scientific journal Annual Review of Environment and Resources, scientists from around the world found that 48% of existing bird species are known or suspected to be undergoing population declines. Populations are stable for 39% of species, while only 6% are showing increasing populations. The status of 7% is unknown. The research comes on top of a 2019 study led by the Cornell Lab of Ornithology that determined almost 3 billion breeding birds in the United States and Canada have been lost during the past 50 years.

Among the species under severe pressure is the saltmarsh sparrow which largely lives and nests in coastal marsh areas along the US East Coast, a habitat under severe stress due to stronger tides, rising seas and destruction from hurricanes — all symptoms of increased climate change.

MORE:In a warming world, ‘Cat 6’ hurricanes could soon be coming to a coast near you

West, whose research is focused on local marsh sparrows, said saltmarsh sparrows are estimated to have experienced a 9% annual population decline since the 1990s, and could face extinction by the middle of this century.

Addison said Lea-Hutaff Island, which is squeezed between Figure Eight Island to the south and Topsail Island and managed by Audubon, is a prime location for a tracking tower because of the number of birds that traverse the NC coast during their migrations or to nest or even over winter here.

“And Topsail Inlet and Rich Inlet are already important areas for these birds since many other inlets are heavily developed and trafficked by people,” she said, referring to the two inlets at either end of Lea-Hutaff Island.

The new tower, which was installed this spring, also fills in a gap in the ever-growing worldwide Motus wildlife tracking tower network. Working together, data from the towers allows researchers to follow the path of migratory birds. The information can also be used to track changes in species and numbers of birds traversing certain areas and help scientists determine the reasons for the changes. Motus towers are already in place on Bald Head and Masonboro islands in Southeastern North Carolina. Federal biologists also have installed towers in the Cedar Island and Pea Island national wildlife refuges further up the coast.

The towers catch “pings” from birds that have been equipped with small radio transmitters, which are intentionally kept to less than 3% of an animal’s mass so as not to hinder their normal activities.

West said each transmitter has its own frequency.

“So you know the exact bird that it is when it is tracked by one of the towers,” she said, noting that a painted bunting tagged on Bald Head Island has been tracked migrating to Puerto Rico before returning to the Brunswick County island.

Back on Lea-Hutaff Island, Addison said the data garnered from the Motus towers will help Audubon improve its management practices to make protected areas like the Pender County undeveloped barrier island more welcoming and useful to the coast’s winged wanderers, for nesting purposes or just as a rest stop during their long travels. The information also could help federal and state regulators in crafting rules and defining areas for development, both on and offshore, that have the least impact on migratory birds.

“This is a tool that we just don’t have now, so it’s very exciting,” Addison said. “And we’re hoping for lots of pings.”

Reporter Gareth McGrath can be reached at GMcGrath@Gannett.com or @GarethMcGrathSN on Twitter. This story was produced with financial support from 1Earth Fund and the Prentice Foundation. The USA TODAY Network maintains full editorial control of the work.