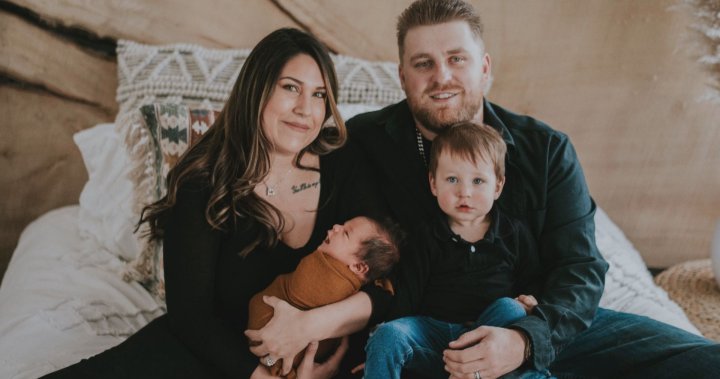 A northern Alberta family is sharing their harrowing story after having to escape a trailer fire. While the parents and kids were able to get out, not everyone did.

It was a night Apryl and Steven McDonald will never forget.

“I looked through the (window), I see my baby sleeping in the bassinet with the flames through the window behind him, the thick smoke,” April McDonald, the mother of two, said.

This was supposed to be a summer filled with family fun by the lake.

In May, the McDonald’s and their two young children moved with everything they had to a lakeside community at Lesser Slave Lake — three hours north of Edmonton. Then early Thursday morning just a month after moving in, devastation struck.

“I woke up in a daze,” Steven McDonald said. “I went and opened my camper door and the whole side of the trailer was on fire already.”

In a panic, the McDonald’s grabbed their kids and escaped.

“If I would have slept five minutes longer, I don’t know if we would have made it out,” April recounted.

“Our dogs didn’t follow us out of the camper and the door was already in flames,” he said.

Steven said he rushed back and tried to open the burning door, but couldn’t.

“At that point, it was too late, I couldn’t open the door… I couldn’t get them out.”

The flames were too strong and Steven suffered second-degree burns in the process.

“The flames… they burnt from my forearms all the way up to the top of my shoulder, got the back of my neck and my face,” he said.

Are you prepared for a house fire? Tips to plan your escape

Fire crews arrived and put out the blaze. The fire was believed to have started by the fridge.

Steven now has to go to the doctor every day to get his bandages changed.

He said while the burns do hurt, the physical pain doesn’t compare to the emotional pain he and his wife now feel, having lost their pets and belongings.

“Everything that we basically used burned up in that fire,” he said.

The family has received some support from friends and family but says they are far from getting what they lost, back. A GoFundMe has been created to help the family, with a goal of raising $10,000.