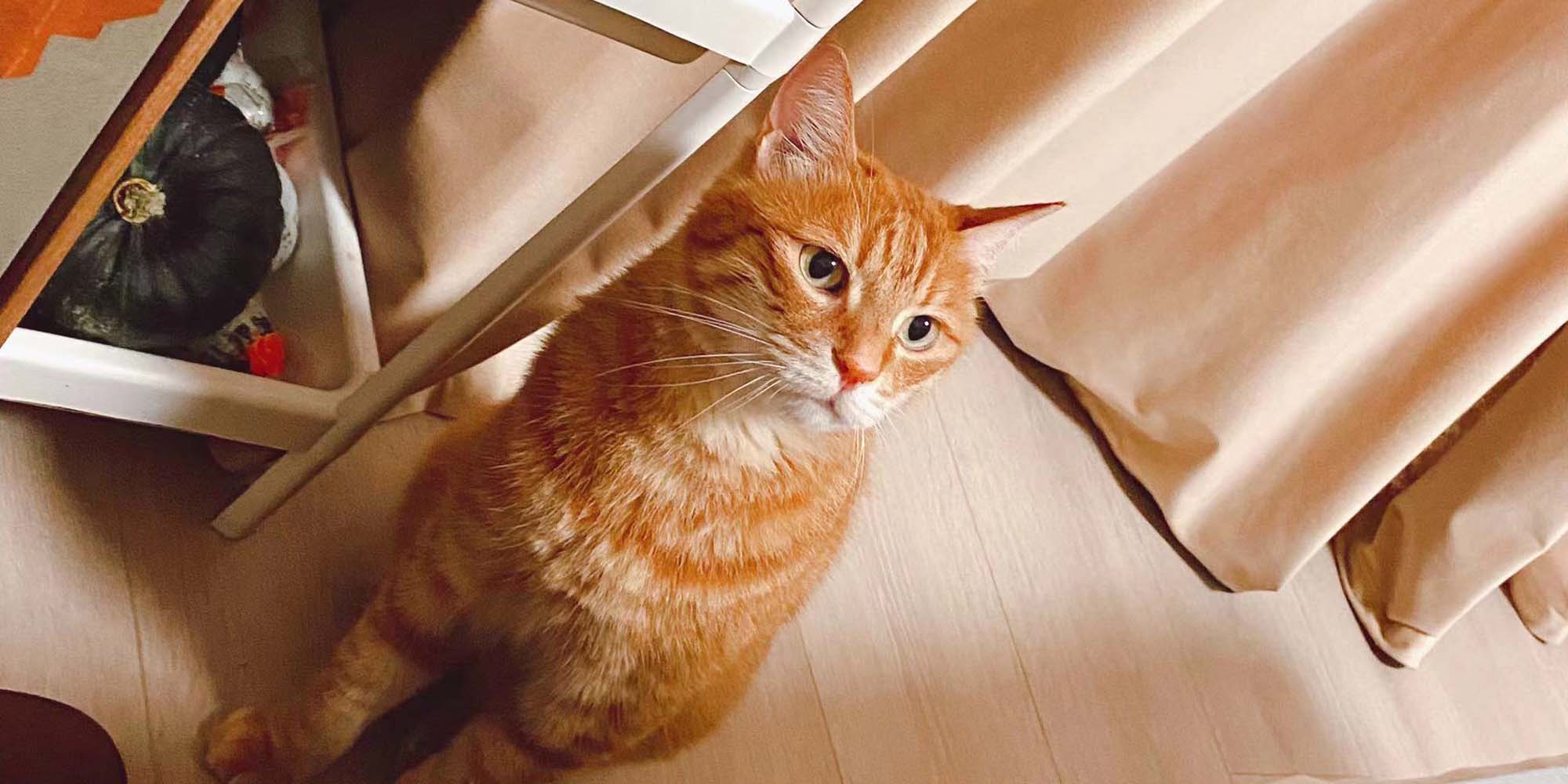 Zhaocai is out of a job.

Two months away from the office and locked down at an unfamiliar apartment, he’s withdrawn into himself, becoming more suspicious of strangers. He spends much of the day sleeping, or keeping to himself quietly. At night, he gets into bed and mewls for attention.

Zhaocai is part of a growing group displaced by the contraction of China’s startup economy: laid-off office cats.

During the venture capital fat years, many startups adopted cats as office mascots, to build a warm atmosphere, or for good luck. Search “company cat” on social network Xiaohongshu, and hundreds of videos of these white-collar cats pop up. One poster said their company has seven.

Zhaocai arrived at the office skinny (left), and put on weight at a housecat (right). Courtesy of Amilia Chen

But in recent times a weak economy and pandemic-era restrictions have decimated the startup scene. When companies shut down offices or go out of business, office cats can wind up out of a job, and a home. Chinese non-fiction platform TrumanStory profiled four laid-off cats in tech hubs Hangzhou, Shanghai, and Beijing. Some of them were adopted by employees, while others wound up on the street.

Zhaocai was a brash young tech cat. He applied for the job himself, walking into the office of Amilia Chen’s employer on a hot summer day, lean, hungry, and confident.

The Shanghai-based AI company, a noted player in intelligent picture generation, frequently left its door open, and one day in July last year a skinny orange cat walked in “with a swagger” to get out of the heat. Chen’s first impression of the cat was that he was “skinny but mettlesome.”

Almost half of Chen’s 30 colleagues owned cats, and they wanted to keep him. The company’s CEO wasn’t sure at first. “He was worried that during nights when everyone went back home, the cat might push over computers and bite the data cable, which is the pillar of an internet company,” Chen said. Cat lovers proposed that they could buy a big cage and put him inside it at night. The CEO still felt hesitant.

On a business trip with the CEO, Chen attempted to convince him: “Every colleague wants to keep it. We will feel upset if you don’t allow us to do it.” He relented. They gave him the name “Zhaocai,” or “pursuing wealth,” for luck.

Staff formed a cat collective. If an employee wanted to pet the cat, they needed to join the group and pay a 66 yuan ($9.86) monthly membership fee. It funded food and daily essentials, and a rainy day fund for pet hospitals and insurance.

For the right to decide on important issues for the cat — like what food to feed — members needed to do extra unpaid work: cleaning the litter box, washing the cat, or taking him to get vaccinated.

“After the cat settled in, our work and our mood improved,” Chen told Sixth Tone. When staff got tired of work, they would pet the cat or cuddle it to release stress. Some nights, Zhaocai snuck out of the office before people could put him into the cage, coming back the next morning. Once, Chen went to the office early, and found Zhaocai sitting in front of the closed glass door, meowing softly for someone to open the door.

Zhaocai at the office. Courtesy of Amilia Chen

In mid-March, Chen’s company started to work from home because of the Shanghai pandemic. At that time, no one knew what would happen in the next two months. An employee took Zhaocai home, but her husband was allergic, so the cat moved to Chen’s home.

She was glad she did. When the lockdown stretched out to two months, the company was essential. At night, when she got into the bed, Zhaocai would run to her and ask to be petted. Then, he would lie on the bed, lean on Chen’s leg, and find a comfortable pose to fall asleep. “I would have gone crazy if I didn’t have him,” Chen said.

Not long after that, an investor withdrew and the company was forced to shut down. “The pandemic and the war in Ukraine made investors more-intensive, and our company is capital-intensive because R&D requires high amounts of money. Once we stop getting money, we cannot survive,” Chen said.

Chen and her colleagues mostly had soft landings. She transferred to the defunct startup’s parent company. Coming from an industry leader, other staff found jobs easily. But for Zhaocai, the company had been home.

They began looking for an adoptive home, but Chen soon regretted it and felt she could not separate from Zhaocai. She decided to keep him.

Other cats were less lucky. One cat profiled by TrumanStory was raised to help pitch products on livestreams, and abandoned when the company shut down its “live commerce” department after a poor performance. Guo Site, an influencer on the Twitter-like platform Weibo, wrote that a company next to her own adopted a small white cat, named it Liuyi (or “600 million”), and then gave up on it when they moved to a new office. One of Guo’s colleagues adopted the cat, he wrote.

When Shanghai its two-month lockdown in June, Chen and her colleagues ended to go back to the office to pack their things and say goodbye. Several asked her to bring Zhaocai in. “Everyone wanted to see the familiar things in the office one last time. We regard Zhaocai as a part of this office,” Chen said.

But she worried that he wouldn’t take it well. He was sensitive to changes of environment, and lockdown had left him “taciturn and afraid of strangers.” “After thinking twice, I was still worried about Zhaocai’s mental health after a long lockdown.”

Chen decided to keep Zhaocai. Most of the time, he stays at her home. But sometimes, when she feels that Zhaocai is happy and the weather is good, they go for a stroll, breathing some fresh air outside.