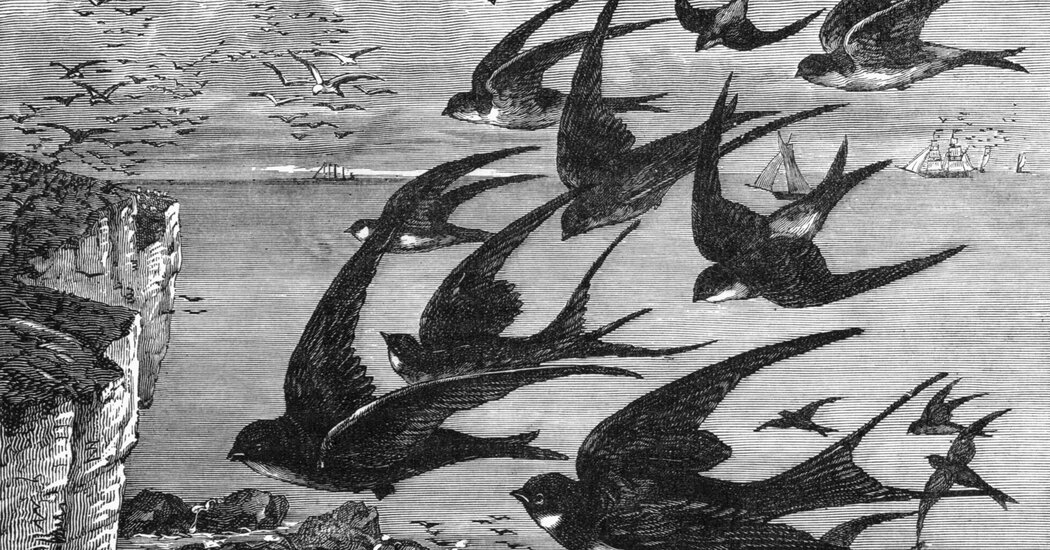 EAST CHATHAM, NY — It’s always a relief when the swallows return. One day, they’re suddenly here, flickering around the house eaves, and whatever was waiting on them to begin — like spring — can now begin.

Same with the bobolinks, which return a little later. One day in early May the bumblebee-colored males are again fluttering over the fields, spilling their tangled song everywhere. It’s all so definite. No waiting for seeds to sprout or buds to burst, no wondering when the beech leaves will fill out. Suddenly there are birds, birdsong and bird flight where there was stillness.

It’s a relief, as I say, but it shouldn’t be a relief. And yet it is. For the last few springs, I’ve felt a secret dread that this might be the year the swallows and the bobolinks don’t return — that something might have gone wrong in their migration.

The barn swallows overwinter in Central and South America. And the bobolinks? They make a 12,500-mile round trip, over the Amazon and as far south as Paraguay. When they return — and I feel relieved — I realize that my conception of spring now depends on their entire migratory landscape, on how humans are altering bobolink-land, all the way from my field where they nest, at the northern end of their range , to the southernmost point of their route and back again.

Bobolinks have always been migrating long distances, and now that I live beside a field where they breed, I’m suddenly aware of it. What I’m also aware of now is the scale of change in the world these birds fly through — the shift in climate severity, in seasonal patterns, in land-use, in habitat destruction, in everything that can affect their survival. Their presence has extended my awareness into a world from which the birds return each spring, as if from peril.

Inevitably this makes me think of Gilbert White, the 18th-century Anglican clergyman who lived in the south of England and whose 1789 book, “The Natural History of Selborne,” has been called the first work of ecology. White was fascinated by the swallows in his village of Selborne, but he had no idea what became of them in winter. There were many theories, including hibernation, but no sure knowledge. “After all our pains and inquiries,” White wrote, “we are not yet quite certain to what regions they do migrate; and are still farther embarrassed to find that some do not actually migrate at all.”

Opinion Conversation
The climate, and the world, are changing. What challenges will the future bring, and how should we respond to them?

And so I can’t help wondering what spring must have felt like to White when the swallows returned from wherever — from a place he didn’t really know how to imagine. Was it different from my sense of spring? After all, I’ve never seen “my” bobolinks on their winter grounds.

But yes, I think it was different. White suspected that the swallows might freeze wherever they were hibernating, “like insects and bats, in a torpid state.” Yet to his mind there was something almost magically local about swallows — the way “the return of the sun and fine weather awakens them” as though they were somehow inherent in his garden. It may have felt to White as though spring, in the form of swallows, came welling up from within his local purview — rather than returning from a risky journey into a shape-shifting world.

Like everyone else, I wonder about the fate of the seasons in an era of climate change. I’m not a record-keeper like Gilbert White, so I can’t say, from personal information, how much spring has shifted. I know it has. I feel it, though I have a terrible memory for the way the seasons arranged themselves in previous years.

If the boundaries of spring have blurred for me now, it’s because the boundaries of where I live — and where I I live — have also imagine blurred. Some part of me takes flight with the swallows and bobolinks in late summer, out into a world where everything is beginning to be different faster in ways that no one can predict.

White found it implausible that a swallow fledgling, just a few weeks old, could migrate, as swallows do, from Selborne as far south as the Equator. I don’t know what tells the swallows and bobolinks here when it’s time to go — no one really does. But their sudden departure is an annual clue to their sensitivity — to how closely and intently they’re cued into the rhythms of their habitat, a habitat I share with them for a couple of months every year.

I try to remember this: I can imagine their migratory pattern, but they have to fly it, whatever is out there, whatever has changed, wherever they’re going. My sense of spring — my relief that it’s returned — depends more than I ever imagined on changes whose effect I won’t know until next spring, when the swallows and bobolinks return — or don’t.

Verlyn Klinkenborg was a member of the Times editorial board from 1997 to 2013. He is the author of “Timothy: Or, Notes of an Abject Reptile” and teaches at Yale.

The Times is committed to publishing a diversity of letters to the editor. We’d like to hear what you think about this or any of our articles. Here are some tips. And here’s our email: letters@nytimes.com.