BENTONVILLE — The Orchards Park dog park and playground will open today with a celebration from 10 am to 1 pm, Parks and Recreation Director David Wright said.

A ribbon cutting will he held at 11 am, and Mayor Stephanie Orman will speak.

Orchards Park is on the southeast corner of the intersection of Northeast J Street and John DeShields Boulevard, across from the Amazon and Crystal Bridges Museum of American Art.

The dog park will be 4 acres, more than double the size of the one on North Walton Boulevard dog park, which opened in 2009, he said.

The cost for the Orchards dog park and new playground equipment was $750,000. The Walton Family Foundation provided a $500,000 grant, Wright said.

“I’m really pleased with how it turned out,” Wright said. “It will be nice to activate that space.”

Workers put the finishing touches on the park Tuesday. The only item left to be installed is the park pavilion, which should arrive in late July or early August, Wright said.

The dog park is split into two sections with their own entrances — one for small dogs and the other for large dogs. The small dog area takes up about 30% of the park, Wright said.

Today’s event will include 15 vendors and a dog fashion show. There will be plenty of water for pets and humans, too, Wright said.

“Normally, I would expect a lot of people to turn out,” he said. “It will depend on the weather. I don’t expect people to be there all four hours because their animals will get hot.”

The National Weather Service in Tulsa, Okla., expects sunny skies with a high of 99 today.

Tamala Stewart of Centerton planned to attend today’s event with her two dogs, Sophie and Stevie. The dogs will be decked out in Hawaiian outfits for the occasion.

The Orchards dog park will be a bigger place for dogs to roam and have more parking compared to the north Bentonville dog park, where parking can become stretched because of how many people use the dog park and those who park there and ride bikes, she said .

“It’s close by, and there will be different things for the dogs to do,” she said of Orchards. “Having another dog park is great. It’s a great way to make friends.”

Another new city dog ​​park will be at Creekside Park, which is under construction.

The park will sit on a 25-acre site and connect with a 1.6-mile trail that will run from Southwest 28th Street to Southwest Greenhouse Road, Wright said. The Walton Family Foundation provided a $1.4 million grant for the trail, he said.

The city has a $7.35 million agreement with Flintco to build the park. Amenities will include a lighted dog park, destination playground, splash pad and cricket pitch, according to the city.

“That’s been a big request I get,” Wright said of a lighted dog park. “You get to about 5:30 pm later in the year, and it’s dark, but it’s still warm outside and people are not ready to go home yet.”

About 85% of the project will be paid from fees developers pay before receiving a certificate of occupancy, Wright said.

The park will be adjacent to Osage Creek Elementary and Creekside Middle schools.

The city’s parks master plan suggests four dog parks, one in each of the city’s four quadrants, Wright said.

There also is a dog park at Osage Park north of Lake Bentonville. The Walton Family Foundation built the park, and it’s maintained by the Peel Compton Foundation. The park is open to the public but isn’t a city park, Wright said.

Signs and preparations were going on Friday June 24, 2022 for the Orchards Park dog park and playground in Bentonville opens today with a celebration from 10 am to 1 pm (NWA Democrat-Gazette/Spencer Tirey) 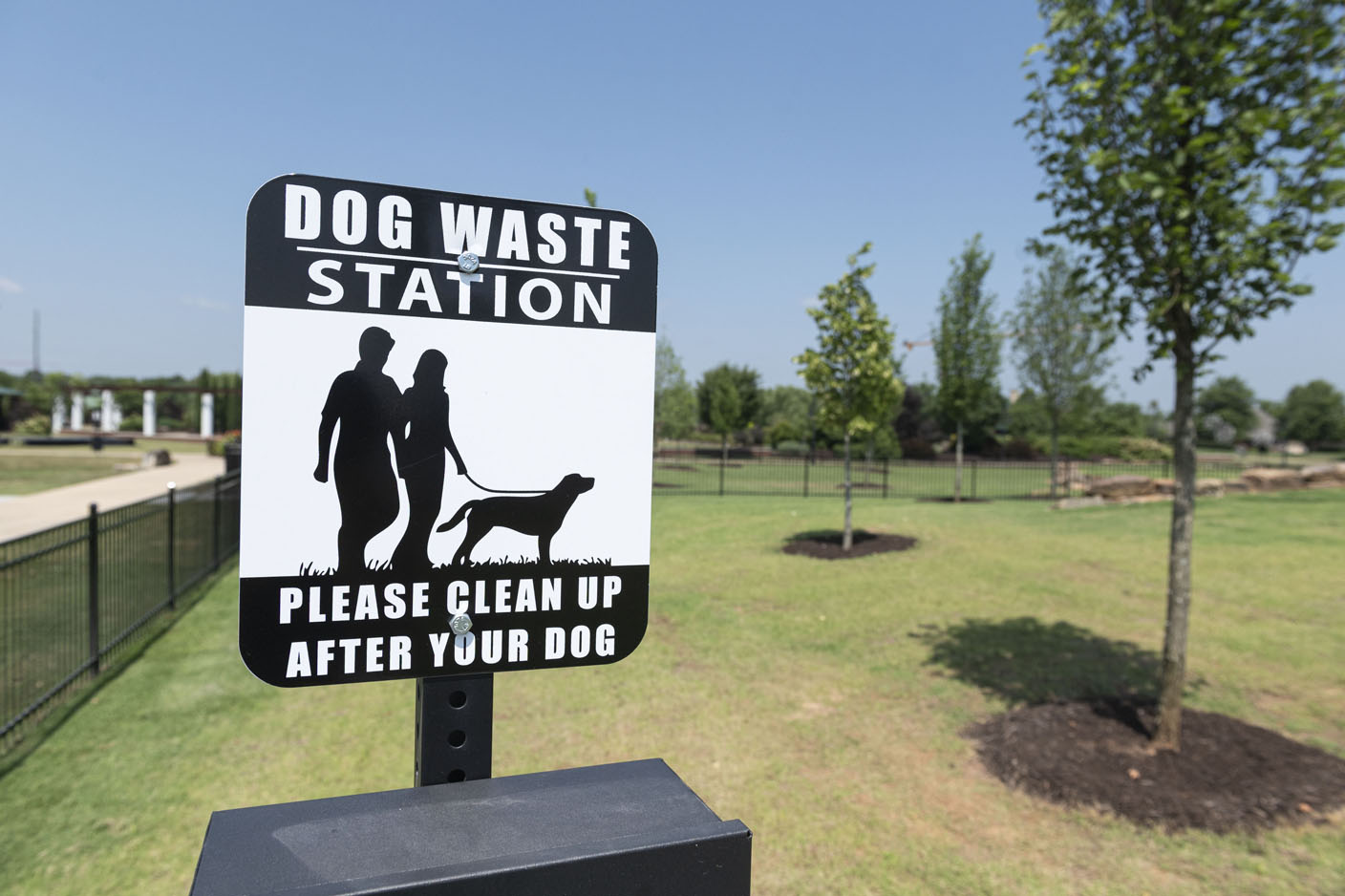 Signs and preparations were going on Friday June 24, 2022 for the Orchards Park dog park and playground in Bentonville opens today with a celebration from 10 am to 1 pm (NWA Democrat-Gazette/Spencer Tirey)