By Wolf Richter for WOLF STREET.

Total assets on the ECB’s gargantuan balance sheet as of August 5, released today, dropped by €18 billion from the prior week, to €8.75 trillion. It was the fifth week-to-week decline over the past six weeks.

Assets have fallen by €90 billion from the peak on June 24, to the lowest level since March 25. But given that gigantic pile of assets, the €90-billion decline, which in normal times would seem like a huge amount for normal people , is just a dip of 1%.

The two categories of the ECB’s QE assets – lending related to Monetary Policy Operations and securities holdings – both fell:

On July 21, the ECB announced a rate hike of 50 basis points across all its policy rates, which brought up its deposit rate to 0.0%, thereby exiting its absurd negative interest rate policy.

At that time, the ECB also announced a new tool – the Transmission Protection Instrument (TPI) – that would allow the ECB to perform quantitative tightening without triggering a euro debt crisis where government bond yields of fiscally weaker Eurozone countries spike, threatening their ability to roll over maturing debts and issue new debts.

During the Euro Debt Crisis, spiking sovereign bond yields caused Greece to default on its government bonds, and threatened other countries, such as Italy, Spain, Portugal, and Ireland.

The TPI is designed to prevent a sovereign debt crisis and keep the Eurozone glued together, even as the ECB hikes rates and sheds assets to fight raging inflation. It’s called the anti-fragmentation tool for that purpose. I call it the glue gun.

Under this policy, the ECB is able to unequally shed assets, for example allowing German and French assets to roll off faster than Italian or Spanish assets.

The end effect is still QT, with overall asset holdings declining, but this QT is spread unequally across the sovereign bonds of various countries. It may mean that the ECB’s bond holdings of some countries, such as Italy, might not decline, or might even increase, as its holdings of German, French, Austrian, and Netherlands bonds might fall more sharply.

Why QT and Rate Hikes? Worst-ever inflation in ECB history.

In its history of just a little over two decades, the ECB has never encountered the kind of raging inflation that is now tearing into the economies of the member states. And people are getting very frustrated.

The overall consumer price inflation rate for the Eurozone in July spiked to 8.9%: 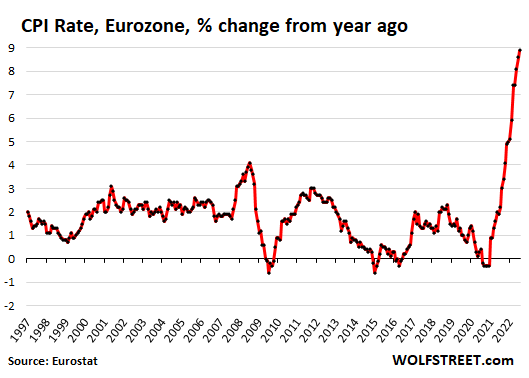 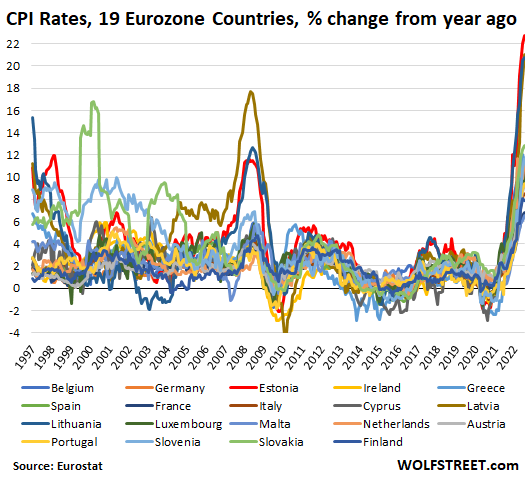 The ECB is ridiculously far behind the curve with €8.75 trillion in assets still on the balance sheet, and declining way too slowly, and with interest rates at 0%, while inflation is 8.9%. At this point, the ECB is still throwing lots of very volatile monetary fuel on the raging inflation fire. It’s still an inflation arsonist, and not an inflation fighter. But it is making the first tentative steps in the right direction, though slowly, too little, and way too late.

But the ECB has managed to do QT before, and in a fairly big way: In the two years of 2013 and 2014, its total assets fell by about one-third. But the chart also shows just how unthinkably crazy the ECB got afterwards, particularly in March 2020, and that the huge bout of inflation shouldn’t really surprise anyone: 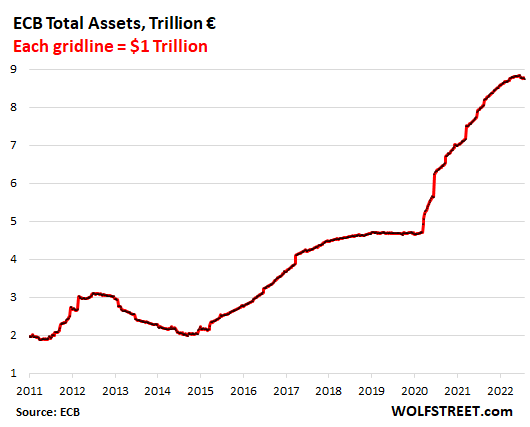 Enjoy reading WOLF STREET and want to support it? Using ad blockers – I totally get why – but want to support the site? You can donate. I appreciate it immensely. Click on the beer and iced-tea mug to find out how:

Would you like to be notified via email when WOLF STREET publishes a new article? Sign up here.