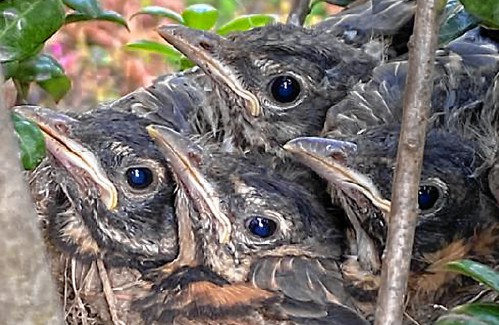 Today’s column will discuss two separate events that illustrate the powerful ability of birds to bring joy to the lives of humans. The first event took place at my school last week, while the second happened in my brother-in-law’s front yard. Both feature the unexpected appearance of birds in and around buildings. I’ll let you take a look at the photo and then give you time to think about it in anticipation of the story associated with it. But first, the event that took place at my school.

It was a regular Wednesday morning and my physics students were working on problems involving electricity and electric circuits. I was at my desk trying to select a reasonable collection of problems for the last exam of the year. The room was quiet and everything was running smoothly on autopilot when a colleague came in with an interesting problem.

Apparently, there was a bird that had made its way inside one of the classrooms down the hall and I was the person that was alternative to the remedy the situation. So, I left my class in the hands of my colleague and headed down to room 320 where I found a group of excited students looking at a mourning dove that was perched on a curtain rod near the top of a very tall window. They had already named the bird Leonard and I knew this was going to be a tough one!

None of the windows had shades that could be pulled down, which explained the DIY curtain rod and the homemade curtains. This was a problem because in a well-lit environment, birds will instinctively fly upwards away from danger. If the room had had shades, then the room would be dark except for a single window left open. The bird could be coaxed to fly and it would then fly toward the light; Conveniently leaving the room with minimal fuss.

But this bird was healthy and in no mood to come down toward me. I was going to have to get up onto a table and see if I could pick up on a favored flight path so that I might snag the bird out of the air with my hands. This is a difficult maneuver to pull off because you want to capture the bird without injuring it. I was not looking forward to this because it would cause the bird tremendous stress. But then fate stepped in and handed me an amazing turn of events.

At one point the bird tried to fly straight toward the window from its curtain rod perch and it ended up falling down between the window glass and the curtain. In essence, the bird had been gently captured by a big, soft net. I quickly pounced on this opportunity to gently pin the dove to the window and then even more gently reach around and grab it with my hand. Once this was accomplished, I decided to teach the kids about mourning doves.

These were 16- and 17-year-old kids and they were all extremely excited. It is quite possible that none had ever seen a wild animal up close and I was immediately surrounded and bombarded with questions. I showed them the correct way to hold a bird to prevent it from injuring itself. I explained that doves had a habit of shedding feathers as an anti-predator adaptation (it makes them “slippery”) and then I let each student gently touch the bird. The smiles on their faces were magical. The dove was identified as a female, the students said that its name was still Leonard and I safely released the dove out the window.

The other event involving the surprising appearance of birds actually happened at my brother-in-law’s house. He lives on a cul-de-sac in a quiet suburban neighborhood and there are a few ornamental plantings near his house. At some point he discovered a robin nest full of chicks that were just about ready to fledge and the joy in his messages was unambiguous. Many photos were taken (including the one that I have shared with you today) and several updates were forthcoming. Even more charming was when he asked if I could do a story on these baby birds.

Hidden among the words of his updates was a clear sense of excitement and joy was just like the joy that I witnessed on the faces of the students who had the interaction with Leon the mourning dove. Baby robins are adorable, but I think that there is also something uplifting about the idea that wild animals are quietly living their lives all around us; Sometimes right under our noses.

Finally, I think both of these stories shed some light on the existence of a human quality that EO Wilson once called “biophilia.” Basically, this is the idea that humans have an innate desire to interact with, or commune with, other living things in nature. One could argue that many of us live in very artificial surroundings and are almost completely cut off from nature. However, when nature presents itself to us, the innocent and almost child-like desire to pet an animal, love an animal and care for an animal’s wellbeing comes rushing out. Birds are creatures that often live in close proximity to humans and for this reason I think that birds have an unmistakable ability to bring tremendous joy to our lives.

Bill Danielson has been a professional writer and nature photographer for 24 years. He has worked for the National Park Service, the US Forest Service, the Nature Conservancy and the Massachusetts State Parks and he currently teaches high school biology and physics. For more in formation visit his website at www.speakingofnature.com, or head over to Speaking of Nature on Facebook.