You’re heading to a store. A checklist in hand. You’re trying to memorize it so that you don’t have to keep looking up and down like a nodding seagull. Milk. Bread. The whole wheat kind. A vial of tiny pine needles. Chicken breast. And… A cat?

You stop and stare at the friendly feline. Its gaze draws you closer until you somehow arrive at the pet food section and the cat points out what it’d like. Are you going to deny it one ounce of food? Most likely not. Unless you’ve sold your soul, but that’s a topic for another day.

But this lady went the extra mile and decided to adopt the cat, providing it with all the love and care possible. Before we dive into the details, dear reader, I’d like you to leave your own cat stories in the comments below – how did you and your cat meet? Your upvotes and follows are greatly appreciated as well!

A clever stray kitten positioned itself outside a store in Mexico, mesmerizing all empathic feline enthusiasts to do its bidding, aka buy it some food. Its next target would become Tania Santos, who was heading in to do some shopping.

Her eyes fell on the thin white cat and the spell was cast. She walked up to the feline, attempting to give it some pets, but before she knew it, they were heading for the pet food section. The cat did not hesitate, knowing exactly what it wanted. Obviously, she couldn’t let the little guy down, so she obliged and bought him a packet of food.

Truly, the cat could teach a class in persuasion and I’d pay good money for it.

The clever kitten cast a spell on her, making her follow it to the pet food section as if to ask for some treats. Of course, Tania obliged 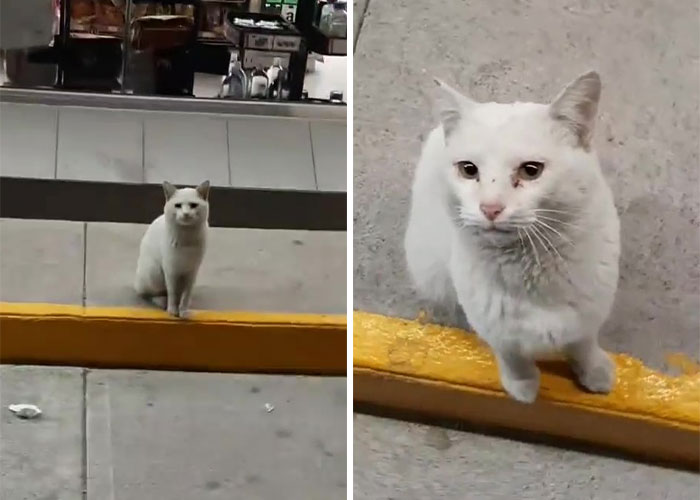 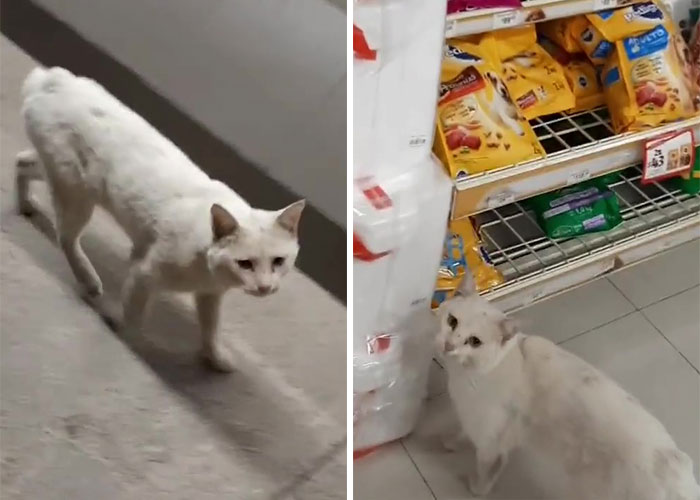 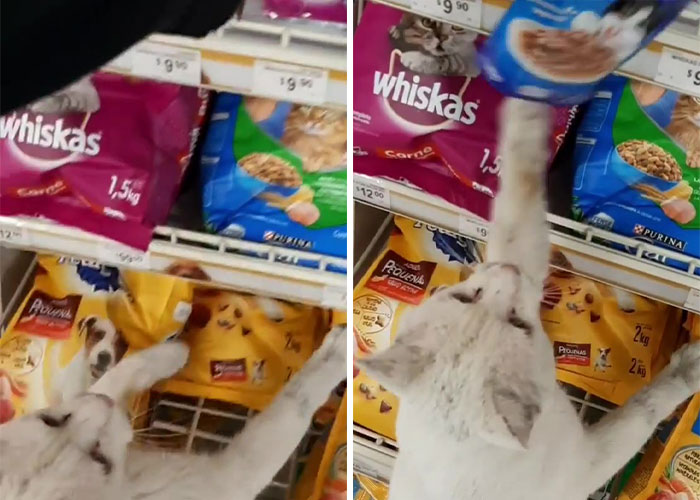 Tania wanted to know who the cat belonged to, but none of the shop assistants knew, as the cat returned daily and snuck out once it had finished her meal 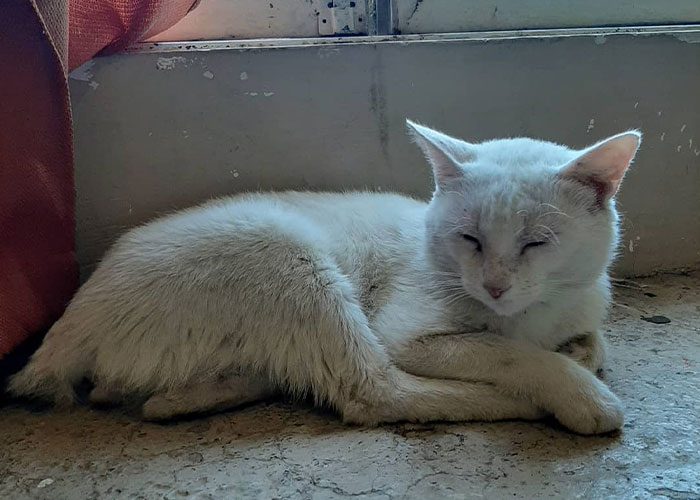 After buying the feline its dinner and other items, she went home. Soon, she was on her way back to the shop with the expectation of seeing her four-legged friend again. But to no avail. There was no sign of him. Disappointed, she headed for the store, but her dismay wouldn’t last long.

She noticed a familiar figure loiting about the shelf of treats, expectedly waiting for its next prey. Tania grew curious, wanting to know who this cat belonged to.

Talking to some shop assistants, they revealed that the cat had made it a habit to come in daily and use its cunning abilities to convince people to buy him treats. Once satisfied, the cat would disappear for a while, yet no one knew where to. 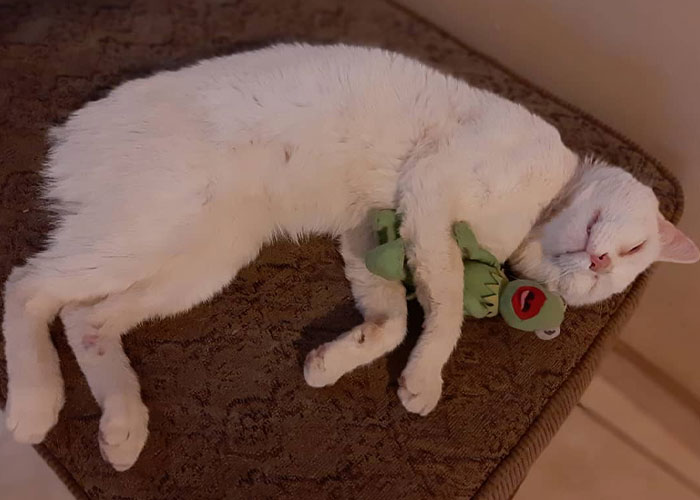 Tania made it her personal mission to find out. The third time she went to the store, she decided to film the cat’s clever coaxing and persuasive behavior. She bought the awaiting animal some food and then, when it ran off, followed him in secret.

A little while later she realized that what the feline called home was an empty patch of land by the side of the road. With no real shelter or family, Tania decided to change the cat’s life for the better. “I took him to my house and I adopted him,” she told The Dodo.

With no real shelter or family, Tania decided to change the cat’s life for the better by adopting it 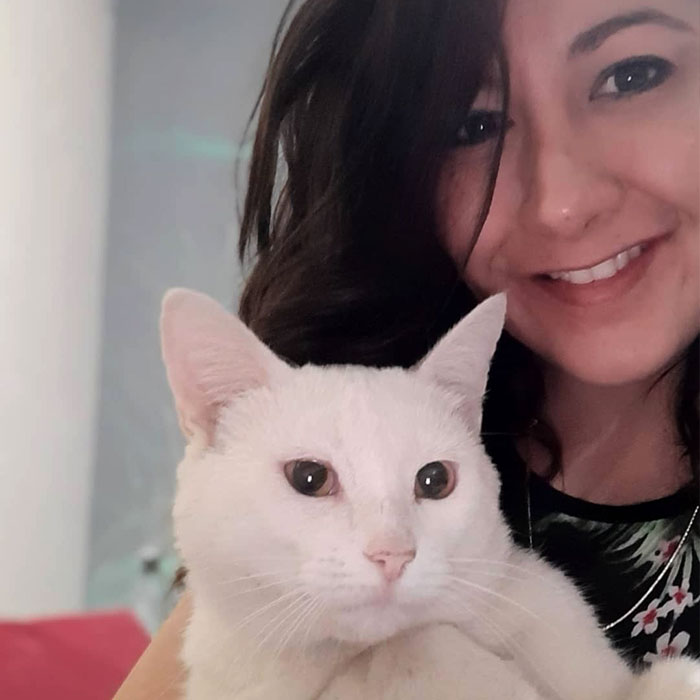 To be completely sure that no one was the cat’s owner, she went back to the store and told the workers of the adoption. They reassured her that “no one had come looking for him” and they thanked her for taking the cat home.

Before heading back home, she decided to buy some snacks for her cats: “I bought him many treats. He can trust that I always will.” 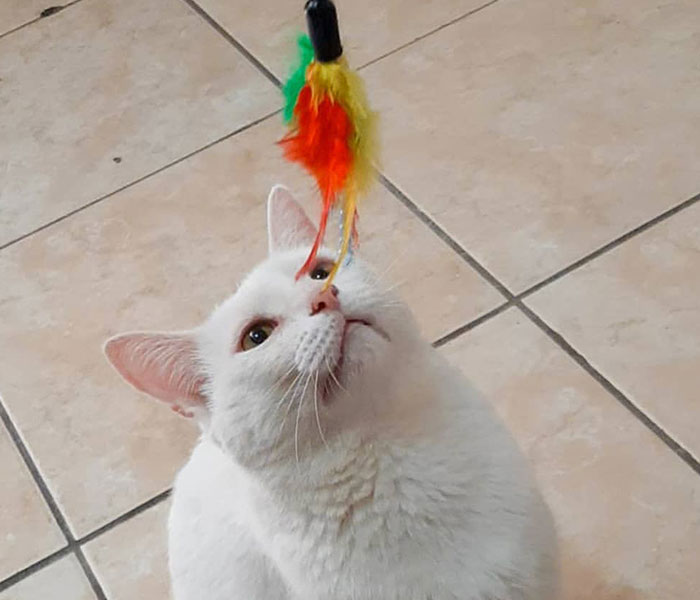 It’s unclear how long the cat had been homeless for, but life on the streets was no walk in the park. Tania found him with his fur a bit matted, multiple wounds, and a missing tail.

She said in an Instagram post: “We don’t know if it was due to mistreatment by people or simply because he was in fights with other animals on the street. He allowed us to touch and carry him but he was very sad and fearful all the time.” However, he managed to make a full recovery thanks to Tania’s care and pampering.

Life on the streets was no walk in the park, as the cat’s fur was matted, he had multiple wounds, and his tail was gone 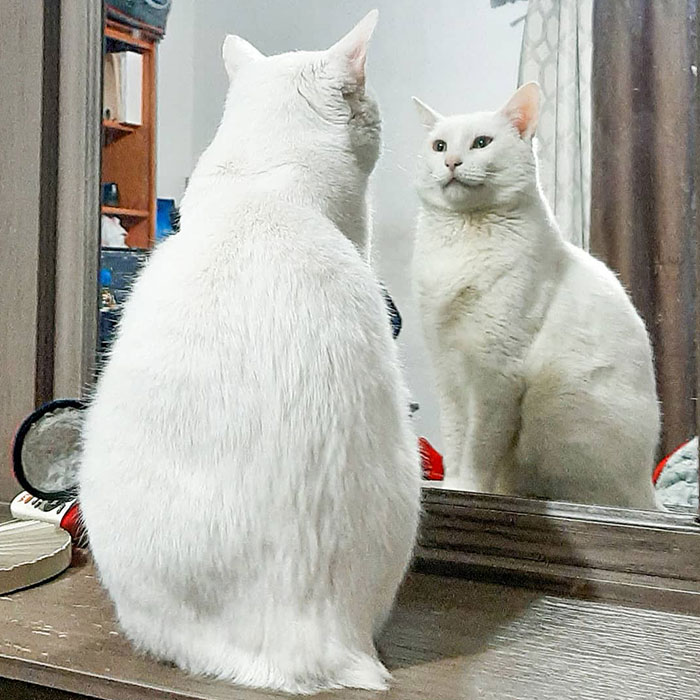 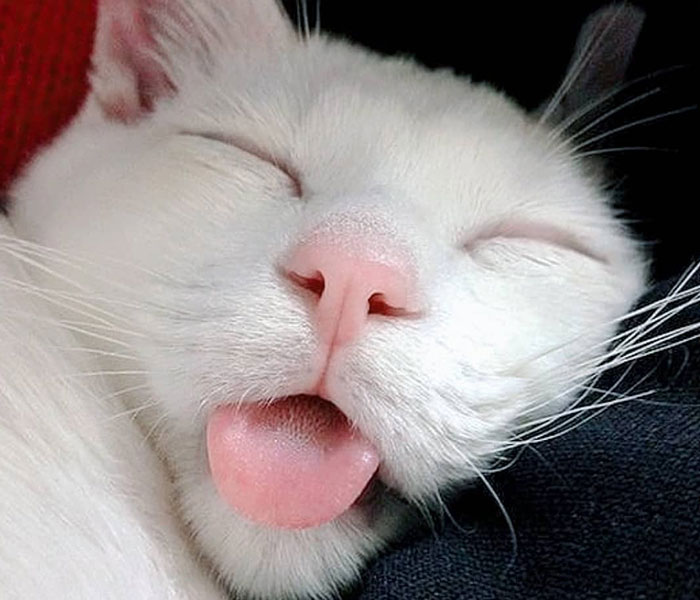 Now the cat enjoys his days spent in his new home with a kitty sibling named Zulem and all the treats he could ever imagine. A truly happy cat and a happy beginning to a new chapter in its life, all thanks to Tania. She’s been loving every moment with her new family member and is determined to give him all the care and love he deserves.

Tania started an Instagram account documenting their journey and sharing their incredible story. At the moment of writing, they have 26.8k followers enjoying the fabulous cat and his adventures. She named the cat Conejo, which means ‘Rabbit,’ a homage to the feline’s missing tail.

He managed to make a full recovery thanks to Tania’s care and pampering. She named him ‘Rabbit’ as a homage to his missing tail 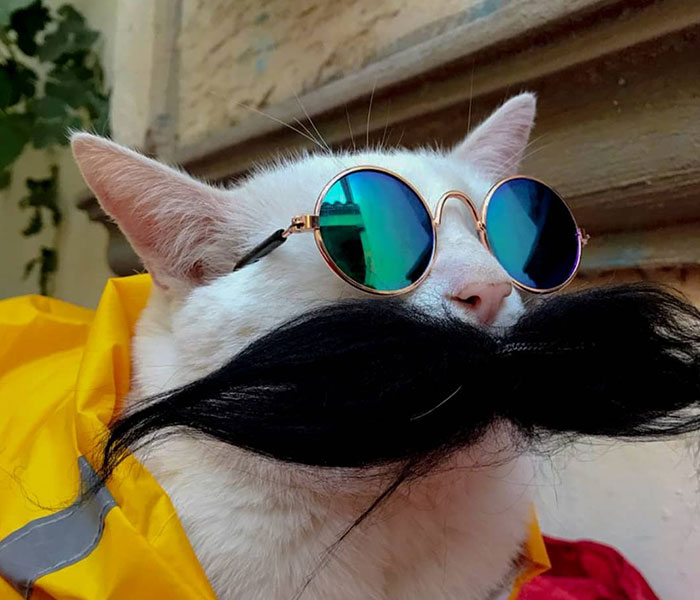 But Rabbit wasn’t the only one healed on this journey. As Tania revealed in an Instagram post: “I was going through very hard times. I had asked for a sign of hope and, suddenly, a little furry animal that always waited for me outside a store shook my life. He became my partner and through him I saw how lucky life is.”

Around the globe, there are millions of cats without a home. Just in the US alone, as reported by Tuckahoe Veterinary Hospital, there are an estimated 70 million wild or feral cats, and the number is expected to rise. This includes abandoned and lost cats and those born in the wild. 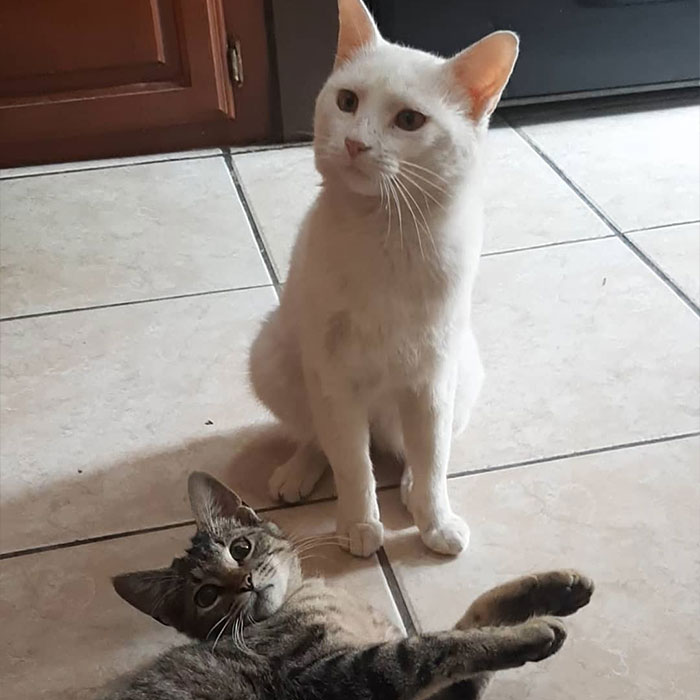 These cats and kittens can do nothing more than learn to fend for themselves and that involves getting quite crafty in order to keep themselves fed. Bored Panda wrote about a thievy seagull nabbing crisp packets from stores in the UK, so it’s not surprising that cats would follow a similar pattern.

Of course, not everyone can take in a stray animal and provide it with a home. Whether it be allergies, financial difficulties, or anything else, there are still outlets and means to help those that can’t fend for themselves. According to the RSPCA, you should try your best to find the cat’s owner, as sometimes cats wander a bit too far for their own good. If you’re not able to find the owner but are able to vaccinate and neuter the cat, please do, as you’d be potentially saving a little life. 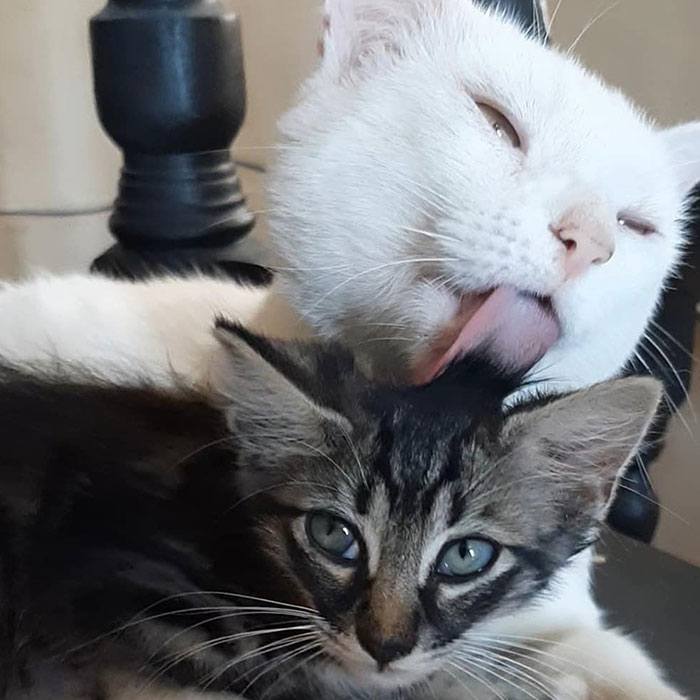 But Rabbit wasn’t the only one healed on this journey. “I was going through very hard times and, suddenly, a little furry animal shook my life,” Tania said 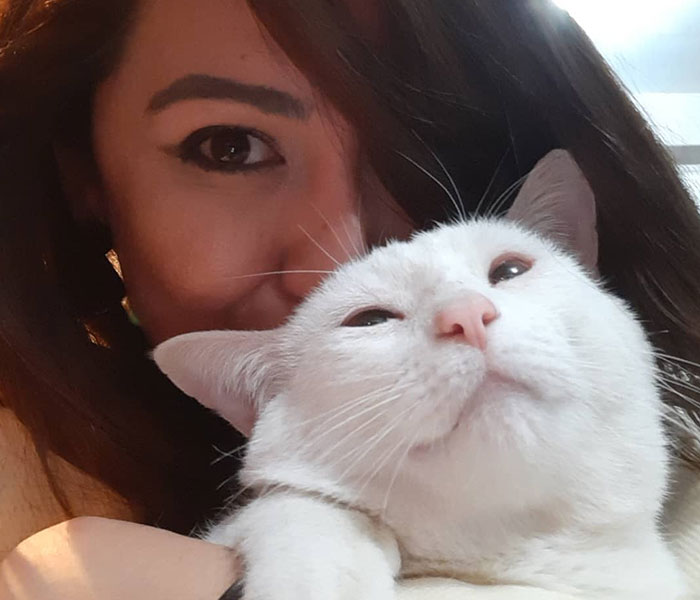 If you’re willing to help but are worried that you can’t afford it, you can contact your local animal rescue charity or a veterinarian. Most animal control facilities have severe budgetary or space limitations and must make painful decisions about how best to allocate their inadequate resources, thus, it should stay there as the last resort.

Finally, as noted by The Humane Society, be honest with yourself in answering these questions: Are you willing to add them to your household? And will you be willing to return them to their original home if the owner turns up after you’ve started to form an attachment? If you answer “no” to these questions, your best option may be to take the animal directly to the shelter or to contact animal control for assistance. 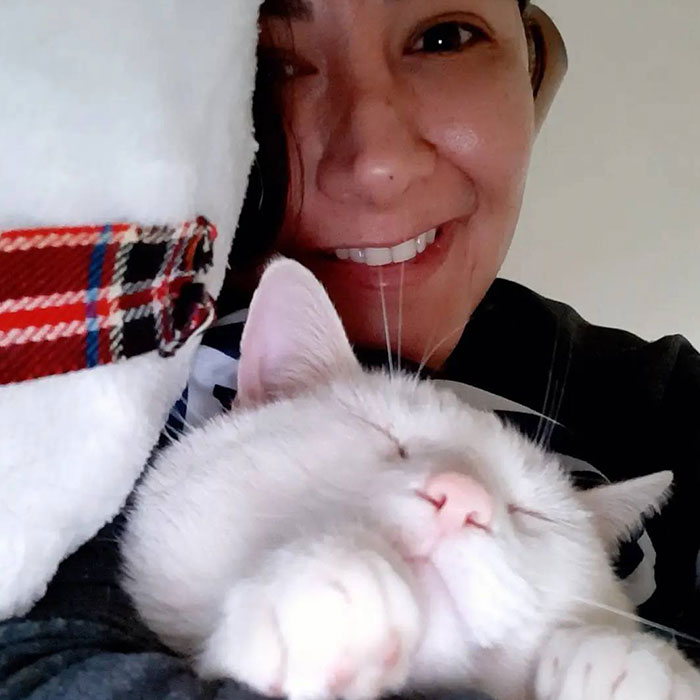 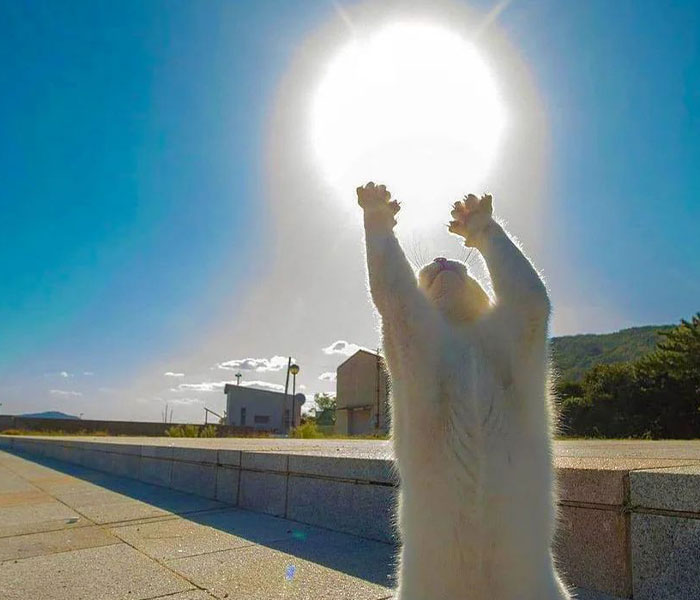 Thankfully, Rabbit and Tania’s story shines like a beacon of hope. We wish all cats a safe and prosperous existence, whether at home with their human companions or up in a tree taking a nice long nap.

As Tania says herself: “I think [Rabbit] taught us a great lesson that we should show respect, love and empathy towards other beings.”

Let us know your thoughts on this story, and I wish you all the best!

People loved this story, praising the cat for its genius idea. Let us know your thoughts in the comments!