I never had a good experience with a cat. When I was a kid, all the cats in the neighborhood would come to my backyard to shit in our sandbox. In grade school, I saw my pit musician father play the musical Cats, and my mom took me backstage afterwards to meet the cast, but I was so terrified I nearly wet my pants. They looked like something out of a horror movie. And what’s more, I’m allergic to cats. We just weren’t meant to be.

So you would assume that I’d have the opposite of excitement when first hearing about Stray, a video game that’s all about a cat who does, well, cat stuff. But a few years ago, I met a real-life cat named Nunzio. And everything changed.

It was when the Covid lockdown measures were first ordered. At the beginning of the pandemic, my then-girlfriend and I decided it would be safest to hunker down together, her and I–and Nunzio, who was like her son. It was my apartment or her’s, and I had the bigger TV. So she showed up at my door, litter box in one hand, suitcase in the other, and for the first time in my life, I had to live in the same home as a cat, allergies and all.

In the unforgettably surreal days of early lockdown, my future suddenly became very uncertain. Would we endure this pandemic? What would happen to the outside world? And could I survive in the same studio apartment as a cat? It all seemed terribly bleak. Stray has a similarly grim setup. You play as a nameless little red tabby, navigating a dystopian civilization, one that perhaps had been ruined by some kind of worldwide crisis–climate change, disease, nuclear upheaval, etc. The title from Annapurna Interactive released on July 19 for PlayStation and PC. It’s already been showered with praise from major critics and players, landing big compliments for its adorable story, its atmospheric score, and its gorgeous retro-future visual style.

But what’s really stoked my interest in my hours with this game is the reverence it has for, well, cats. Stray‘s titular alleycat is portrayed as a quiet, inquisitive furball, one who seems naturally intrigued by the people around it–androids or otherwise–and though, sure, the cat has no regard for personal property or objects sitting too close to a ledge, the stray has such a lovely personality. It is friendly. It is congenial. And, dare I say, it has reminded me a lot of my early days with Nunzio.

When Nunzio and I first became roommates, I began to recognize almost right away that most of my preconceived notes about cats were flat-out wrong. I don’t know how dogs won the reputation of being the only friendly, playful animal companions, because Nunzio was like a living teddy bear. Apparently, not all cats are the hissing, sharp-clawed loners who would rather gouge out your eyes than emerge from their stinky hutch beneath the bed. Some cats are…nice?

Nunzio never hid under the couch, never avoided human contact. In fact, he’d rush to the door when we arrived home. He’d even meow for us when we were down the hall! My partner’s beloved feline son seemed to love nothing more than to flop between us, throat rumbling, and fall to sleep in a little orb of body heat and purrs. Odd, I remember thinking. I was always told cats hated us!

Cats will never be man’s best friend. There is no cat equivalent of Lassie.

Now, obviously, I’m not saying that cats are disliked on the whole. Of course not. Anyone who’s spent a minute on the Internet knows that cats have an obsessive fanbase of their own. But for every cat-person out there, there are about ten blathering dog worshipers. Cats will never be man’s best friend. There is no cat equivalent of Lassie. In pop culture, they’re usually villains (Tom of Tom and Jerry, Azrael in the Smurfs, and don’t get me started on MacCavity), or lazy, pretentious jerks (Garfield), or weirdo little demons! They hang out with witches. They’re spooky. And they’re ragged, too–we don’t genetically modify our cats to be perfect snuggly toys. We take them out of the trash. Yuck.

The developers at BlueTwelve Studio obviously focused a lot of their energy on creating stimulating platforming puzzles, a world that feels both mysterious and lived-in, and a video game narrative that speaks to some real-world concerns. But for me, it’s the stray who stands out. Like Nunzio, the cat does not screech at friendly gestures from the city’s human(oid) dwellers. The game allows you to nestle beside them, to interact with and even soothe the survivors of this disaster-torn landscape. Press O to meow. Triangle to run your fur against their legs. And X to jump into their homes, to introduce yourself at their windowsill, to let your curiosity run free and maybe—with the help of a floating android who lives in your backpack—bring some light back into their dark, neon-scorched world. 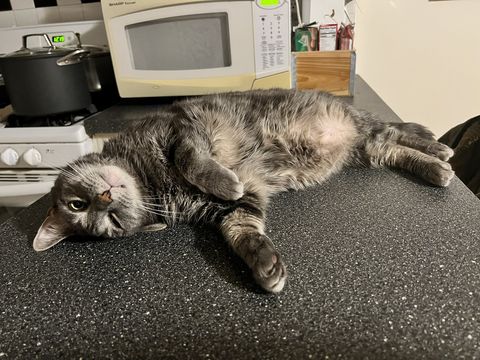 By now you have probably predicted where this was all headed. Nunzio’s sitting beside my keyboard right now, the cold dot of his nose brushing against the back of my hand as I type. He’s fast asleep, and I can feel the up and down of his tiny ribcage along my forearm. Every few minutes his tail wags around, his paws jitter, which can only mean one thing–he’s dreaming. And thinking back to everything that’s happened in the years since the lockdown, it all feels a bit like a dream. That girlfriend who moved in with me is about to become my wife–we’re getting married this weekend. Nunzio naps on the ottoman while we play video games like Stray together. And somehow, if you can believe it, I’m no longer allergic to cats.

You can buy the digital edition on the PlayStation or Steam stores. PlayStation Plus Extra and Premium members can download it for free.

Dom Nero is a staff video editor at Esquire, where he also writes about film, television, tech, and video games.