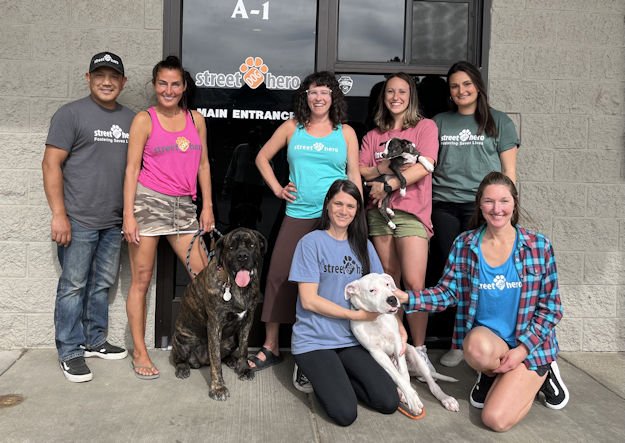 BEND, Ore. (KTVZ) — This month, Street Dog Hero marked its fifth year in operation as an international dog rescue and animal welfare nonprofit. The organization celebrated by hosting a five-year anniversary party and launching its first capital campaign for its new facility, dubbed ‘the Heroes Haven.’ The organization seeks to raise $50,000 to occupy the space for the first year.

SDH serves dogs in need around the world and their communities through rescue, adoption, wellness, spay/neuter, and education. Its five year anniversary and its first-ever brick and mortar are both milestone achievements for Street Dog Hero (SDH), which has rescued over 2,050 dogs and sterilized 2,250 animals since its inception in 2017.

The new facility is a key part of the organization’s strategic vision and it will allow SDH to greatly expand its services and opportunities for collaboration here in Central Oregon. The space will aid SDH in providing significantly more spay, neuter and wellness services locally, with a focus on areas and populations in which animals are least likely to receive care. The organization intends to begin regular vaccination clinics this fall, hosted at the new facility, and has begun planning regular spay and newer clinics as well.

With a surgical suite, kennels, office space, and storage, the new facility also offers SDH a ​​place to share in-person offices, host events, and train and onboard fosters and volunteers, as well as a place for the Heroes to land and launch from. Funds raised through the Heroes Haven Capital Campaign will cover rent, utilities, repairs, insurance, medical equipment, and supplies. Donors making gifts of $5,000 or more will be featured on SHD’s ‘Pawsmome Contributions’ art installation wall at the Heroes Haven.

Street Dog Hero is making lasting positive change in the lives of dogs and their humans, working towards a world where all dogs are healthy, safe, cared for, and wanted. Making such a large impact in the lives of owned and street dogs and cats, and the families that surrounded them, would not be possible without SDH’s supporters, community, and dog lovers around the world. The organizational values ​​inspire the interactions it has with all the four- and two-legged friends it encounters. SDH is committed to bettering the communities, people, and animals it serves.

Street Dog Hero programs operate on two levels simultaneously. Its Rescue, Foster, Adopt Program saves dogs that need to be rescued from neglect, hunger, and abuse, providing them with wellness, sterilization, transportation, fostering, and adoption. In the US, SDH has rescued and adopted dogs from Central Oregon, California, Texas, Ohio, and Puerto Rico. And abroad from Afghanistan, Albania, Armenia, British Virgin Islands, China, Guam, India, Mexico, Romania, South Korea, St. Thomas, and Thailand. And, its Spay, Neuter, Wellness Program addresses the root causes of pet overpopulation, while improving companion animal health and fitness but providing care like vaccines. To learn more about SDH, to foster or adopt, to volunteer, and to donate to the Heroes Haven Capital Campaign, go to www.streetdoghero.org.