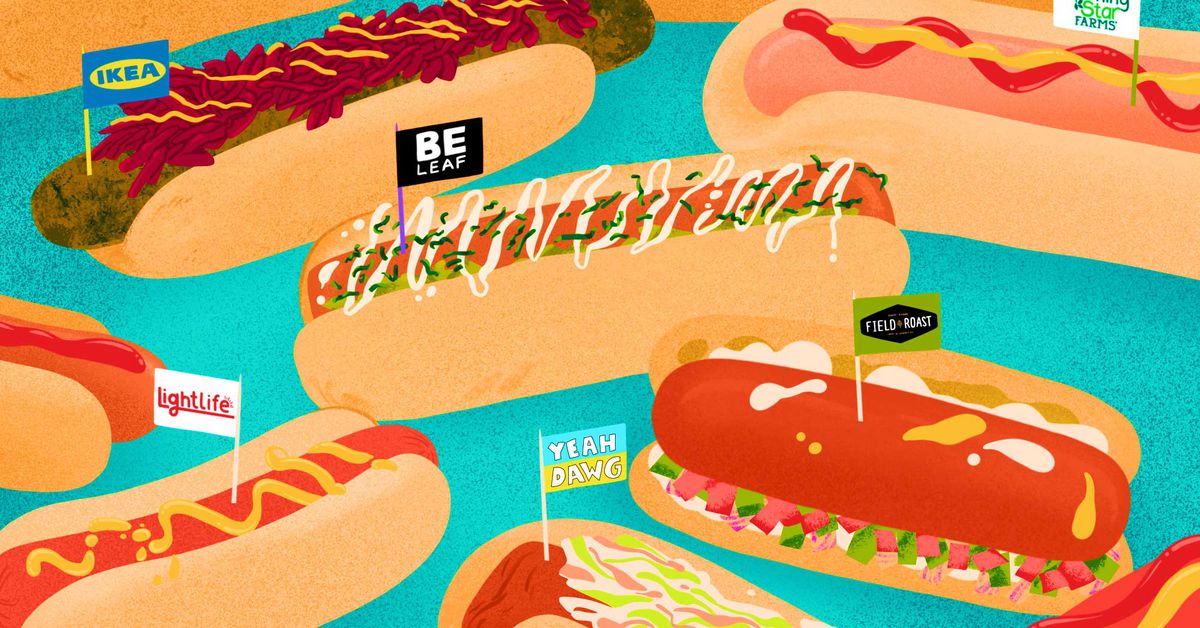 I’m not willing to admit how many years ago this was now, but when I turned 15, I became a vegetarian. Predictably, because I was a teenager, I was sanctimonious about it, chastising everyone around me for not caring about animals or the earth or whatever else I could think of that they should care about in my extremely informed opinion. Being vegetarian and caring about the world thank you very much was a very outsized part of my personality.

Back then, especially because I was 15 years old with little income and worldliness, I defaulted to what I thought were the best options for a vegetarian to eat. Namely, fake chicken nuggets and hot dogs, with the occasional chickpea dish thrown in for health. I didn’t know where to find these things — nor did I know there were any other places — besides my local Acme, a grocery chain in Philly that is basically fine. My hot dog choices back then were Smart Dogs and MorningStar Farms Veggie Dogs. And out of necessity, I loved them both.

Fast forward [redacted] number of years and the landscape for vegetarians has completely changed. The breadth and availability of products means that it feels easier than ever to forgo meat, even if the taste of meat is still your thing. Developments in mushroom-based meats, vegetarian burgers that “bleed,” and brands getting into plant-based products of all kinds means that the hot dog section of the freezer or fridge aisle is no longer a sad, lonely place where bossy teenagers get their kicks. For a number of years now, barbecues haven’t been the same.

Whether you are a vegetarian or vegan, hosting someone who is, or just generally interested in eating more plant-based foods, the new products on the market are almost too numerous to consider. What’s a person to do? How to decide what to serve? How to even understand what your preferences may be?

There are a few ways to figure out where you stand on the vegetarian hot dog spectrum: Do you prefer a simulacrum of a hot dog and its smoky, meaty flavor? Or are you looking for something totally original in its taste? Is the semblance of health important to you or do you prefer to feel like everyone feels after eating a hot dog (like you need to lie down)? How do you top your dog and does that factor into how you assess the flavor? And, likely most important of all, how does it perform on the grill — does it blister, does it burn, does it fall apart?

In mid-April, I gathered an esteemed group of friends — vegans, vegetarians, and meat-eaters, even one professional chef — to assess 10 brands and varieties of vegetarian hot dogs for these exact qualities. The hot dog taste test (incidentally, also the name of an amazing illustrated book by BoJack Horseman‘s Lisa Hanawalt) was judged on a scale of 1 to 10, with 1 being the worst and 10 being the best. Hot dog raters were then asked to provide tasting notes and a yes or no answer to whether they felt the vegetarian hot dog was similar enough to a real hot dog, in case that was something that mattered to them. So if you want add vegetarian hot dogs to your cookout repertoire, here’s some guidance on where to start.

The Best of the Best

All those years ago, MorningStar Farms Veggie Dogs (as well as MorningStar Farms Veggie Chik’n Nuggets) were the go-to for vegetarians looking for a standard veggie meat product that tasted adjacent enough to the real deal that it was actually worth eating. To my surprise, MorningStar’s vegetarian hot dogs have really held up over the years. With the highest rating of the group, every single participant noted that the dog tasted similar to a real hot dog. “The inside was so hot doggy,” one friend wrote. Others remarked on the sweet, tomato-y flavor of the dog, and that it had a nice smell and look, though the grill chef noted that it browned too quickly. The MorningStar dog also fits rather neatly into a bun, so when concealed with toppings, it could convince even the most dedicated meat-eater that this dog is no joke.

Most people associate Ikea with furniture that’s hard to put together, relationship-ending fights, and cheap, satisfying hot dogs. Nothing feels as good as buying a particle-board nightstand while stuffing a hot dog in your face and wondering if you and Jamie are really meant to be together. Not many people, on the other hand, think of Ikea and vegetarian hot dogs in the same way, likely because not many people know that Ikea makes them. A friend wears by them so deeply that he came to the party with his own in tow. And what a surprising result: The hot dog — which is actually more like an old-school veggie patty, with kale, lentils, quinoa, onions, and wheat protein, all smooshed together and visible — came in second place. “Nice to see the vegetables!” one friend wrote. “Kinda good. Looks and tastes like food,” said another. “Like a healthy egg roll,” chimed in a third. Though no one said it tasted anything like a real hot dog, that didn’t seem to matter.

Among the fake meat varieties, Field Roast has historically been one of my — and many of my colleagues’ — absolute favorites. The smoked apple and sage sausages are in my regular lunch rotation. But I hadn’t ever tried their so-called signature stadium dogs, and on the list of veggie dogs, Field Roast ranked high for one specific quality that no hot dog should be without: smokiness. Almost every participant said that the Field Roast ballpark dog tasted like a real hot dog (save for one comment: “Meh”), but smokiness came up more than a handful of times. “Smoky, snappy texture,” one wrote — just like a hot dog from the ballpark should be. There was a slight oiliness that didn’t appeal to the crowd, but maybe that’s just what you’d expect from a stadium dog. Or as one friend put it, “Compact but vaguely realistic, I guess.”

Say what you will about the difference between sausages and hot dogs (all hot dogs are sausages, but not all sausages are hot dogs, or something? I don’t know) but when you’re a vegetarian and have limited options, sometimes it’s best not to quibble over the details. Though Beyond Meat’s bratwurst sausages were unlike most standard hot dogs and more something you’d want to eat with pretty roasted peppers, they were damn good. They had a nice snap when you bit into them, and a fatty quality just like sausages normally do, though some disliked the greasiness. Many noted that they weren’t comparable to regular hot dogs (a perhaps disqualifying offense, but once again, beggars can’t be choosers), yet appreciated the “meaty, smokey” flavor. One friend mentioned their “breakfasty” taste. While they were perhaps too chunky for breakfast, they had a nice savoriness all the same.

Tied for the fifth place were hot dogs from Lightlife (the brand that makes the Smart Dogs I remember eating in my youth) and Very Good Butchers, a newer brand whose hot dogs are made from ingredients like navy beans, onions, and wheat gluten, and encased in must-be-removed plastic. The Lightlife dog, much like the MorningStar dog, hit some of the marks when it came to true hot dog comparison. Neutral hot dog. Perfectly acceptable,” one participant wrote. “Quite hot doggy,” said another. The Very Good Butchers option was pretty salty to most, with a flavor confusingly similar to that of a corn dog — though that wasn’t necessarily a turnoff. “Flavorful and moist,” one friend noted approvingly.

Flawed But Maybe They’ll Work It Out

Given all of the attention lavished on Impossible Foods, it was inevitable that the company would one day unveil a veggie hot dog and sausage line to match its bleeding fake-meat burgers. Like Beyond Meat’s sausage, Impossible’s bratwursts felt a little like they snuck into a party through the back door. But unlike the former, Impossible’s were more breakfast-y than a dinner or lunch sausage, with a pretty heavy herb quotient. “Herby but not synergistic,” one friend wrote, which I still don’t quite understand. They had an “overwhelming taste” to another, with a slight sweetness that many liked. The downside was there was a not-especially-nice aftertaste. “Tastes like a breakfast-y hamburger,” said one. If that’s a genre of food that you’re into, this may be for you.

On the lower-ranked end of the spectrum, taster commentary turned almost exclusively to the unnaturalness of the flavor, which is similar to the criticism sometimes leveled at meat hot dog brands. When does a tube of processed meat start tasting like a tube of processed meat? BeLeaf dogs had the appearance of a hot dog, but their flavor tried way too hard to mimic the real deal. “Can only taste smoke,” one friend wrote. “Too smoky,” said another. The texture wasn’t bad and resembled that of a hot dog in some ways, but overall felt like a poor attempt to mimic a beloved barbecue staple. “Tastes like generic plant protein,” one friend wrote. Others were less convinced: “Whoa. Appears to be a hot dog but is quite fucked.”

Most vegetarians associate Tofurky with Thanksgiving: While everyone else is tucking into a bird, a well-meaning aunt presents you with a loaf of vital wheat gluten in the shape of a bulbous log. What happens, then, when this same log is made into a hot dog? To many, not much. “Cylindrical Tofurky,” one wrote. “Bland but oddly peppery.” Strangely, some noted that it tasted more like buttery pasta or matzo ball soup or corn than an actual smoky hot dog. The color, which was practically gray, also caused an uproar. It was so off-putting that it was hard to imagine the hot dog as anything other than a reconstituted Thanksgiving log.

Very few hot dogs received as much criticism as the Yeah Dawg brand, which is a shame because it’s one of the few with a fun name. The flavor was more like savory lentils and the texture was spongy and nothing like a hot dog. While lentils are a fun and frequent meal for vegetarians, you don’t necessarily want their flavor to show up in a hot dog — it’s better saved for a dish with rice. Weirdly, several participants compared to the taste to Stove Top Stuffing. Not a bad thing, but not a good thing, either.

Finally, in last place, is the Upton’s Naturals Updog, a truly salty hot dog with a texture that spoke to no one. “Maybe after an ultra-marathon,” one participant wrote, which is confusing feedback when you really think about it. Nearly every hot dog taste-tester commented on the saltiness of the Updog — “salty as shit,” one friend observed — and the fact that it tasted vaguely like Cajun seasoning. Like the Very Good Butcher dog, it also tasted like cornmeal, which makes you wonder if veggie hot dog brands should pivot to corn dogs instead. (Though for the record, it contains no cornmeal.) Eating vegetarian hot dogs all night long may not be most people’s chosen activity (in fact, many tasters requested a real hot dog at the end of the night), but their range gave many of us something to think about — and also some options to bring to a barbecue. Updog, unfortunately, isn’t among them. As one participant wrote: “why.”

Nicole Miles is an illustrator from the Bahamas living in West Yorkshire, UK

The freshest news from the food world every day