These House Finches hatched in a hanging basket.

The birds have taken over the porch, not through dive bombing us or whitewashing the deck, but by the sheer force of their presence. It all started with a fern in a hanging basket that my wife got for Mother’s Day. Soon after, the House Finches started to look at it as their new home. The takeover started there.

If you have never seen a House Finch, they are really quite the pair. They are sparrow sized. The male is a vivid purple red color. The female is brown. On the porch, they are heard well before they are seen. They call in rich flutey notes from the Redbud tree, letting the world know they are there.

The finches quickly built a nest in the fern. Each day, a tiny light blue egg was laid in the nest. We reached up and felt them to count them. Somehow, it didn’t occur to us to pull the hanging basket down to look at them until five eggs had been laid. We pulled them out and looked at them and noticed that they were cool to the touch. The parents were not sitting on them.

Many birds lay one egg a day, but don’t sit on them until the last egg has been laid. According to “Birds of Forest, Yard & Thicket” by John Eastman, House Finches lay four to five eggs. The ones at our house laid six. As many an experienced naturalist has told me, “Birds don’t read the books”. Once all the eggs were laid, the mom sat on them for two weeks to keep them warm. Because the incubation time is roughly the same, all the babies hatched around the same time. The ones in the fern all hatched within about six hours, except for one that never hatched.

The young hatched eleven days ago. The parents immediately began to leave for long periods of time to gather food for the babies. Unlike many birds, House Finches feed their babies seeds that they gather. I tried very hard to see it, but never saw what the parents fed the babies. They would perch on the chain for the porch swing for a minute or two, then fly to the nest and start sticking their beaks into their babies open mouths. They regurgitate seeds into the babies mouths, though where they found the seeds I do not know.

The House Finches are getting ready to fledge, but their head feathers are some of the last to come in.

The parents must have found a lot of seeds to feed the young, because they grew really fast. Sleek adult feathers have replaced their fine baby fluff feathers. I expect them to leave the nest in the next couple of days.

It has been fun to have them nesting on the porch. It has been like a 24/7 reality nature show. It’s not unusual to hear someone shout, “Mom is feeding the babies!” followed by a rumble of footsteps as we rush over to watch.

It is easy to add human emotions and motives to birds that are nesting so close. On one of those recent superhot days, the parents simply stop feeding the babies. We pictured them relaxing in the cool shade of the hemlock trees with a “I am so DONE with this!” attitude. Perhaps they were too hot to feed and made up for it in the cooler times as the sun went down. I don’t know.

One day, another House Finch couple arrived. A new male came, then a female. They approached the nest and the males flew off, leaving the mom alone on the nest. The strange female arrived and perched near the edge of the nest, looking at the young for five minutes or so, then simply flew off.

What was happening? Was this one couple trying to get into another’s territory? Was this a couple with a failed nest looking at the hanging basket as a good nesting option? Were these birds part of the larger flock of House Finches that gather each winter at the bird feeder checking out the newest members of the flock? Was it some alien bird motivation that I will never comprehend? The truth is, I have no idea what was going on when that other couple came to visit.

Photos by Jeff Tom. The mother and father House Finches regurgitate seeds for the young to eat.

It all got even weirder this morning. I am well used to the deep lilting “What” call of the parents. The babies are remarkably silent. This morning, a small flock of “What” calls were coming from the porch. There were three pairs of House Finches perched on the porch. The hung in a line down the chain on the porch swing, all staring at the nest in the hanging basket.

What? Again, I couldn’t help but speculate using human things. Were they all looking at the new members of the flock? Seeing a successful nesting site? Seeing the egg that didn’t hatch which had finally been kicked out of the nest? Were they there to see the young and be there to help when they fledge soon? Again, it is more likely some weird bird thing that I could never guess in a hundred years.

That may be why nature is so captivating to me. It’s alien. I don’t understand how or why the birds are doing what they do, but watching them on the porch is like getting a peek into the bird world that I rarely get.

Audubon Community Nature Center builds and nurtures connections between people and nature. ACNC is located just east of Route 62 between Warren and Jamestown. The trails are open from dawn to dusk as is Liberty, the Bald Eagle. The Nature Center is open from 10 am until 4:30 pm daily except Sunday when it opens at 1 pm More information can be found online at auduboncnc.org or by calling (716) 569-2345.

Photos by Jeff Tom. The mother and father House Finches regurgitate seeds for the young to eat.

The House Finches are getting ready to fledge, but their head feathers are some of the last to come in. 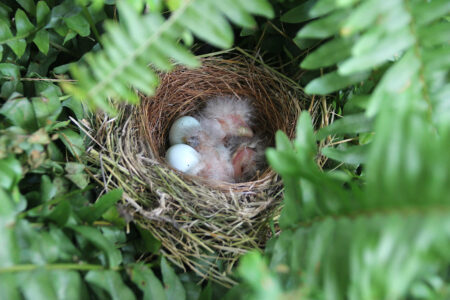 These House Finches hatched in a hanging basket.

Today’s breaking news and more in your inbox

Fish-for-Free Day No fishing license is required in Pennsylvania on Independence Day. The Pennsylvania Fish and …

The following students graduated from Clarion University during May commencement ceremonies: Alexander Fincher, …