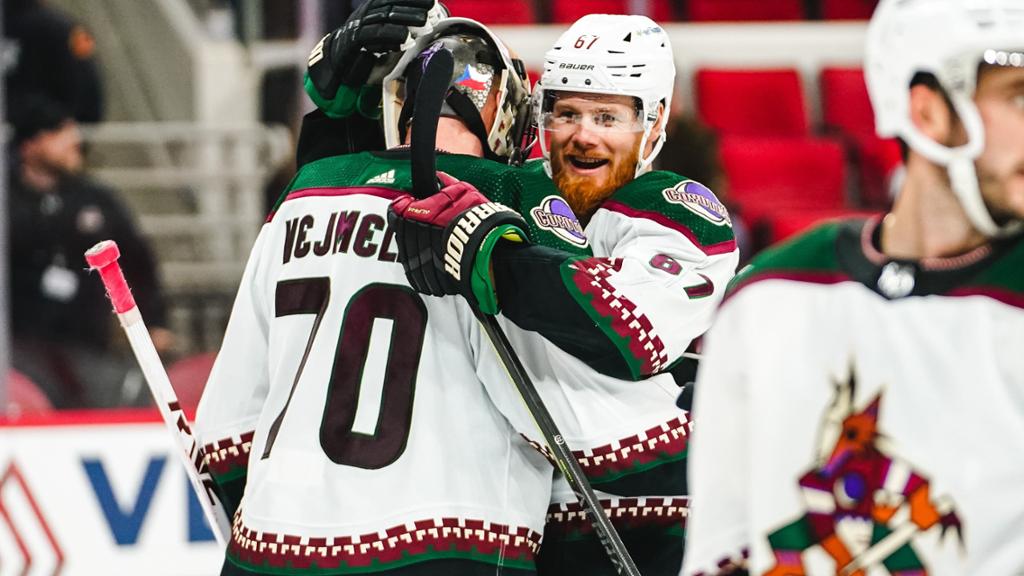 The Arizona Coyotes are most certainly thankful for Karel Vejmelka.

‘Veggie’ made 36 saves in his second shutout of the season, nick schmaltz, Lawson Crouseand Nick Bjugstad scored, and the Coyotes (7-9-2) snapped a four-game losing streak with a 4-0 win over the Carolina Hurricanes on Wednesday.

It was Vejmelka’s third career shutout, and second in as many weeks.

Pyotr Kochetkov made 22 saves for Carolina (10-6-4), which was shut out for the second time this season.

Vejmelka, who became the first Coyotes goalie to record two shutouts in a calendar month since Darcy Kuemper did so in November 2019, put together his best performance of the season in front of his father, who was in attendance for the team’s annual dads trip.

The win was even more meaningful considering it was the first time he got to witness his son play a game in the NHL.

“It’s unreal. It’s a dream,” Vejmelka said. “We really enjoyed a couple of games together… I can’t believe it. I’ve never watched an NHL game live, so it’s something special for us and for our family.”

Coyotes head coach André Tourigny couldn’t have asked for anything more from his netminder, who improved to 6-5-1 on the season.

“He was solid, he was quick, and he looked in control,” Tourigny said. “They had a lot of deflections, a lot of pucks thrown at the net where the puck can deflect into a broken play. It was not an easy game, so great job by Veggie.”

With Vejmelka in control between the pipes, Arizona’s offense went to work.

Schmaltz opened the scoring with his first goal of the season just 1:06 into the game, sniping a wrist shot past Kochetkov after carrying the puck through the neutral zone and into the offensive zone.

Tweet from @ArizonaCoyotes: Confirmed: nick schmaltz is back. 👏 pic.twitter.com/U1rAQIiGo7

Crouse made it a 2-0 game 1:52 into the third period, backhanding the puck past Kochetkov just seconds after a power play expired.

Bjugstad recorded his third goal in two games after wristing a shot past Kochetkov from the slot midway through the frame before Crouse added his second of the game into an empty net.

Arizona went into the first intermission with a 1-0 lead despite being outshot 14-1. The team stayed true to its gritty, hard-working identity throughout the game, blocking 30 shots compared to Carolina’s 11.

defense man Troy Stecher set the tone for the Coyotes in the first period in a sequence where he blocked a shot and suffered an arm injury, but stayed on the ice to block yet another blast.

Though Stecher went to the locker room for evaluation following that shift, he returned for the second period and finished the game with 13:08 time on ice and three blocked shots.

“You’re on the bench and you feel like you have to do it, because you see your teammate do it,” Tourigny said. “Now you end up blocking a ton of shots like we did tonight and play with urgency.

“That’s leadership, that’s what you can do for your teammates sometimes, and Stech was a big part of our win.”

The Hurricanes ended up outshooting the Coyotes 36-26, but Vejmelka’s heroics — combined with the scores of blocked shots — secured the win for Arizona.

Arizona is back in action against in Detroit on Friday, and the game will be broadcast on Bally Sports Arizona Extra (TV) and ESPN 620 AM (Radio). Puck drop is scheduled for 6 pm MST.