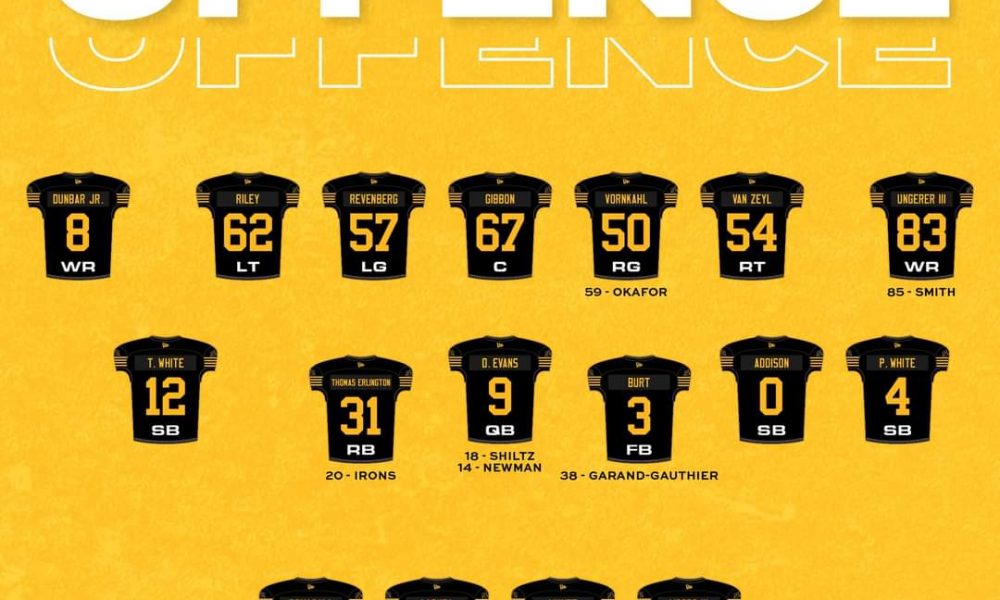 The difference between winning and losing in the CFL comes down to a few key elements every week. Preparation, execution, and adjustments are the recipe that every team needs to master to have a chance to bring home a victory every week. As the Tiger-Cats prepare to face the Stampeders in their home opener at 6:30 pm on Saturday, head coach Orlondo Steinauer reflected on this week of practice. “We are prepared and each week is a test,” said coach Steinauer. Quarterback Dane Evans mentioned that the key to CFL success is to “Focus and then re-focus, and who can make the best adjustments the fastest.” Running back Sean Thomas-Erlington also said, “we have to execute as a team.” The Tiger-Cats know how to win, they have played in back-to-back Gray Cup championship games. With this in mind, the Tiger-Cats have made some significant adjustments from Week 1 to Week 2 in 2022.

Offensively, the Tiger-Cats have revamped their offensive line this week. Tyrone Riley is a new addition to the starting offensive line. Riley has been activated from the practice squad to take on the challenge of filling the Tiger-Cats gap at left tackle. Coming into the season, it was well-known that Hamilton had issues at the left tackle position. In week 1, Travis Vornkahl played left tackle but will now be starting at right guard. Jesse Gibbon has been moved to the centre, which was necessary due to Alex Fontana suffering an injury to his knee that has kept him out of practice this week. Fixtures on the Tiger-Cats offensive line, left guard Brandon Revenburg and right tackle Chris Van Zeyl will be expected to be leaders of this unit. After facing criticism all week, it will be interesting to see if this new combination of linemen will produce better results.

Defensively, the defensive front has also seen a few adjustments. In Week 1, Mason Bennett was listed as a 2nd-string defensive end but this week he will get the start. Rushing the passer is an area that the Tiger-Cats defense quickly needs to improve. For the 2nd week, Simoni Lawrence will be playing on the weakside with Jovan Santos-Knox starting at middle linebacker. Jovan Santos-Knox mentioned, “the 2nd game we should show the biggest improvement”. Last week the Hamilton defense successfully contained the Roughrider’s offensive playmakers for 57 minutes, but in the last few minutes, they were unable to hang on. This week they will be facing another potent offense that is balanced and has multiple playmakers. For the Tiger-Cats to have a chance to win this defense will need to be able to stop the run, pressure the quarterback, and prevent explosive plays.

This Saturday the ability of the 2022 Tiger-Cats to prepare, execute, and adjust will be on full display. Many times this week the Hamilton players mentioned not being as focused as they would have liked to have been heading into the game at Saskatchewan. With a week to prepare, the focus of the Tiger-Cats needs to be on executing at a high level and getting better. If every week of the season is a test for these Tiger-Cats, will they pass the test against the Calgary Stampeders? We will all find out Saturday at 6:30 pm at Tim Hortons Field in Hamilton.