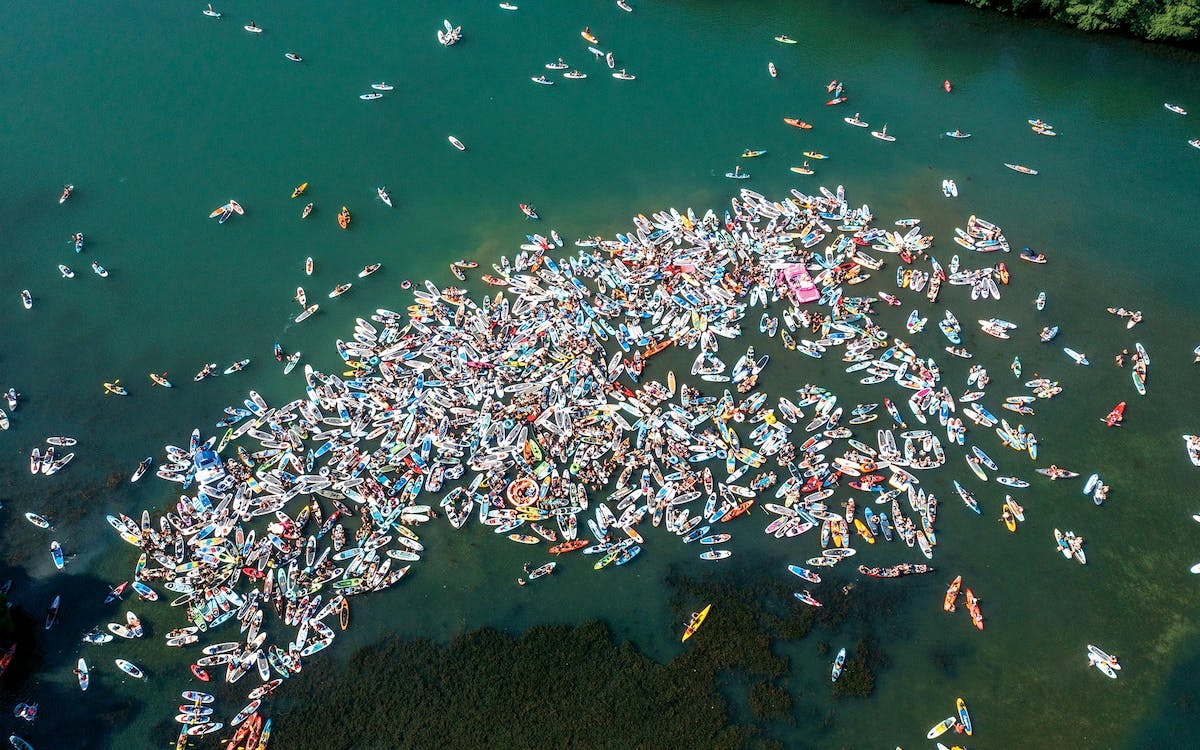 The best thing about good-looking people is that they tend to draw even more good-looking people. So it is with Party Island, a gathering of hundreds in the middle of Austin’s Lady Bird Lake. On a 97-degree Saturday afternoon in the middle of May, legions of hotties had appeared near Lou Neff Point. Most balanced on paddleboards, though some peacocked with more elaborate floatation devices.

The first time I saw the “Brotilla,” so dubbed by Redditors, I was canoeing on the lake in 2020, during the oppressive juncture of the COVID-19 pandemic when there was nowhere to socialize but outside, but outside was too hot. My boyfriend and I navigated our canoe through the floaters gingerly, like we were in the returned lifeboat in the final scene of Titanic. Party Island was less populous then, as was Austin, but even so, there were bodies as far as the eye could see, shimmering on the horizon. The mass has grown each subsequent summer. From Lamar Boulevard Bridge, downriver, Party Island is visible in all its crowded glory, fanning out from its jam-packed center like the Spiral Jetty.

For the most part, I had avoided Party Island since my first foray, chiefly because I do not wish to marinate in the fluids of my fellow man. That afternoon in May, I voiced this concern to someone who looked like a Party Island veteran. He was wearing sunglasses, but I could tell he was rolling his eyes. “You look like an ocean girl,” chimed in his friend, who was visiting from Florida, from atop a nearby paddleboard. “This is no worse than the ocean.” But it is. Later in the afternoon, as I stood waist-deep in the water, watching a fantastic black Lab named Pearl swimming laps in the channels between floats, a Good Samaritan alerted me to an alarming sight rising behind the poo-petrator.

But most of the party dogs perched harmlessly on paddleboards in canine life vests, and most attendees seemed unperturbed by the gross realities of stewing in the broth of the masses for an afternoon. One seasoned Brotilla-goer had arrived that morning, before the crowds of floaters assembled, to inflate and dispatch a vast pink raft with a sparkly floor. Now adrift in the center of the horde of paddleboards, the raft looked like a conversation pit in a Barbie house. In aerial photos taken of Party Island that day, the raft is clearly visible on the northeast side of the fltilla; it was probably visible from space. Half a dozen young men and women lounged in it, drinking and surveying their surroundings.

Northeast of the pink raft, Matt Richelsen manned a floating grill that his wife, Ashley, had gotten him for Christmas. It had been a good haul already, he said: he’d gotten six or seven beers in exchange for hot dogs.

Should someone have failed to bring a beverage, there were cans on offer. One man explained that he is trying to rechristen the gathering the Party Patch. When his friend gifted several passersby refreshments, he called out, “That’s what the Party Patch is all about: sharing drinks!” Nearby, Reily Reitmeier, a blond woman in a pink bikini, on leave from a military deployment, was locked in an arm-wrestling match across a paddleboard with Andrew Moran. Reitmeier yielded, and Moran triumphantly pushed her arm down on the board’s surface, but it was a measured victory, for she had won the round prior. When I waded away, Reitmeier was already subsumed in battle against a new opponent.

Presiding over it all was Dustin McInvale, who had sailed into Party Island on a floating deejay booth. High above the revelers, sitting shirtless atop a cooler that he used as a bench, he kept up a metronomic thumping bass. He stared tranquilly at his computer, of Party Island but transcending it—the loneliness and ecstasy of the aquatic deejay.

McInvale, a longtime Austinite, explained that he enjoys being at Party Island in part to encourage good behaviors. Like many Austin lifers, McInvale was raised with a militant attitude toward litter and said he’s okay with the crush of newcomers to the city—almost every floater I met had moved to Austin recently—as long as they respect their surroundings. Later in May he planned to debut a large “trash banana,” a yellow inflatable canoe, tethered to his float, where partygoers can put their trash. (McInvale is also Red Cross–certified, so if you find yourself in peril at Party Island, look for the deejay.)

He speculated that the Brotilla’s blowup over the past few summers was partly because of the sudden, pandemic-driven availability of affordable inflatable paddleboards. He estimated that two to four hundred people typically converge on Party Island during summer weekends, a good crowd for a deejay. He’s seen a man in a dancing-banana costume wiggling around to his music, and one time the whole crowd started sticking their paddles into the air along with the beat.

Most of the time, he said, Party Island is pretty tame. “It’s not too wild down there,” he said. “You’re in the water—you’re kind of limited with what you can do.”

An abbreviated version of this article originally appeared in the July 2022 issue of Texas Monthly with the headline “Beer Me! Where Cans Are Currency.” Subscribe today.