But now, Rhys is the No. 1 Swedish Vallhund show dog in the nation. Rhys competed in the June 20 at the Westminster Kennel Club Dog Show.

Westminster is an all-breed confirmation dog show. Rhys earned Select Dog, which equates to placing third. Arszman said Rhys has come a long way to place at Westminster. She noted that Rhys didn’t have a performer’s personality when she first met the dog.

“He was really shy, nervous, scared of his own shadow,” Arszman said.

Arszman grew up in a family that owned and bred dogs for showing confirmation, whereby judges look for how well the dog is built and suited for its breed’s job.

When Arszman graduated from college, she began showing her corgi in agility rather than confirmation. When her corgi died and a family friend, Sharon Pokorski, needed to find a home for Rhys, who will be 4 years old in August. Arszman was unsure at first about taking the dog.

Arszman originally agreed to co-own Rhys with Pokorski, who was battling Stage 4 lung cancer. Pokorski had found someone to care for a litter of Swedish Vallhund puppies while being treated for cancer. The puppies were bred from a 2017 Westminster champion, but Arszman said they weren’t in the best of shape because Pokorski couldn’t care for them.

Rhys was one of the puppies. Swedish Vallhunds are considered a cousin to the corgi breed.

“Sharon came to my mom and said, ‘I would love for Megan to take Rhys for a little bit. She can help turn him around,’” Arszman said.

Arszman calls Rhys her “foster fail” because she now fully owns him, which she never planned to do. She had only shown dogs in agility and never in confirmation, but Arszman received many compliments about Rhys. So, she enrolled Rhys in classes at an obedience club.

Arszman’s grandmother owned a kennel, now known as Bed and Biscuit Boarding Kennel in Jolietville, a small town northeast of Zionsville and west of Westfield.

Stahr said Rhys is a pleasure to show.

“(Arszman) has him very well trained,” said Stahr, who lives in Booneville. “Between his training and attitude to want to show makes all the difference in the ring. He wants to be in the ring and getting the extra attention and cookies, of course.”

“Dogs that have jobs, they love their job. It’s so cool to see him show,” she said. “When you get ready to show him, when you take him into the building where the rings are, he does his fancy prance. His head is held high, and he knows he’s good looking. He’s there to win. It’s been a fun ride with him.”

Rhys’ registered name is GCH Hightower Frontier’s SmoothAsBourbon, because his color is similar to the color of bourbon. The name is also a nod to the fact Arszman lived in Lexington, Ky., for many years. Hightower is Pokorski’s kennel name and Frontier is Arszman’s family’s kennel name. 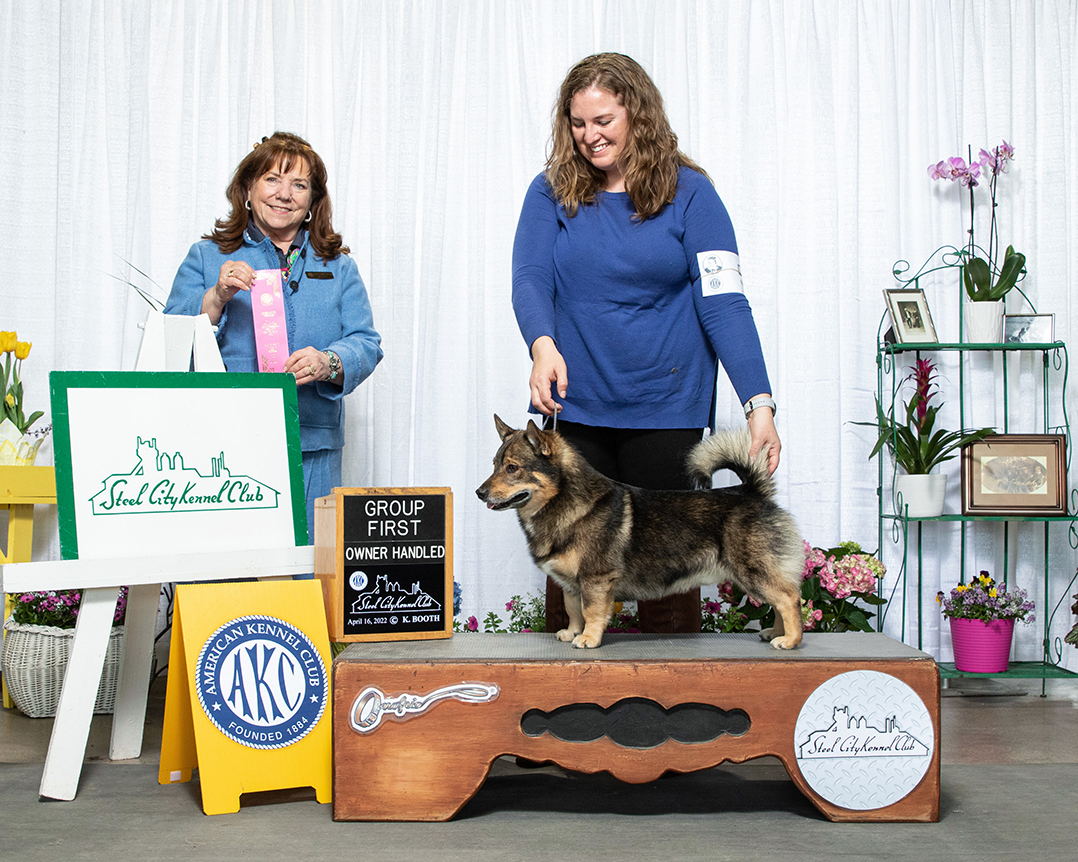 An opportunity to show

Megan Arszman said she wasn’t in favor of sending Rhys to Westminster until she learned the competition was held outdoors.

“They were supposed to have it back in New York City in January, but because of COVID, they pushed it back again to June to have it outdoors at the Lyndhurst Mansion. Because of that, I entered him,” Arszman said.

Arszman said Rhys is still nervous, and there are loud sounds at Westminster, specifically when the competition is held indoors.

Rhys will be 4 in August.