For years now, North Hempstead resident Stuart Kroll has been speaking up at town meetings and advocating for the town to build a cat shelter. North Hempstead doesn’t have a town cat shelter for stray cats to be cared for and placed with a family.
While the town does have an animal shelter located at 75 Marino Ave. in Port Washington, the shelter only houses dogs. Many people assume that since the town has a shelter, the shelter must take cats. But, unfortunately, that is not the case at the North Hempstead Animal Shelter.
“People don’t even realize this problem exists,” Kroll told The Port Washington News.
Kroll explained that one of the reasons cats aren’t incorporated into the North Hempstead Animal Shelter is the lack of space.
“This issue goes back to Jon Kaiman,” Kroll said. Kaiman was the town Supervisor from 2003 to 2013. “The idea was that 80 to 90 percent of cats would be euthanized because of space issues so, understandably, he didn’t want to place cats there. But no respectable shelter puts any cats down unless they’re terminally ill. No private shelter and no decent municipal shelter will do that either.”
Under Supervisor Judy Bosworth, the town did a feasibility study to determine how many cats the town could hold shelter. According to the survey, Kroll explained that the shelter could hold an estimated 33 cats. At the time, the town felt that number wasn’t sufficient, and while Kroll agreed, he realized it was naive to think the town would continue searching for a solution to the issue.
“I would say you need to have something that can hold 60 to 80 cats at a time,” Kroll determined.
When Jen DeSena was running for Supervisor, Kroll met with her to chat about the lack of a cat shelter. She was sympathetic to the issue and signed the petition from Voters 4 Voiceless. Kroll is the co-founder and active member of the Voters 4 Voiceless animal advocacy group. Over 2,000 people signed the petition for a town cat shelter.
The Voters 4 Voiceless group recently worked on getting the Puppy Mill Bill passed. 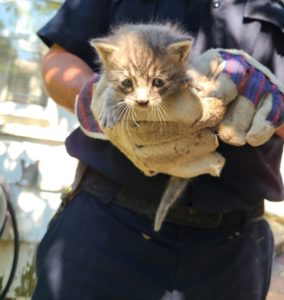 “That was a huge victory, and it shows that these victories can happen when dedicated people get involved,” said Kroll.
“We gave the town the [cat shelter] petition a while back,” said Kroll. “Since more than 2,000 people want the shelter, you would think something would get done. So many people have spent a lot of money and experienced a lot of heartaches trying to place cats themselves.”
Kroll is one of many people in the town of North Hempstead that work to capture stray cats and find them a home or shelter. Though the town doesn’t shelter stray cats, they have a TNR program (trap, neuter, release) that is held at the town shelter to help keep the stray cat population down. Residents can bring stray cats to the shelter on specific days when the program is running to have cats neutered or spayed. After the procedure, the cats are released back to where they came from, usually the streets.
“The people that bring in the cats to the TNR program will come to get them after the procedure,” said Kroll. “And if they’re friendly cats, they’ll try to get them adopted, and if they’re not friendly, unfortunately, they just have to release them back the streets.”
“When female cats are spayed, it’s a much more complicated surgery than male cats being neutered,” said Kroll. “Male cats can safely be released, but the female cats that are spayed should be able to stay a minimum of one or two nights, so the stitches don’t break open. It’s not safe to release them, and they are releasing them.”
While the program is meant to keep the cat population down, Kroll feels it is not working.
“It’s just getting more and more out of control because the TNR program is really pathetic,” said Kroll. “The North Hempstead shelter does approximately 1,000 cats a year, about 80 cats a month that they will fix. But when you go to the Town of Hempstead shelter, they have an excellent TNR program.”
“[The Hempstead shelter] could fix 80 cats a month there with one individual and they have multiple people working on the TNR program,” Kroll said. “One individual at the Hempstead shelter can do as much as the whole TNR program at the North Hempstead shelter.”
Kroll attends the monthly Town of North Hempstead Board Meetings to speak on the issue of stray cats having no shelter in the town. He hopes that consistently bringing attention to the problem will encourage the board to help and make the residents aware of the situation.
“I would tell [people concerned with the cat shelter problem] to go to the board meetings,” said Kroll. “If you want to change, you have got to make yourself aware and available. I encourage people to come to board meetings and speak up about the fact that there is no cat shelter and that these animals are suffering and starving in the streets.”